Keynote Speaker architect Sir Peter Cook, Royal Academy of Arts, London, signing his book.© Yale School of Architecture, photo by Susan Surface. In 1632 Rembrant van Rijn painted The Anatomy Lesson of Dr. Nicholaes Tulp, in which a doctor reveals the internal mechanics of the body for a rapt audience. A sense of wonderment envelops […]

In 1632 Rembrant van Rijn painted The Anatomy Lesson of Dr. Nicholaes Tulp, in which a doctor reveals the internal mechanics of the body for a rapt audience. A sense of wonderment envelops the scene as the doctor pulls taut the subject’s tendons with a pair of medical shears, while a meditative gaze and raised hand give him the presence of a divine figure. This striking image serves as an unlikely metaphor for the recently held symposium “Is Drawing Dead?” at the Yale School of Architecture from February 9-11. While its title suggests an ideological showdown, we witnessed something more like the anatomy lesson. The analog and digital camps may have given competing testimony of the role and nature (and vitality) of drawing, but what was shared by all was the articulation of the mechanics of the process that creates architecture. 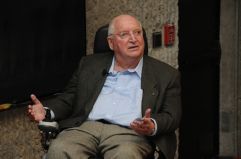 Massimo Scolari delivered the opening address on this Thursday evening, kicking off both the symposium and his exhibition “Representations” at the school’s gallery. Taking the position, clearly and frequently, that the subject is indeed quite alive, the proceedings of the following two days were roughly divided by their position—on Friday were those largely in agreement with Scolari, and on Saturday were those in opposition. The list of speakers was impressive, including Michael Graves and Greg Lynn (prompting several student-teacher exchanges), Sir Peter Cook, Patrick Schumacher, Preston Scott Cohen, Marion Weiss, Juhani Pallasmaa, and Mario Carpo.

With such a slate it was no surprise that seating in Hastings Hall was hard to come by—both it and the overflow rooms were at capacity for the duration of the symposium. From a perch on the balcony of the hall I witnessed the delivery of the multitude of positions on the subject, a fitting and familiar situation given the pluralism here at YSOA. They ranged from the all-encompassing world view of Schumacher and the revelatory Sir Cook, to the mechanical fascinations of Andrew Witt, one of the highlights of the session.  Graves mounted a charming defense of traditional drawing, comparing his sketches to the masterworks of Piranesi, while Pallasmaa talked of the mythical presence of the hand.

A refreshing standout, Lynn eschewed the typical lights-out, head-down slideshow, and offered a set of off-the-cuff remarks, casually leaning over the podium and addressing the discussion from the previous day. He presented the computer as a sketching tool, which allows for the same creative outlet as the hand sketch but with increased efficiency and broader application, taking a both/and approach. Lynn was uniquely positioned for the debate, having been one of the earliest to adopt the new medium yet having proved his skill at highly intricate projection drawing by hand, as shown by his meticulous Stranded Sears Tower project. 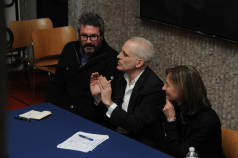 Professor of Architecture, School of Design, University of Pennsylvania (right).

Mario Carpo delivered the concluding address, but the more dramatic ending occurred just prior to his thoughtful lecture, with the final panel discussion. Dean Stern was moved to cut off an energetic Schumacher, who quickly turned his question to the panel into an opportunity to give a new lecture, to the exasperation of the audience. This dramatic and inconclusive moment served as an appropriate counterpoint to a symposium that began with Scolari’s trenchant defense of the medium. No definitive resolution was achieved, and the positions of the speakers were delivered largely as expected. So we return to the anatomy lesson. In the 17 Century, the participation in scientific experiments was as much a social phenomenon as an educational one. Thanks to the strong curatorial efforts of the symposium’s organizers, we were provided a similar platform to do what we love best; that is, to talk about architecture (and be seen doing it).

David Bench is a post-professional student at Yale, having entered the program in 2010 after four years at Richard Meier & Partners.  In the same year, he completed his first independent design-build project, a loft conversion in Brooklyn.  David received his B. Arch. from the University of Texas at Austin in 2006, where he was awarded the Oglesby Traveling Fellowship upon graduation.  David is a registered architect in New York.