The 2011 TED Prize-winner is the artist who goes by the tag, JR. His enormous photographic installations obscure the facades of buildings, overlay streets, and sometimes collage to cover clusters of buildings in one massive broken image. While some shy away from calling his work “street art,” I don’t see any shame in this—especially given […]

The 2011 TED Prize-winner is the artist who goes by the tag, JR. His enormous photographic installations obscure the facades of buildings, overlay streets, and sometimes collage to cover clusters of buildings in one massive broken image.

While some shy away from calling his work “street art,” I don’t see any shame in this—especially given the clear social justice objectives inherent in the imagery. It presents the faces, literally but never as cliché, of invisible and overlooked peoples. In this way, it is street art in the best sense of the term. You walk into the street and there it is and it has something to tell you. It takes buildings and turns them into indexes of shame, embarrassment, nobility, hope—whatever you might associate with the everyday struggles of the displaced lower-classes. 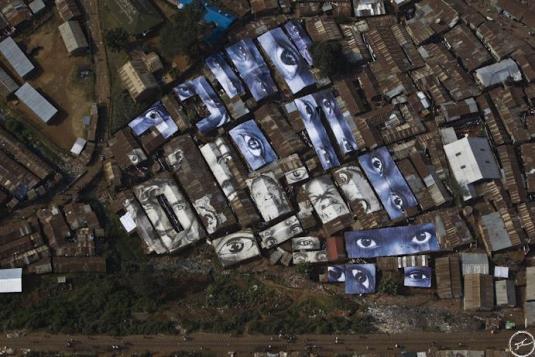 JR’s gigantic monochromatic mega-graphs comfortably fit into the street art scene because they are executed like bombing raids: strategically-planned then deployed with swiftness and precision—enough precision to pull it off anyway. He negotiates just enough local support at the micro-urban level to put it up and go.

The shock of daylight discovery soon obliterates any notion of municipal code transgressions. The images seem at home, like they were meant to be there all along. Moreover, the photographs are of people from the neighborhood.

JR can run with the secretive, hoodie-wearing sub-culture of graffiti artists, taggers, muralists, and stencilists who work under darkness in the world’s cities. In fact, JR’s first book, Carnet de Rue, chronicles the work of famous street artists—as famous as street artists can usually get. JR winning TED might just change this game.

Like all good art, it transcends easy definitions. It is art, plain, but never simple. It is art the way Andy Warhol understood it: public, recognizable, context-breaking. It is also the way Barbara Kruger might see it: in-your-face, assaulting sacrosanct assumptions, and unearthing dirty, not-so-little secrets. 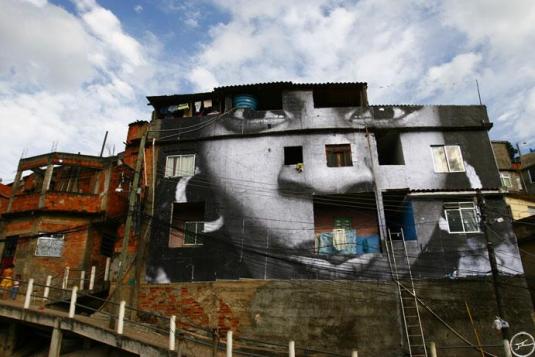 It is immediate and politically urgent because it assaults viewers with the polluted, difficult lives of the downtrodden. It can be ugly, utilizing the beat-up, ramshackle surfaces of slums, favelas, and demolished neighborhoods. But, in the end, they are also photographs and they call us to witness.

One might think the slums alone would be enough to say it all. But as JR’s installations demonstrate, the buildings are just the beginning of the story. It’s what’s inside that counts, but the inside is what we cannot fathom. The First World also cannot fathom the Third World, especially the Third World which lives in the heart of advanced cities. It’s like the prime dilemma in Susan Sontag’s last book, Regarding the Pain of Others: we can bare witness to tragedy, we can view pain, but the experience is ungraspable unless lived. JR’s photographs at least bring us a little closer to the living. 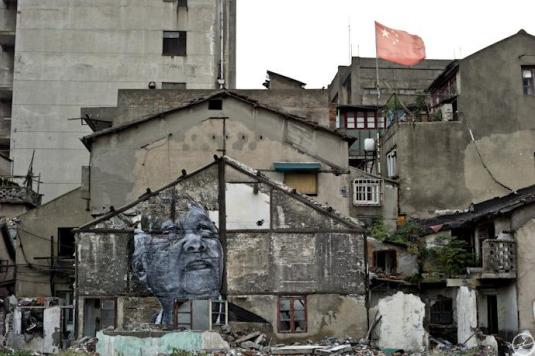 As with past TED Prize winners, he will be able to use his $100,000 award to fulfill a “wish.” I have been told electronically that his wish will take the form of some sort of “mass art movement.” In looking at his work I take this to mean that it will be massive, for the masses, and of the masses. His wish will officially be announced on March 2nd at the 2011 TED Conference. Look for more on this story then. Until that time, keep your eyes open.

Guy Horton writes on architecture for The Huffington Post. He is a frequent contributor toArchitectural Record, The Architect’s Newspaper, and author of  The Indicator, a weekly column on the culture, business and economics of architecture, featured on ArchDaily. He is based in Los Angeles. Follow Guy on Twitter.