A bevy of Soho celebrities turns out to support an alternative vision for a sanitation facility on the Hudson.

John Slattery, the impeccably squinty-eyed actor who plays career scuzz Roger Sterling on AMC’s Mad Men, has no love for a chunky new sanitation facility due to rise over Hudson Square, where he lives with his wife and children, in downtown Manhattan. “It’s incredibly inefficient,” he said squinting in a slick, gently lit art gallery last night at a community rally for an alternative design. (The community being Soho, there was both a popcorn machine and wine.) “It doesn’t take into account the people that live here.”

He went on: “The attention this received has spun the community’s concern for the as-designed project as, ‘We don’t want it in our neighborhood. Not in our backyard.’ That’s not the case at all. All we’re saying is we have a smart, better, cheaper, more responsible, more efficient, more sustainable, and more forward-looking design. It’s better in every way.”

What Slattery and his brethren are championing is, essentially, a greener vision of the neighborhood. Hudson Square is an awkward site off the Hudson River, an industrial ghost town that has only recently fetched up with New York’s (pre-crash) condominium craze. It has since become a wealthy redoubt with scarce few amenities; an ersatz Soho. Residents say it has some of the poorest air quality and among the least public green space in the five boroughs. Now, the city’s gone and made things worse with a plan to erect a monolithic (and vaguely prison-like) 138-foot-tall garbage-truck garage over two acres.

A counterproposal designed by Stas Zakrzewski of the Soho firm z + h architects would tuck the garage under a park dotted with forests, a sculpture garden, an ampitheater, and a seasonal pool, among other features. Hudson Rise, as it’s called, won some coveted awards from the AIA and has plenty of support from the neighborhood, which just happens to be lousy with celebrities. Among its endorsers: Kirsten Dunst, Casey Affleck, Jennifer Connelly and Paul Bettany, Laurie Anderson and Lou Reed, and Slattery and his wife Talia Balsam, who plays his ex-wife on Mad Men. This is Jane Jacobs, star edition. 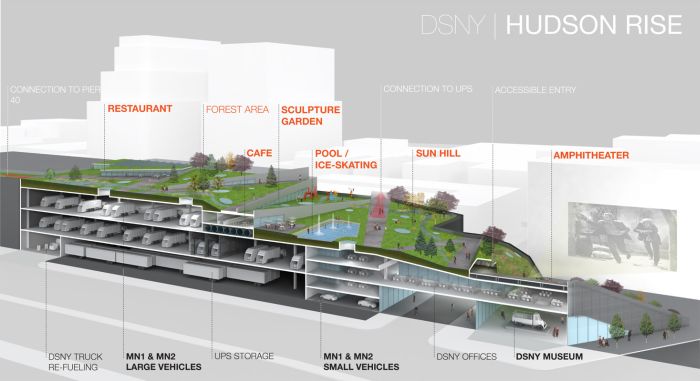 It’s also a game of political football. Bill Thompson, the Democratic candidate for mayor, swept into the gallery last night to deliver a brief speech, promising, “If I were elected mayor, Hudson Rise would happen.” The operative word, of course, is if. Thompson is up against incumbent billionaire Michael Bloomberg, who has out-spent his rival 16 times and who, by all accounts, eats kittens for breakfast. Bloomberg is famously loose on development. The rest of the evening unfolded rather bizarrely, with assorted political and civic figures rising to the podium to praise Thompson, and it wasn’t clear if the event was a rally for Hudson Rise or for the Democratic challenger himself. Any new development in Bloomberg’s New York becomes a proxy–the mayor against the little people–but the timing of this one ensured it would be put to political use.

In this case, the little people happen to be celebrities, and even they can’t force the city to budge. A 2005 court order resulting from a lawsuit filed by another civic group requires the Department of Sanitation to move a fleet of garbage trucks from an existing site on the Hudson–and soon. “We’ve been to hearings,” Slattery said. “[New York City Council Speaker] Christine Quinn is representing the mayor in this situation. I went to the hearing and they sat there and listened to the Department of Sanitation make its case. Then when we got up there to make our case, Christine Quinn left the room and the rest of the people in the room pulled out BlackBerries and were, you know, texting and emailing. It hasn’t gotten the attention it deserves.”

Slattery has a point. New York has made sport of bad planning, from the demolition of Penn Station decades ago to the psychic mess of Atlantic Yards. PlaNYC, Bloomberg’s sweeping effort to green the city, was supposed to change everything. But what’s green on paper doesn’t always translate to the street. The Department of Sanitation facility meets PlaNYC’s imperative because it’s expected to earn LEED certification even though just looking at the thing, it’s obvious there’s nothing particularly green about it. “I think some of the problems in New York City is the architecture that gets approved,” said Slattery. “This is a chance to actually implement something community-related, sustainable, and forward-thinking.”

Said Jason Post, a spokesman for the mayor’s office: “The other alternatives have been studied and we continue to have an open door to the community.” He adds: “There has not been an alternative we’ve seen that is either not dramatically more expensive or otherwise superior to the current plan.” Which is to say, tough luck, folks. Talk about maddening.