Image courtesy Hypercities.com An open source approach is what distinguishes UCLA’s Experiential Technologies Center (ETC) from other media labs, most of which focus on discrete or proprietary products. ETC’s dedication to open source knowledge makes it findings accessible to the general public and scholars. What’s more, many of the projects are collaborations between academics and […]

An open source approach is what distinguishes UCLA’s Experiential Technologies Center (ETC) from other media labs, most of which focus on discrete or proprietary products. ETC’s dedication to open source knowledge makes it findings accessible to the general public and scholars. What’s more, many of the projects are collaborations between academics and public organizations. The goal, as the lab states, is to make its research on “a wide range of phenomenological issues, including movement, sequencing, sonification, and visualization” accessible. The projects, they add, address the “broader cultural, social, economic, and political aspects of civilizations – both ancient and contemporary” in disciplines ranging from archaeology and architecture to foreign languages, education, and to substance abuse treatment.

One such project is HyperCities.

The contemporary spatial configurations of cities and their history throughout the world are collected in an interactive database, including a wide range of information in the geographic, social, and historical fields. In addition, the collaboration with local organizations gives a depth to the project that might otherwise be missing. The result: rather than merely examining one dimension, the HyperCities project allows anyone to research space diachronically with a myriad of historical data. 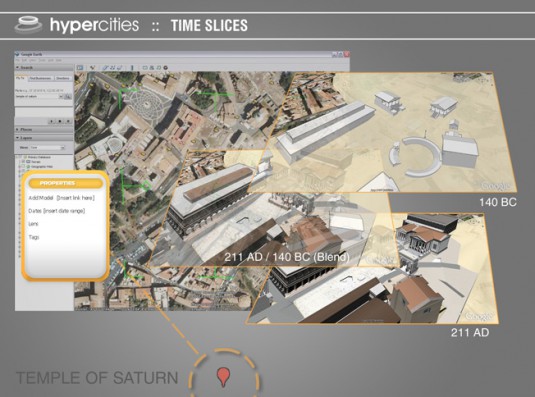 The development of cities is represented through temporal physical changes as well as through their demographics and “media history” including tweets and even political protests. Depending upon the city, additional sources include written narratives and interviews on social and cultural history. The possibilities are endless for both institutional as well as personal use, from investigating a family lineage or a discrete sector of a city diachronically to expanding on archaeological investigations.

This commitment to open source knowledge is echoed in the formerly-named Timeline of Women in Architecture which is now the Dynamic National Archive or DNArchive. As the title implies, it is a searchable archive of women architects of the 20th century. The definition of architect is broadly rendered and inclusive. The information ranges from architects’ personal and educational biographies to their work and influence upon the profession. Anyone can register and add an architect’s name. The advantage, clearly, is the breadth of the input; this research doesn’t rely on a discrete number of university researchers for information.

Another ETC project combines the innovation of computer 3D graphics and VR using architectural modeling combined with substance abuse treatment. The Meth-Apartment project demonstrates the evocative power of environment on the human psyche. Begun by a neuroscience Ph.D. student and with the help of an ETC researcher who specializes in 3D architecture modeling, it creates a treatment model for substance dependence in conjunction with pharmocotherapies. Participants are alternately subjected to “neutral” and “meth” VR environments, and then encouraged to interact with the objects in both “apartments”. Their physiological and self-reported reactions to these visual “cues” are recorded and that data is used “to improve cognitive and behavioral treatments” over traditional “exposure cue methods.” While still in the evaluative phase, initial results have been positive.

These projects highlight the value of media-based research for expanding the reach of media graphics for aesthetic purposes, as well as to increase the depth and accessibility of knowledge in a wide variety of disciplines. And the findings are available to anyone who may be interested.