Lessons on Zoning from Miami

I’ve heard zoning called a lot of things: an invisible hand that shapes the city, a legal framework for protecting property investments, and the primary tool for protecting communities and culture. In the end, it’s really a set of rules that tells us what we can or cannot do when it comes to changing the […]

I’ve heard zoning called a lot of things: an invisible hand that shapes the city, a legal framework for protecting property investments, and the primary tool for protecting communities and culture. In the end, it’s really a set of rules that tells us what we can or cannot do when it comes to changing the physical forms of our cities. The New York City zoning code, the infamously complex set of guidelines that have helped shaped the city for almost a hundred years, needs to change.

Recently the Center for Architecture held a lecture and panel discussion on the topic. Elizabeth Plater-Zyberk of Duany Plater-Zyberk & Company spoke to a room full of architects and planners on Miami21, the city’s revamped set of land use regulations. Plater-Zyberk, one of the founders of the Congress for the New Urbanism, acted as lead consultant for the effort.

According to Plater-Zyberk, Miami’s old code had more than 360 land uses, a result of countless zoning amendments, overlays, and special districts. Her team worked to take the old code, a form of Euclidean zoning, and convert it into a form-based code. A form-based code focuses less on how a building is used, and more on how those buildings are built in relation to each other. 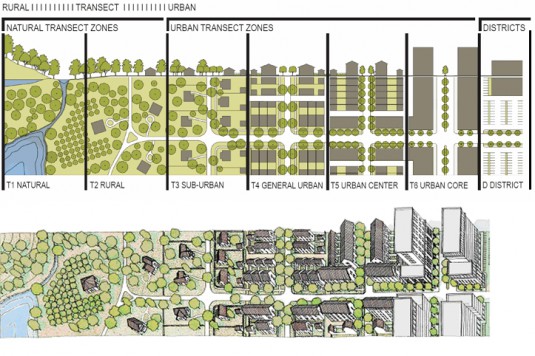 Miami worked for 5 years, through more then 500 meetings, to take their complicated Euclidean code of more then 360 land uses and reduce them to essentially what you see above; transitioning forms of urban densities, a few special districts and pre-determined restrictions on mixed use. Simplifying the zoning code in New York is crucial since “even the experts only pretend to fully understand it,” according to the architect Michael Kwartler, one of the panelists who responded to Plater-Zyberk’s remarks. 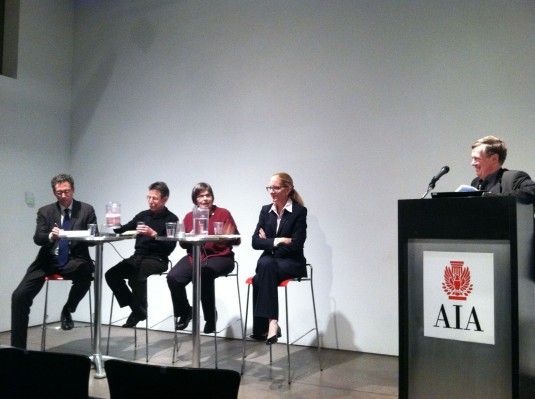 In Miami, the simplified code enabled the creation of Special Area Plans, which are unique zoning arrangments created by residents for their communities. Plater-Zyberk described the process as, ‘Use our new [zoning] rules, but use your own special combinations for your part of the city… Form-based codes are not of one stripe, all are extremely tailored to each location.”

Plater-Zyberk also talked about how Miami focused on the creation of density and more transit options. Miami21 zoned for higher densities in corridors, turning them into the centers of communities; and where these corridors crossed resulted in nodes, centers with the greatest densities and the best places for transit. While the need for greater density and transit are important to improving cities, they are not key issues in New York. However, simplified codes and community based planning are lessons every city can learn from. But will New York learn from places like Miami and join the 21st Century in creating a modern zoning codes, or are we going to continue to only pretend to know what we’re doing?

Ryan Cunningham is a recent graduate of the Pratt Institute Masters of City and Regional Planning program in Brooklyn, has years of research and community planning experience, and is an employee of Metropolis Magazine. @ryanacunningham