The wind has picked up here in the past two weeks. Along the road to Tingo, a small village close by in the highlands the gusts are strong enough that when I lean into them, they support my weight. The wind’s speed is just about double what it was in the recent past. Last month […]

The wind has picked up here in the past two weeks. Along the road to Tingo, a small village close by in the highlands the gusts are strong enough that when I lean into them, they support my weight. The wind’s speed is just about double what it was in the recent past. Last month the average velocity was just under 15 miles per hour. Yesterday it was 30.

I know those numbers because in September a group from the Pittsburgh chapter of Engineers without Borders (EWB) came to Tingo to survey the mountain for a water system they hope to build. While here, they installed a meter to determine whether a turbine, mounted somewhere in the village, could power a water pump.

The Tingo project is one of the oldest and most ambitious that this particular EWB chapter has worked on. It will entail sending water from a source at the base of the mountain, up to a distribution tank at the highest place in the village, near the apex of the mountain where an Incan fortress once stood, ringed in concentric, ascending circles of stone. From there water will flow downwards through pipes into the 26 households that currently have no water for washing, cooking, or irrigation. The project has been long in process for a number of reasons, not the least of which is the difficulty of communicating between Pittsburgh and Tingo; there are neither landlines nor cell phone service in the parish.  The engineers’ visit last month – a long week of day-time surveying and night-time conferences – will likely be the last information-gathering effort before construction begins this coming winter.

That visit was also my introduction to the existing water systems in the parish, projects built in the past five years or so, almost always according to the same basic scheme as the ones we will use in Tingo: collection tanks, a pump, and gravity-fed lines to each house. But despite their relative newness, the systems we saw here – built at significant cost and with the best of intentions – were often broken, if not completely then partially.  With time, they will only get worse.

The same problems undermine much of the infrastructure built in the parish over the past decade. Toilets and wash basins don’t work two years after they’re installed.  Buildings suffer damage and are never repaired.  Pipes leak or are accidentally cut, and they remain broken because there’s no money or knowledge to repair them, or simply because nobody knows who is responsible for fixing them. 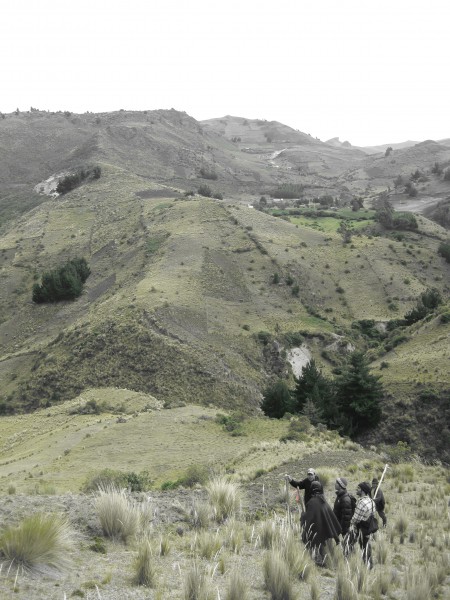 This is exactly what we’re hoping to avoid in Tingo. So as the engineers pore over numbers and tweak plans, as they play with water rates and pressure, electric voltage and material strengths, our challenge – the community’s and mine – is to figure out how to make the new system sustainable after the technicians  leave.  We hope to forestall future problems (the sort that have left ruins of similar engineering projects elsewhere in the area) by planning the system’s every last detail: the rotation of construction work crews, the responsibility for future maintenance of the system, the makeup of its administering bodies, the sum of monthly fees, and every conceivable problem that might present itself, from the time when construction commences to when water begins to be piped into each home.

This is why the community will meet each month before construction commences, and why every week I’ll walk from my home to the community center to discuss developments with the members of the village’s Water Board and its elected leaders.  It´s why they will continue to explain to me in slow, patient Spanish until I finally understand the details of the finances and logistics of the project, what needs to be relayed to the engineers and what needs to be decided immediately.

And it´s why we all felt exhilarated when, last week, each family voted to give $1.50 per month to a maintenance fund, an amount they can barely spare, to support a design that they have not yet seen, not even a drawing.