For most people in Guangaje — perhaps for most people in the Ecuadorian Sierra — the daily routines of domestic life orbit around an outdoor wash basin called a lavanderia: an open cistern for water storage, and two smooth concrete slabs on which clothes are scrubbed, dishes cleaned. In many places in the parish, where […]

For most people in Guangaje — perhaps for most people in the Ecuadorian Sierra — the daily routines of domestic life orbit around an outdoor wash basin called a lavanderia: an open cistern for water storage, and two smooth concrete slabs on which clothes are scrubbed, dishes cleaned. In many places in the parish, where indoor piping is unheard of, the faucet that rises out of the concrete basin is the only source of water for each household. This means that the small tank and slab become the nexus for all the family’s cleaning and cooking — a sort of a low-tech, all-in-one sink, dishwasher, and washing machine. In the large parish town of Centro, however, the majority of households don’t have access to familial lavandarias and use, instead, one of eight public basins, arranged in a curving line that bisects the community and connects, eventually, to a water source just outside the town limits. I don’t know when those basins were built, but by the time I took a tour of the public lavandarias last month, they were in sorry state, many of them with faucets broken or pipes severed, little more than cracked slabs laid on the ground.

In October and November, with a small grant from a nonprofit called Water Charity, the local water board and I began an incremental revamping of Centro’s public lavanderias. It was, necessarily, a partial job. Instead of restoring all eight existing lavandarias, we built four new ones, replacing just the most popular, and therefore the most decrepit, of the existing structures. Actual construction, which was done in community work teams called mingas, progressed quickly: On day one we laid pipes and poured the foundation. On day two we finished the concrete sides and slabs. On day three we connected the faucet and pipes to the main water line. By then the minga had disbanded and solitary maestros, the more skilled builders, continued to refine the basins, alone. A week after we started, the lavanderias stood nearly finished, only the wet concrete still waiting to dry.

Lavanderias are pretty ubiquitous in the Ecuadorian sierra, and typical both in who builds them — un-skilled or semi-skilled workers — and in how they’re built, tending to be assembled from the cheapest materials available. All of this makes our new basins good for a sort of informal case study, hopefully telling us something about the way design tends to be practiced around these parts. They’ve got their obvious problems — the shoddy methods and the inadvertent shortcuts, the inefficiencies in construction. There’s no question that they could be designed better, to use and waste less water, to require less from users in the way of “elbow grease,” as my mother would say.

Moreover, what we built was cheap, small and low-tech, and not particularly pretty.

And yet the more experience I have with these sorts of projects, the more I’ve come to think that those three criteria, in particular, are in fact things to strive for, not to avoid. 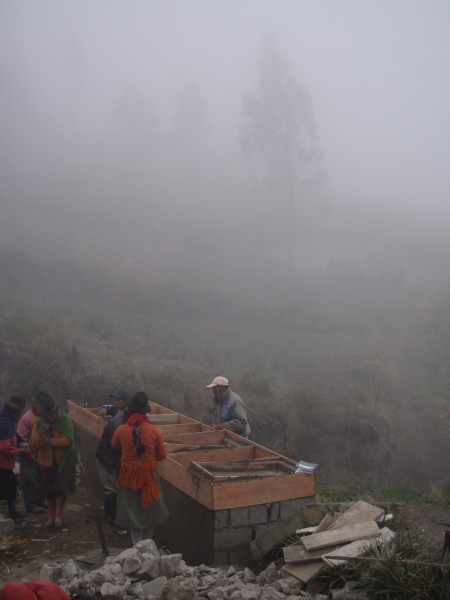 For instance, cheap is good for obvious reasons, since it means less wrangling over financing, with the result that the project is more likely to get off the ground. But it also means that local residents can chip into the cost of the projects, increasing their own involvement, their own investment. Maintenance will be more feasible, confidence will be higher. And for all these reasons, the likelihood that the project will actually be built, increases. Being small-scale and low-tech essentially does the same thing, increasing the likelihood of local participation, and local investment both in initial building and upkeep. These things streamline the process by relying less on outsiders, better utilizing the resources — mostly time and manpower — that exist even in the poorest areas.

I don’t want to say that there’s no place for the large, technically complex projects, the ones that require technicians and engineers and expertise. (After all, as the Centro project progressed I was also working on the pumping and distribution project in nearby Tingo.) Rather, I want to suggest that, first, the small projects matter, that their aggregate effect means something. And that, second, even in the more intricate feats of engineering — the irrigation systems, the pumping systems — the same principles should apply: Little in the way of complication. Few moving parts. Jettison the extraneous.

Ultimately, this may require a bit of rethinking of how we approach design problems in developing places. We often want dramatic change, the sort of change that radically alters the way a community works. We like pretty things, hi-tech solutions. We equate money with quality. We avoid shortcuts. We don’t want better, we want best.

Concrete takes a while to cure — nearly a month if the process is done properly — and by mid-November, I still hadn’t seen the lavanderias in use. Then, last week I spotted two girls washing clothes in one of the newly completed basins, a colorful mass of clothes piled nearby. It’s common for indigenous women’s clothing to be dyed in vivid hues, and these girls had placed their pile of red and purple wool dresses in a heap, perched on the lip of the basin. The bright colors popped from the ash-grey of the concrete, and brand new lavanderia — newly set and finally ready for use — looked ugly and cheap. The girls didn’t seem to mind.