B3 volunteers in Tingo. Photo: Robert Gradoville. By the end of February, 34 high school volunteers from the service group Builders Beyond Borders (B3) had completed one of four distribution loops for Tingo´s nascent water system. Over the course of six days, the students dug nearly 2,000 feet of ditches, then assembled and laid the […]

By the end of February, 34 high school volunteers from the service group Builders Beyond Borders (B3) had completed one of four distribution loops for Tingo´s nascent water system. Over the course of six days, the students dug nearly 2,000 feet of ditches, then assembled and laid the high-pressure PVC piping that will eventually carry water to 30 houses scattered along the hillside. Designed by engineering students from the University of Pittsburgh—whose visit coincided with B3’s in order to direct the first stages of work–the distribution loops run from a concrete storage tank (yet to be built) at the highest point, a hill behind the community center, beside the village president’s house. The tank will be fed by an intake and pump house, 1,000 vertical feet below. An underground pipeline, dug out of sandy mountain soil, will connect the three structures.

Each spring, the students from B3 travel somewhere in Central or South America, where they work on projects that will benefit that year´s host community. Two weeks ago, the first of two groups arrived in Guangaje to help with the early stages of the Tingo water project. The distribution loop that we’re currently working on will connect the holding tank to 28 community tap stands. Normally, it would be built last, after completing the intake and pump and uphill pipeline. In the improvised, on-the-fly nature that seems to characterize the entire project to date, however, we‘ve tackled the distribution lines first, largely due to complications with design and funding.

The four distribution loops are connected to the central tank, gravity fed, and filled with water at all times.  Using a loop system rather than an axial one means that instead of supplying houses through a single line (which, if it fails near the top would cut off all water to the down-pipe), we’re essentially feeding each house via a large circle.This, in turn, means that a break in the pipe along one half of the loop won´t cripple the system; the water can still reverse course and reach the same point from the opposite route. Valves along the pipeline will clean out the system, shut off segments in case of damage, and reduce pressure.

Though the UPitt team has supplied detailed plans and lists of materials,  much of the construction is necessarily makeshift, improvised to accommodate the materials and equipment we have access to. In the U.S. we’d have building parts designed specifically for each purpose. Here we often have to invent what we need, with a sort of MacGyveresque panache. 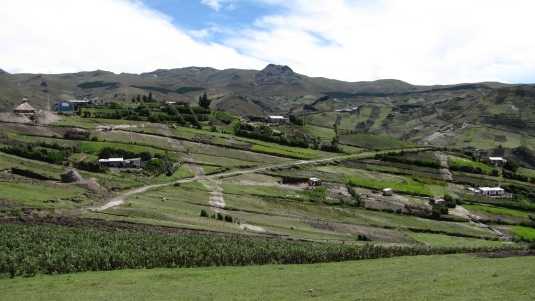 For instance, when an overzealous Ecuadorian accidentally severed a buried water pipe with his hoe (a neighboring village’s water system runs through Tingo, making ditch digging even more complicated), Rob Gradoville, a UPitt engineer, former Peace Corps Volunteer, and head of the Engineers Without Borders project team, found himself face down in the ditch, sawing furiously at a 50mm pipe, water spraying wildly. By the time the pipe was plugged in a jury-rigged assembly of pipes, reducers, and unions, the mud had risen to ankle-level. The scene seemed an apt metaphor for the entire messy process of developing and building the system.

On the last day of the B3’s Tingo trip, we erected an outdoor tap stand and filled the mouth of the loop with water (on the spot where the tank will be built someday). The effort was partly symbolic. The idea was to have water flow from the outdoor house spigot, signifying the official start of construction and allowing a nice photo opportunity. But it also served the practical function of making sure there were no leaks or clogs, and that all the pipes had been joined properly. I understood that there was something staged about the event, that the water which we’d introduced to the system did not come from the source and we’d completed only about a tenth of what we’ll have to finish before the system is truly operable. Happy to have completed the first stage of construction I was, nonetheless, prepared to be unimpressed. 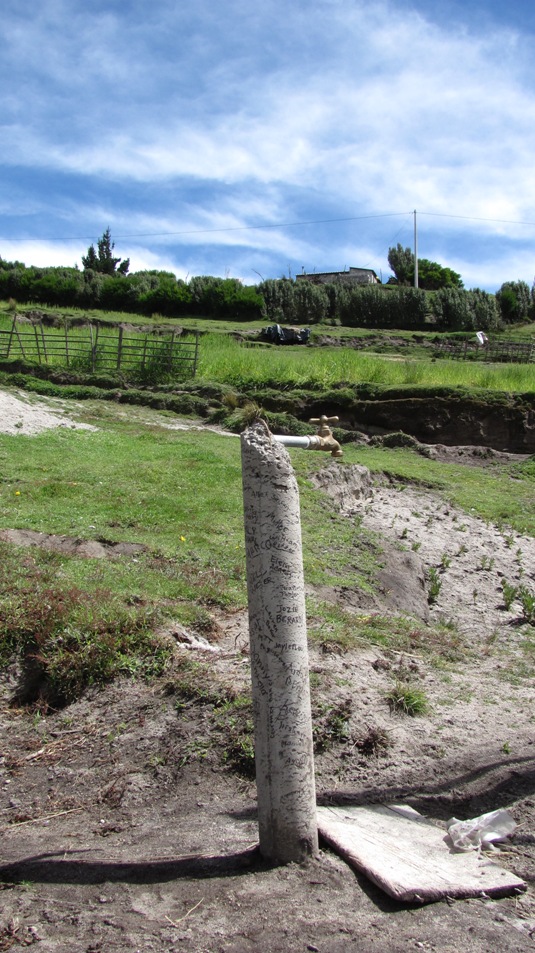 Yet there was something poignant about the simple fact that water did come out when a group of B3-ers joined hands and jointly turned the faucet. All this pomp in celebration of a steady trickle of water from a four dollar spigot! Cheering that would probably seem odd in any other context, but in a place that has never had such a luxury, it was hard not to get excited.

After years of community agitating and months of serious planning, we finally broke ground, and a project that has always felt tenuous, both in financing and construction logistics, seems to be finally picking up momentum.

George Beane returned to New York, his home town, after graduating from college in 2008.  He worked for Metropolis (writing some memorable blogposts for this site) for a year before leaving, last June, for the Ecuadorian sierra