On their last day in Tingo Pucara, a cluster of engineers squatted around the exposed nub of a six-inch PVC pipe. One dangled a flashlight into the opening to illuminate the hollow. The vertical PVC tube joined perpendicularly into the grid of subterranean water pipes that crisscrossed the Andean village four feet below ground. Over […]

On their last day in Tingo Pucara, a cluster of engineers squatted around the exposed nub of a six-inch PVC pipe. One dangled a flashlight into the opening to illuminate the hollow. The vertical PVC tube joined perpendicularly into the grid of subterranean water pipes that crisscrossed the Andean village four feet below ground. Over the past week, we had hooked up a pump and electricity, checked the containment tank, and installed shut-off valves and water meters at each of the 26 homes that were to receive water. But today, several houses showed unnaturally low water pressure, and three houses were receiving no flow at all. Complicating things, the village was celebrating a wedding. Except for one reluctant guide, we were working on our own. Tingo is a small village in Cotopaxi, Ecuador, and the site of an ongoing engineering project from the Pittsburgh chapter of Engineers Without Borders (EWB). The engineers’ visit in February marked the unofficial inauguration of the water system, in construction since 2010, which is when I arrived there as a Peace Corps Volunteer and became the liaison between the village and U.S.-based engineers. Kinks would continue to be worked out over the following months, but in early February 2012, water finally flowed through pipes and from spigots outside of each house. By almost every measure, the Tingo Water Project is a success: it exemplifies the kind of partnership between local government, nonprofits, and local community that aid groups aspire to – its results so consummate, that the project won the prestigious Premier Project 2012 Award from EWB’s national chapter. The Tingo Project is, in short, the type of success story that development groups cite to justify their existence. Six months later, I am back in the U.S. I remember Ecuador with some nostalgia, but wonder if the picture isn’t a little more complicated then I thought. Some things I’m still sure of: Beneficiaries of the water system will see a real improvement in their quality of life, and my role in realizing that fact is something I am enormously proud of. Dogging those certainties, however, are some doubts: The engineers I worked with were smart, selfless, dedicated people who gave up hours and money to work for people they typically never met. But they only ever saw part of the big picture, because the problem of getting water to poor people, treated as an engineering problem, is equally a problem of resource allocation, national policy, and local politics. Treated as a design problem — a question of building things – the Tingo water system received a long and arduous, but ultimately facile, solution. The ground is broken, the ribbon eventually cut, the mission accomplished. Then the cycle – local needs seek outside aid – repeats itself. 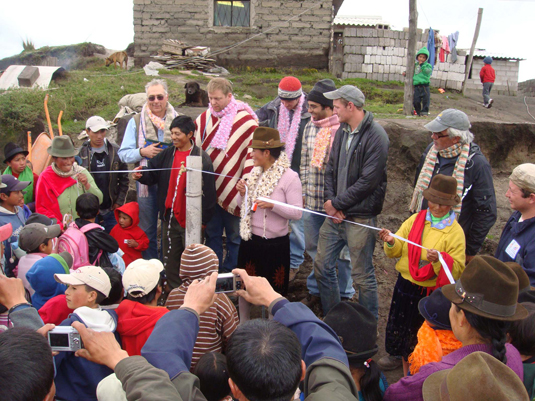 In the end, our massive expenditure of money and time helped a single village, about 120 people. Moreover, in the surrounding canton, village leadership is often split among families. When, as in the case of Tingo, one patriarch decides to relocate his clan on previously unoccupied land, the new settlement petitions regional governments and outside aid agencies for incorporation; and then for new infrastructure. Absent any regional planning, and with local mayors eager to please voting constituents, another water system is demanded. A different aid group steps in to address the need. My hope throughout the project had been that a success in Tingo would encourage future EWB trips to continue working in the area. If things went well, I thought, the engineers could establish a relationship with the place and people. Perhaps begin regular projects that might expand beyond Tingo and into the surrounding villages. That’s still a seductive idea, and yet the long-term implication of that sort of aid cycle now seems increasingly troubling. Back in February, however, our thoughts were occupied with more immediate concerns. The villagers peeled potatoes and gathered firewood for the impending wedding banquet, as engineers worked to fix the water clot somewhere in the network of pipes. When they were done, they joined the celebrations. According to religious tradition, the Tingoans don’t drink alcohol, so instead of beer, large bottles of orange soda were passed in circles, along with communal plastic cups and bowls of boiled potatoes, sheep and guinea pig. The next day, one of the American team members would act as godfather for the young couple. The charm of a place like Tingo Pucara is that there, in its picturesque isolation, it’s easy to forget where you are, and what lies around you. It’s easy to forget what bigger forces shape remote, impenetrable rural life. As I think about the results of our effort, I wonder if we didn’t fall into that trap, if we didn’t fail to look up and beyond the village horizon, and if maybe that wasn’t the real problem from the start.

George Beane wrote about architecture and urbanism for Metropolis before becoming a Peace Corps Volunteer in Ecuador from 2010-2012. He is currently enrolled in MIT’s Masters program in city planning. This blog is the final post in the Letter from Ecuador series.