The architect Guy Zucker inserted an elegant, light-filled penthouse into this 1960s-era apartment building on Tel Aviv’s Rabin Square. Photo: courtesy Z-A Studio It sounds like the beginning of a bad joke, but during a recent 12-hour flight from New York’s JFK airport to Tel Aviv, two Midwestern evangelical tourists on their way to the […]

It sounds like the beginning of a bad joke, but during a recent 12-hour flight from New York’s JFK airport to Tel Aviv, two Midwestern evangelical tourists on their way to the Holy Land could be overheard excitedly swapping notes on top upcoming destinations—Jerusalem, Bethlehem, Masada, the Dead Sea. “Why would you even want to go to Tel Aviv?” asked one, for whom the city was clearly an airport and little else. “I don’t know, the politics?” offered his friend. The unintentional punch line (last time we checked, Jerusalem was still the seat of government in Israel) was made all the more comic for its blithe indifference to the recent buzz over the city’s regeneration. Tel Aviv is the secular antithesis to everything that ancient Jerusalem represents; it’s young, cosmopolitan, progressive, energetic, and gritty. And in the past few years—as numerous magazines have been tripping over themselves to report—it’s seen a rising generation of artists, architects, filmmakers, restaurateurs, fashion designers, and other creative types.

I was headed there for the architecture. Tel Aviv is home to both the largest and densest concentration of Bauhaus-style buildings in the world, and to an impressive array of new projects by emerging and established architects. Specifically, I was in town for Houses from Within, a 48-hour event during which the city opens its doors and allows access to all kinds of buildings, large and small, public and private, historic and contemporary, obscure and celebrated (more than 160 sites in all). This urban steeplechase, now in its third year, is an ideal (if exhausting) means by which to assess the current moment in the city’s rebirth, and to see up close how the often contradictory municipal attitudes toward development, planning, and preservation play out in the built environment.

At the new, modest, and domestically innovative end of the spectrum was Ohad Yehieli’s Narrow House (below; 2009), which the architect built for his family in the Hadar Yosef district of the city north of Ha’Yarkon River. Needing an imaginative solution to the challenge of building on a long (17 meters) but impossibly slender (385 centimeters) lot between existing houses—and dealing with a tight budget and awkward local zoning laws that disallowed windows on the long sides of the house—Yehieli opened up the ends to the light and put all the living and sleeping areas at these two bright antipodal extremes. In the center of what would have been a long, dark, cavernous interior, he sank a deep, skylit lightwell, around which wrapped he a staircase, bathroom, and kitchen—all lit from above with deflected and refracted light. 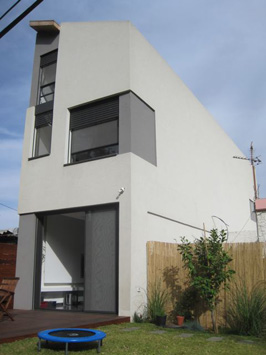 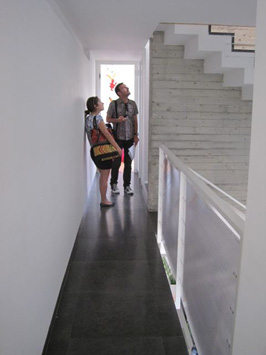 All photos by the author unless otherwise noted

Back in the city center, other projects represented a new generation of architects playing with and reinvigorating Tel Aviv’s omnipresent International Style face. The city’s blocky Bauhaus residences are characterized by their ubiquitous balconies, a necessary feature in the hot and humid Levantine summer. With the advent of AC in the 1960s and ’70s, the majority of these breezy terraces were sealed up, negating the houses’ social face while doing little for the now-darkened interiors.  Young designers have been rethinking how to undo this common blunder. The architect Amir Navon gutted his 1950s modernist apartment on Yericho Street (below) and pushed the living space back out toward the balcony and the leafy street, adding a raised wooden deck area inside with floor-to-ceiling glass doors allowing natural light and fresh air into the large, integrated interior space. 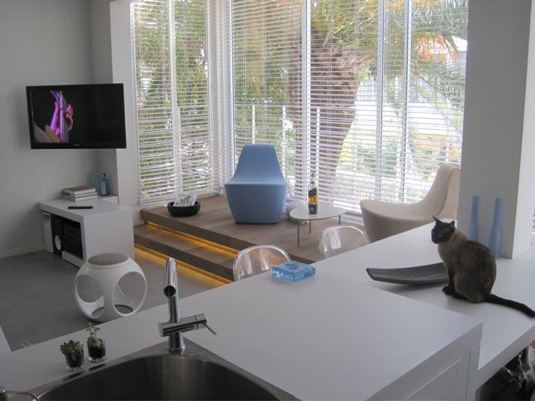 In an even more ambitious and conceptually complex example, the architect Guy Zucker, of Z-A Studio, conceived a radical intervention for the apartment of the fashion-designer Idit Barak. His First Floor Penthouse in effect carves a fissure into the blunt and Brutalist façade of a 1960s-era apartment block facing the bleak expanse of Rabin Square (Tel Aviv’s somewhat forlorn City Hall plaza and its answer to East German–style civic planning), creating a tapering angular wedge of glass running like a crevasse deep into the interior. The effect is a crystalline play of inside and outside, elegantly separating the sleeping area (the private core) from the living and eating area (the social space) while forming a delta-shaped veranda in the space between, opening the apartment up to the square and creating a dialogue between the two distinct units of the home. 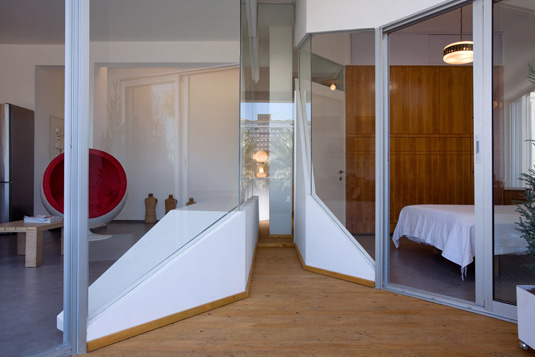 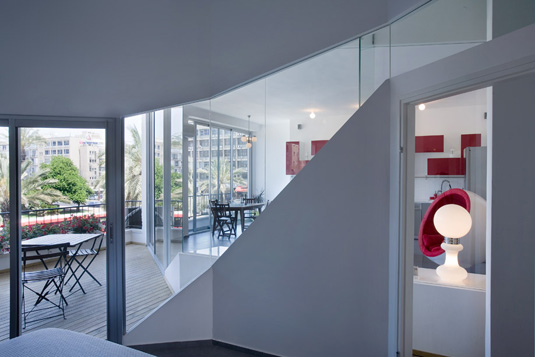 In Tel Aviv, the more modest projects—whether private or public—invariably turn out to be more innovative, thoughtful, and successful than their many ambitious, big-budget counterparts. A case in point is the Mina and Everard Goodman Educational Campus (below; Mayslits Kassif Architects, 2009), an elegant and small-scale complex housing kindergartens, day-care centers, and a neighborhood social-services facility. With a warm and inviting simplicity reminiscent of the best of Oscar Niemeyer, the energy-efficient campus features exterior walls that are actually porous wooden screens, composed of layers of timbered slats that filter light, create shade, and allow cooling breezes to enter the courtyards and play areas within. 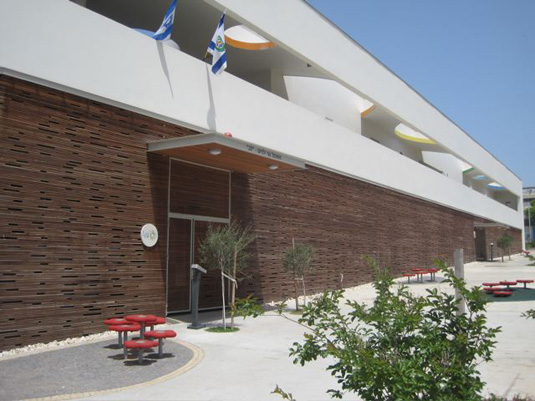 As for those ambitious, big-budget projects: One of the most noble but ultimately disappointing is the Peres House for Peace (Massimiliano Fuksas and Yoav Messer Architects, 2009), the new home of a renowned non-profit organization devoted to furthering the Israeli-Palestinian peace process. Jutting seaward on a slope running down to the beach in the old Arab port of Jaffa, the boxy rectilinear structure was built to house offices, historical archives, and a library, in addition to serving as a conference center and community focal point for the organization’s outreach programs. But rather than being the symbol of reconciliation, cooperation, and cross-conflict dialogue that it deserves to be, the building itself— completed nearly four years late and at more than four times its projected budget—has become a bit of an embarrassment to those who believe in its mission, pointlessly over-designed to resemble an austere think tank, hard to maintain, financially unable to complete the landscaping of the site, and siphoning off the center’s own budgets for vital programming. 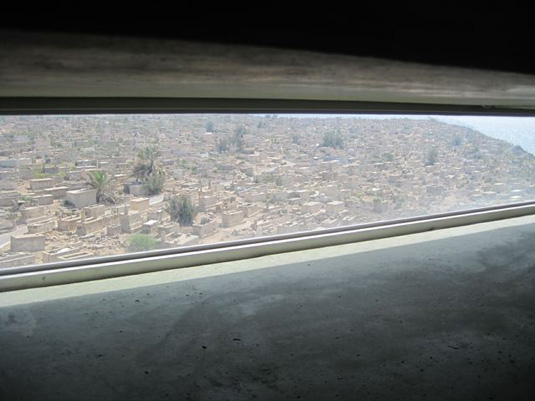 More promising is Ron Arad’s new Design Museum in the Tel Aviv suburb of Holon, which, with its looping, chromatically-scaled ribbons of oxidized Cor-Ten steel banding, makes up for any shortcomings it may have as an exhibition space in simply being a seductively immersive sculptural design object. 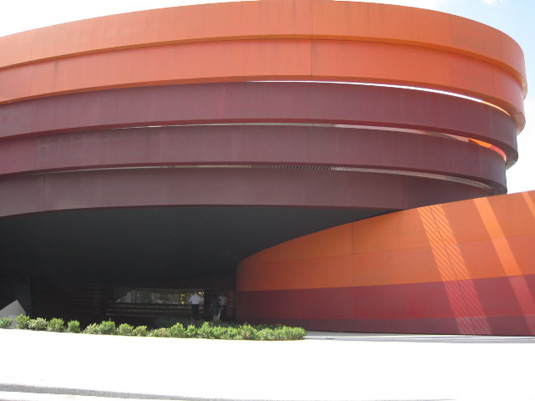 Less clear-cut is the Tel Aviv Museum expansion, designed by Preston Scott Cohen and Amit Nemlich, a massive geometrically and programmatically complex addition to a perennially mismanaged cultural institution. In a scenario familiar to museums worldwide, this institution—with its noteworthy collection of modern and contemporary art housed in a lovable if clunky Brutalist edifice across the street from the Israeli Defense Forces headquarters—has clearly decided that creating a cultural magnet in the form of a formally striking new signature building will magically solve its long-term structural woes. But the addition, still under construction, seems preoccupied less with the art it will house than with its own stunning angular geometries. Its central unifying feature is a now-ubiquitous multistory “void,” the kind of gapping chasm that threatens to become an increasingly de rigueur element of vaguely metaphorical kitsch. 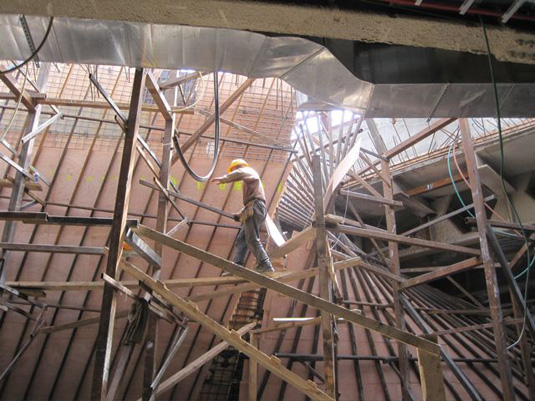 This the city can survive. A pair of skyscrapers rising in Neve Tzedek, an architecturally and culturally rich district that pre-dates the actual founding of the city and acts as the seaside fulcrum between Jaffa and Tel Aviv proper, threatens to do real damage. Naturally, the towers are condos—one 40-story luxury residence is finished, while another is just beginning construction. Neither skyscraper pretends to have any relationship to the existing urban fabric or the village-like character of the area, yet both are breezily trading on its cache, a limited resource they threaten to destroy. Like the razing of Penn Station in New York, or the construction of the Montparnasse Tower in Paris, these projects may prove to be watershed moments for the city, galvanizing tipping points for Tel Aviv’s citizens to confront the powerful real estate interests have been gaming the system and exploiting the weaknesses and many loopholes in the city’s inadequate planning and zoning laws. If Tel Avivians want to continue shaping the destiny of their city of the future, to save it from becoming merely an over-hyped destination or the end product of a stunning lack of regulatory oversight, now may be the time to act. 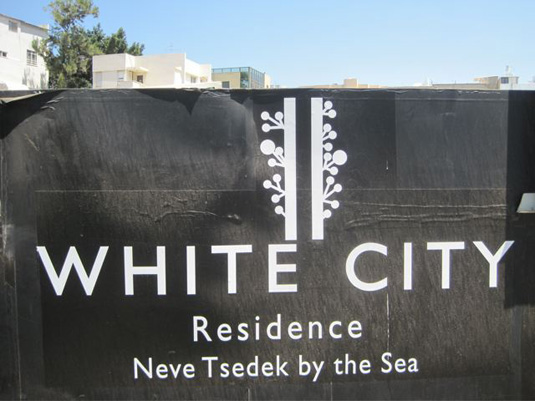