I had read so much, seen so much, and heard so much about Robert Venturi’s Guild House in Philadelphia that when I saw it for the first time it looked like, well, just another ugly building on a wide, dreary stretch of city street bucolically named Spring Garden. And yet, I drive by there often […]

I had read so much, seen so much, and heard so much about Robert Venturi’s Guild House in Philadelphia that when I saw it for the first time it looked like, well, just another ugly building on a wide, dreary stretch of city street bucolically named Spring Garden. And yet, I drive by there often enough that I still have to test what I’m seeing against what I “know.”

Why is this building considered so important?

It only occurred to me in writing this piece that the Guild House (1961) shows some evidence of Frank Furness’ muscular three-dimensionality. I say that in the way you might say to a friend, “Yes, I met your third cousin once. I can see the resemblance.” Not exactly scientific but you know what I mean. I also say that knowing Venturi was responsible for the respectful restoration of the Furness library at the University of Pennsylvania. If you can possibly do a spectacular restoration job and be invisible at the same time then architect Robert Venturi, indeed, pulled it off.

The Guild House no longer sports the TV antennas that were a kind of hood ornament in early photos. Now, with cable and wifi, to put those antennas back you would have to be making an even more blatant statement. Venturi is known for his ironic stance.

From greatbuildings.com:“Originally, the middle of the entrance facade was topped by a golden replica of a TV antenna, a friendly, if embarrassingly literal, symbol of elderly people’s leisure activity and an ironic variation on the decoration of classical pediments. The top floor contains the social room, indicated by a large lunette window.

“…[T]his building has become emblematic of an architectural philosophy that tries both to embrace the conventions of the classical tradition and to be ‘ugly and ordinary.’ ”–Stanislaus von Moos. Venturi, Rauch & Scott Brown: Buildings and Projects. P282

From the outside, the building is much better or more interesting than what’s around it. There are no abutting structures but there’s a skilled architect at work here.

Finally, you swing open the glass and aluminum-framed supermarket front doors to the first floor. There you are struggling with six bags of groceries (i.e., bags filled with architectural jargon) and a gaggle of architectural historians (in your mind) blocking your path to the elevator only to find yourself instantly – deflated.

I tell you I am schocked, schocked to see that an architect would pull such a joke on us. The internal life of a building is its essence. You can disagree with me but isn’t beauty supposed to be more than skin deep? And even if external ugliness is “the point” would internal beauty along with spiritual and spatial sustenance, necessarily, invalidate that? 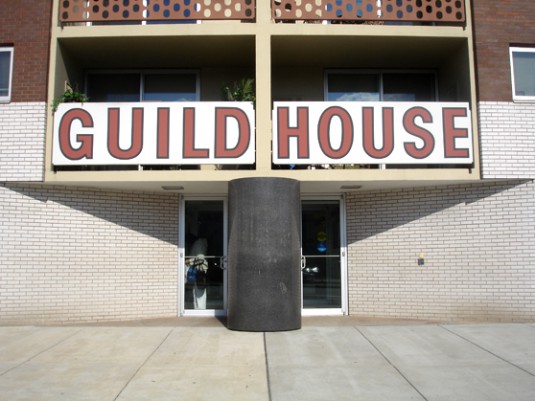 You know, maybe it just wasn’t in the program. The vestibule is small with an even tinier security window. Beyond that, another set of glass and aluminum-framed doors open to a very cramped, sliver of space. Lined with black padded aluminum chairs and backed by a hand-painted ceramic tile mural, it could not, by any stretch, be called a lobby though access to elevators is just around the corner. That’s it. Oh, and since you asked.

I didn’t realize how privileged my tour of the inside of Guild House was some years ago…I was even granted access upstairs to the social room with the “lunette” window. Must have been different management or (understandable) fatigue with the plague of visiting architects and other “experts” but today I was told, sight unseen by the building manager on a cell phone — NO.

So is Guild House some kind of architectural billboard, after all? We may never know. Perhaps Venturi himself knows the secret. He’s been living with Guild for a long time.

Joseph G. Brin is an architect, fine artist and teacher based in Philadelphia, PA. He is writing a graphic novel on Al Capone to be published on Kindle. Brin is also collaborating with Jordan Gil, exhibit designer, on a new project harnessing the power of art and strategic design for a bully-free Philadelphia called “B. Free.” (http://bfreephiladelphia.wordpress.com).