Photo courtesy of Darius Siwek Both SCI-Arc and Caltech came into this year’s Solar Decathlon competition knowing that the public acceptance of CHIP would be challenging. When you are designing something intended to be a home for an individual there is no way to please everyone. Everyone has his or her own personal tastes, lifestyles, […]

Both SCI-Arc and Caltech came into this year’s Solar Decathlon competition knowing that the public acceptance of CHIP would be challenging. When you are designing something intended to be a home for an individual there is no way to please everyone. Everyone has his or her own personal tastes, lifestyles, and prejudices making the judgment of a home completely subjective.

Architecture, however, is not subjective and the more you become involved with the discipline the more apparent this becomes. The challenge with the Solar Decathlon is that we’ve been dealing with two distinct audiences with two distinct objectives. The public judges us on taste while the architectural audience judges us on the rigor of our design approach. Practicing architects always deal with these two audiences and to please both is a rare feat.  Would we be able to do this?

I expected a lot of the initial questions the visitors asked. The first thing everyone wants to know about is the puffy appearance and vinyl skin. “Is it durable?” “Does it leak?” “How does it breathe?” All of these are legitimate questions whose initial skepticism is overturned once we explain how well the system had been thought out and tested.

Of course there are some people who would not be convinced by our arguments, but then ours is a challenging proposition. The puffiness made the home so unfamiliar that the unusual shape is hard to judge against anything conventional and is, surprisingly, not brought up by the public much. Most of the guests visiting CHIP are quiet as I explain the hyper-rational design process, nodding with a slightly worried expression as I speak. But upon entering the house everyone’s expression would lighten up. A lot of people tell me how relieved they are about the openness of the space and the warmness of it, not what they had initially expected from a house that is so (surprise) insulated from the outside world.

I think the change of visitor’s reactions upon entering the interior speaks of our success in reaching both the public and architectural audiences. Once you see the interior organization, the exterior shape suddenly makes sense. The openness and efficiency of that space suddenly justifies the functional need for exterior insulation. And who doesn’t love wood, especially plywood? It’s everywhere and finished with the perfect combination of care and casualness that is uniquely Californian.

The smiles that appear on our visitors’ faces upon entering the house say they get it. And we have accomplished this public appeal by using purely architectural moves. The massing of CHIP is a diagram of the stepped interior organization. By eliminating the unnecessary drywall, we exposed the wood structure that makes the interior feel warm. Maybe pure efficiency and functionality can be both visible and inspire delight.

Also encouraging are the children’s reactions. Upon entering, they often gasp. Those not yet jaded by social norms see in CHIP possibilities instead of limitations and wonder, rather than skepticism. Unprejudiced by building conventions, kids are able to appreciate the playfulness of the architecture. However, as much as I would like to think this was caused by the power of our design, I know that everyone really just liked the Xbox Kinect.

And this leads me to consider something odd. Architecture may be hurting its own advancement, at least as far as the public is concerned. It’s much easier for people to accept something new and strange when it doesn’t compare itself to what already exists. If CHIP weren’t advertised as architecture, I bet it would be easier for the public to grasp. Architecture carries a lot of baggage with it. When you say the word “architecture” to someone not immersed in the discipline, images of pyramids, columns, and cathedrals come to mind. Puffy and squishy masses do not. People expect architecture to be hard, solid, and serious (which is kind of ironic considering that so many people’s critique of modernism is architecture’s coldness). They do not expect it to be soft and playful, which CHIP is.

One couple I talked to couldn’t believe the building was structurally sound because of the outsulation. But for the public the Kinect and iPad app turned CHIP into the kind of design product like some new, smart device from Apple. This leads people to judge CHIP on the basis of its user-friendliness rather than how much it resembles the familiarity of a house. 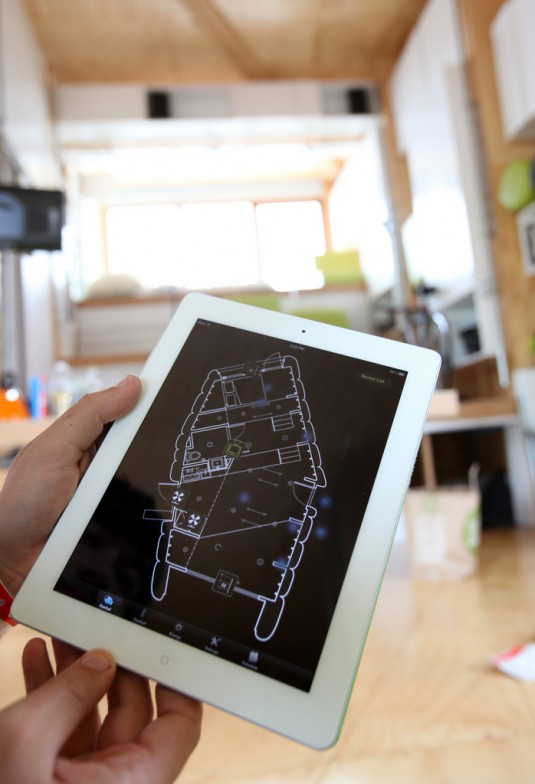 Ironically, then, by making our visitors temporarily forget they are in a piece of architecture, it made the architecture of CHIP more visible. The programmatic organization and expression was appreciated for its own autonomy and material palate of both the interior and exterior. The house is  seen for its functional honesty. This was the real success of our team. We transcended the expectations of all our audiences with architecture whose function is not only visible but also engaging to those who will inhabit it.

Other posts of CHIP, the SCI-Arc/Caltech house at the 2011 Solar Decathlon now in Washington DC:

An Opportunity for Innovation