Renderings for a new Thom Mayne museum, in Texas, show the architect in typical form.

Thom Mayne has said that “architecture with any authenticity represents resistance,” and his buildings, which range from provocative to outright aggressive, tend to prove the point. Mayne’s latest project, the Perot Museum of Nature and Science, slated for a development just north of downtown Dallas, bears the architect’s signature look: schematic designs, released last week, show an imposing metal and glass* cube, set on a plinth, and cut with irregularly placed windows and a large interior atrium.

*Correction: According to Morphosis, the new building’s facade will not be metal but concrete, with a concrete finish that is yet to be determined. 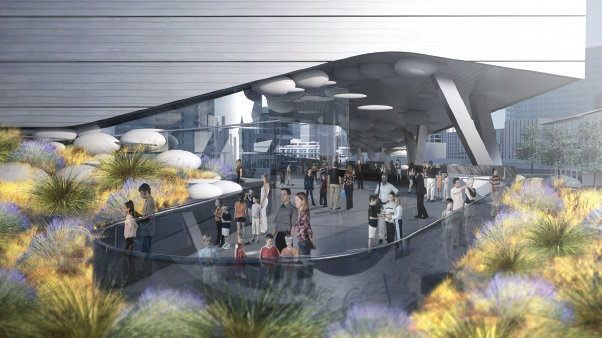 It’s always risky making assessments based solely on designers’ early renderings (reality has a way of tarnishing pristine architectural visions), but it’s safe to say that the Perot Museum bears resemblance to another recently completed Morphosis project: 41 Cooper Square, located in New York’s East Village. That structure, also a distorted cube, also featuring a large central atrium, was praised by critics when it opened earlier this year, and has generally received a warm welcome by New Yorkers. Moreover, the Cooper Union building, as an academic facility that engages with its architectural neighbors and encourages street-level interaction, has been heralded as a civic achievement in a neighborhood that has been the site of particular contentiousness in its recent history.

The Perot Museum, described in the architects’ statement as “a building that opens up, belongs to and activates the city,” seems to have been conceived in a similar spirit as its counterpart back east. But while the two designs show some basic formal similarities, urbanistically the projects share very little; Victory Park, the as-yet-unfinished development housing the Perot Museum, lacks the basic urban fabric that Mayne tapped into so adroitly at 41 Cooper Square. Despite his reputation as an iconoclast, Mayne has demonstrated a delicate touch when it comes to building in urban environments. This last project will test the extent, and effectiveness, of that sensitivity.