Is vertical farming the way of the future? The Social-Environmental Aesthetics Project wants your thoughts.

If there is one design trend that really hit new heights in 2008, it’s the concept of vertical farming (bad pun intended). The idea of growing produce on skyscrapers and structures in city centers found voice in many articles, design competitions, and Web sites. Even Time magazine covered it. Now it’s your turn to chime in.

The SEA (Social-Environmental Aesthetics) Project, a part of the New York-based non-profit cultural center Exit Art, wants to stimulate critical thinking about vertical farming. They reference a quote by Will Allen, winner of a MacArthur Foundation Genius Grant for his urban farming project, Growing Power, as part of their inspiration. Allen’s two-acre urban lot in Milwaukee produces over $500,000 worth of affordable produce, meat, and fish using inexpensive farming technologies such as raised beds, aquaculture, and vermiculture.  “I’d like to see Growing Power transform itself into a five-story vertical building being totally off the grid with renewable energy,” he has said.

“In a country where cities are suffocated by industrial materials, where can green space exist? One answer is: Up,” SEA writes on their Web site.

In an open call for proposals, SEA asks for submissions that examine this rising trend in farming and agriculture. Think it’s the future? Think it’s bunk? Got a design idea? You’ve got until January 19 to respond. Submission details available here. 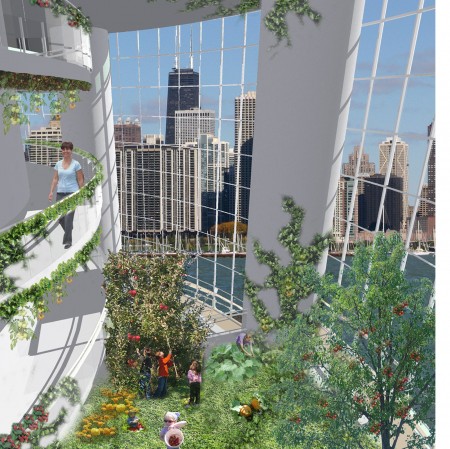