My Daylong Career as a Professional Tennis Photographer

Our senior editor gets a behind-the-scenes tour of Arthur Ashe Stadium.

For all you tennis fans cursing the four-month gap between the U.S. and Australian Opens, here’s a little something to tide you over. (That’s a nice way of glossing over the fact that this post is about an event that ended two weeks ago, no?)

Olympus, which sponsors the U.S. Open, invited a group of journalists (myself included) for a behind-the-scenes tour, during which we would test out the company’s new 12.3-megapixel E-P1 camera, also known as the PEN. When it comes to photography, I’m an enthusiastic amateur. In tennis terms, I’m a hacker. I long ago gave up my 35mm SLR for a digital point-and-shoot that stays on auto. So it was no surprise that most of my journalist peers, who by and large cover gadgets and technology, had far more technical inquiries than I did. But since the PEN aims to bring some of the capabilities of an SLR, such as interchangeable lenses, to a point-and-shoot model, I was arguably the perfect guinea pig. I kept my test camera on auto all day.

Arthur Ashe Stadium, the Goliath of pro-tennis arenas, turned out to be an interesting place to put a camera through its paces. With a seating capacity of some 22,500, it holds more people than any other facility in the sport. But what most people experience—the four levels that separate ticket holders into courtside seats, luxury suites, the loge, and the upper-deck promenade—is only a fraction of the story. “I would say that two-thirds of the stadium is private, back-of-house areas and one-third is public,” says Matt Rossetti, the president of Rossetti Architects, the firm that took on the complex task of designing Ashe, which opened in 1997.

Consider this: the stadium is like a city inhabited by members of the media, players, attendees, and operations folks, all of whom have their own separate neighborhoods with independent resources. The players, for instance, have on-site daycare, dining, fitness equipment, showers, places to hang out with family and friends, and places to nap. Members of the press are not quite so well attended to, but the extent of their provisions might surprise you. “They have private elevators, staircases, and passageways to get to their areas,” Rossetti says. “They are also fed and lounged. They’re there around the clock, so you see them crash in the lounges on makeshift cots. They have locker rooms, showers, and changing areas.”

I got to make like a sports photographer and take shots from on top, underneath, and backstage at the stadium. Our first stop was the media deck atop the broadcast booth, way up above the southern section of the promenade. Here’s what the Unisphere, from the 1964-65 World’s Fair, looks like from up there. 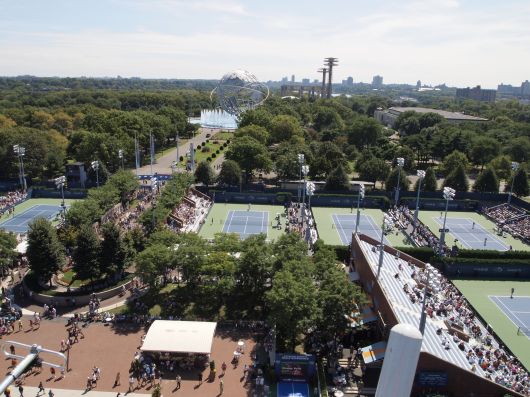 I quickly swapped the Zuiko Digital 14-42mm lens that comes standard with the PEN for a Zuiko Digital ED 7-14mm zoom lens, which allowed me to get a court shot like this from more than 120 feet in the air. 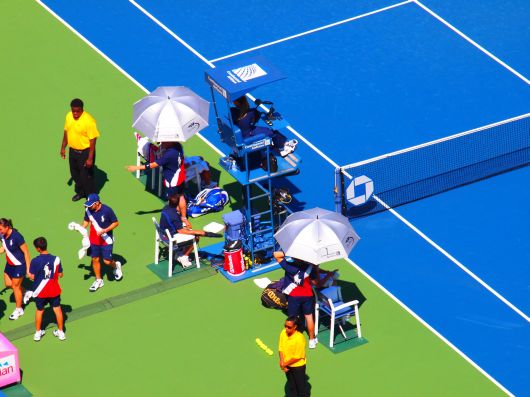 Those hyper-saturated colors are the result of the PEN’s Pop Art filter, one of six in-camera art filters, which also include Soft Focus, Pale & Light Color, Light Tone, Pin Hole, and Grainy Film. I choose Pop Art because I like how the silver umbrellas broke up the composition of primary colors on the court. The only other filter I tested was the black-and-white Grainy Film, also taken from the media deck but looking out over the fountains in the public plaza. 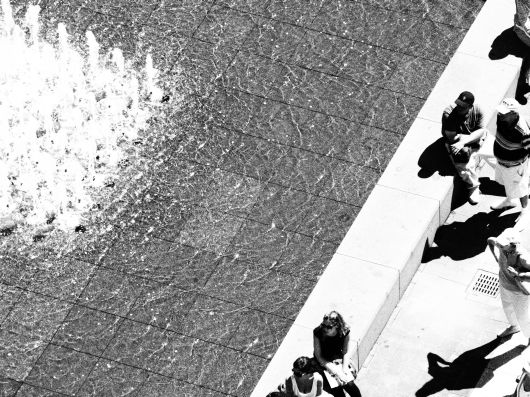 Later, on the ground, an Olympus rep walked me through the double-exposure feature, and I recreated a shot that their team had been having fun with: making the Soul in Flight sculpture look like it was serving inside a spray of water. 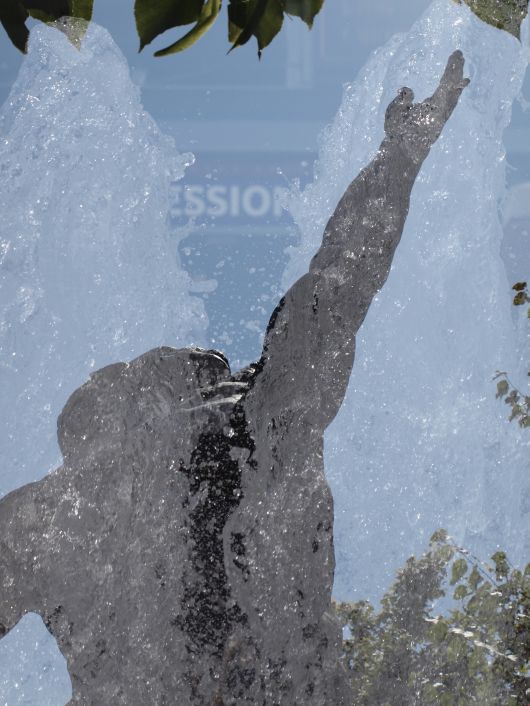 Turns out the broadcast booth is a highly political perch. “They used to be way closer, on a lower level, so it was a big deal to move them,” Rossetti says. “It’s a really nice facility up there. They have everything from food to lounges and work areas. We had to go overboard to make sure that the press wasn’t too pissed off when they were moved way up high. You have media from all over the world—every reasonably sized country has some representation. You want them to say good things about the venue.” No kidding. “Most of the revenue for the event is from broadcasting, then sponsorship, and then tickets,” Rossetti says.

The next stop on the tour—the photographers’ cave behind the baseline—was hands-down my favorite of the day. For fans, this is that dark slot near the surface of the court into which balls sometimes disappear only to pop back out a few seconds later. It’s also the site of those amazing shots that feel like they were taken in the middle of the action. I took two here, and they are probably the ones that will end up in my albums. This was the second-round match during which injured 17-year-old American Melanie Oudin really began her impressive run by defeating the fourth-seeded Elena Dementieva. From this subterranean vantage point I was able to take a nice service shot of Dementieva (right up there with Kim Clijsters as one of my personal favorites). 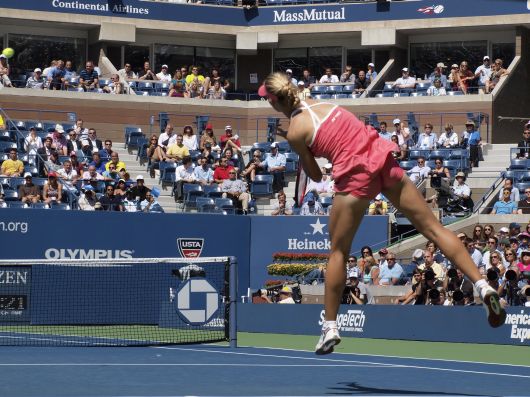 While there was a worrisome pause before the camera would execute the shot, it handled the motion with little fuzziness. I was really happy to have the zoom lens during Oudin’s injury timeout, when it was possible to capture the emotion on the faces of the trainer and tournament official. 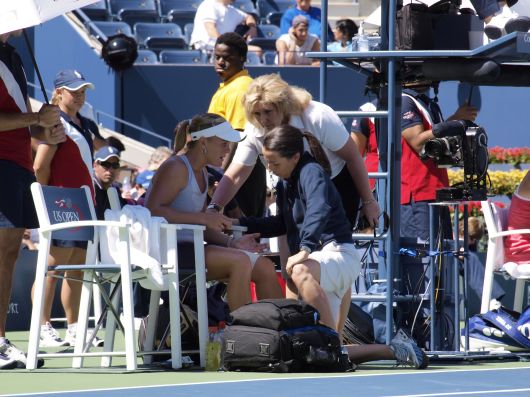 The last official part of the tour involved the player areas, where with the exception of the racquet-stringing room, we were forbidden to take photos. Suffice it to say I stood not 25 feet from Roger Federer and Rafael Nadal simultaneously. 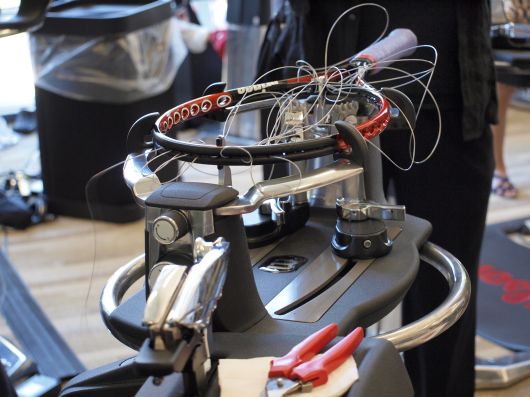 But before I called it quits I wanted to try to capture what it’s like to sit at every level of that colossal facility. Many fans—count me among them—find it hard to procure tickets anywhere outside of the upper deck without committing to multi-date ticket packages. Unfortunately, my ticket didn’t allow me to go courtside, but here’s the view from a luxury suite (I tried to match it to what I saw with the naked eye). 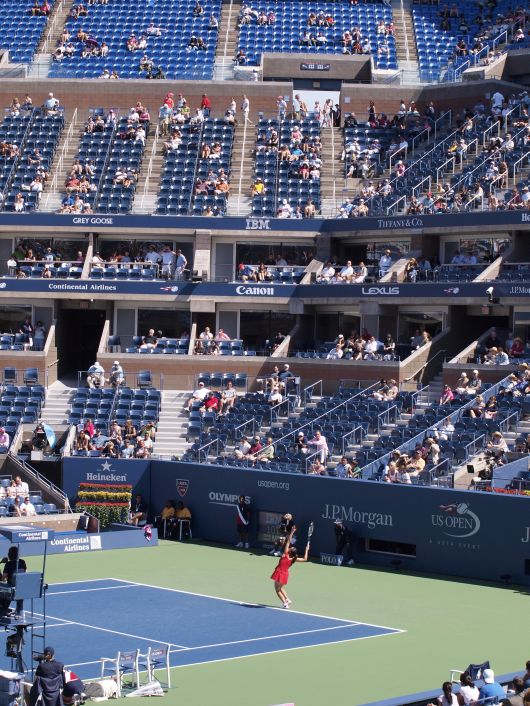 Not bad. You can still read the players’ expressions but only have to go a few steps to grab a beer from the fridge or use the private bathroom. The loge seats (below) definitely put you above the action, but you have fantastic views of the lines and the players don’t yet look like ants. From here, the view is more about the game, about the action, and less about the personal plight of the players. 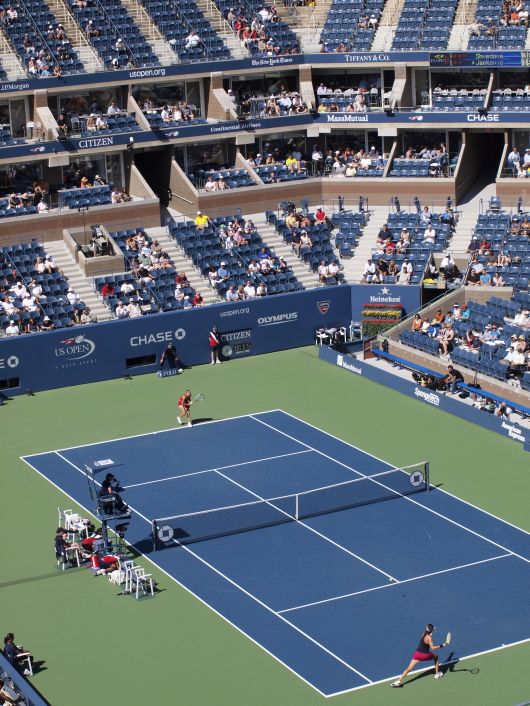 The next shot  was taken from the lowest rows of the upper deck (and there are 26 of them altogether). At this altitude, you are simply there for the ambiance, to be a part of the event, and you better pray that those seated around don’t find a conversation about last night’s television lineup more interesting than the match. 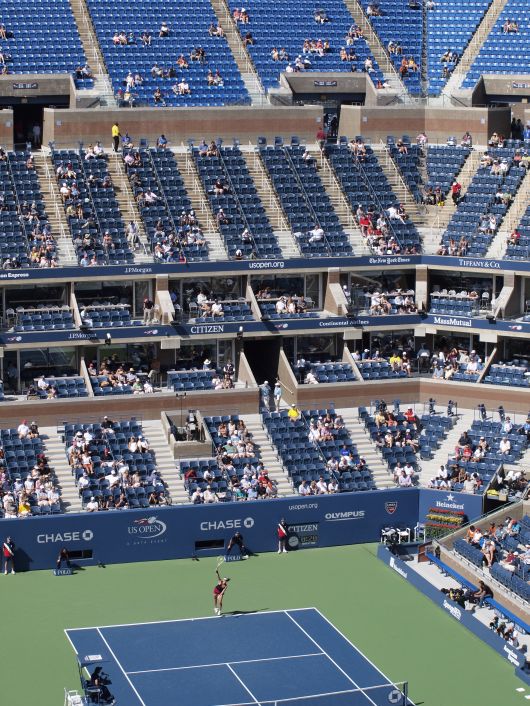 I actually sat courtside once, storming the stadium from the plaza during a late weeknight match when Marat Safin invited the thinning crowd to come down and watch him play Olivier Rochus at close range. Possibly a little too close. I found it hard to keep track of the point while swinging my head from side to side in pursuit of the ball. “With the court seats, you need the ability to have it small enough and close enough to have a certain amount of intensity, to feel the players’ sweat and look them in the eye,” Rossetti says. He also offers up a more mercenary perspective. “The lower bowl is what shows up in most of the shots, so keeping it small, confined, and exclusive drives up demand. It makes people want to be there.” Suddenly, those promenade seats aren’t looking half bad.