New Life in the Old Plaza

Just as Seville was about to construct a new parking facility under one of its historic plazas, archeologists discovered Roman ruins below ground. So instead of digging down, officials in the Spanish city decided to build up. In this way, the ruins would be preserved, while a new structure, hovering above them, would give new […]

Just as Seville was about to construct a new parking facility under one of its historic plazas, archeologists discovered Roman ruins below ground. So instead of digging down, officials in the Spanish city decided to build up. In this way, the ruins would be preserved, while a new structure, hovering above them, would give new life to the plaza. To accomplish this feat, the city launched an international competition; the winner was German architect Juergen Mayer H., a Mies van der Rohe Award recipient. 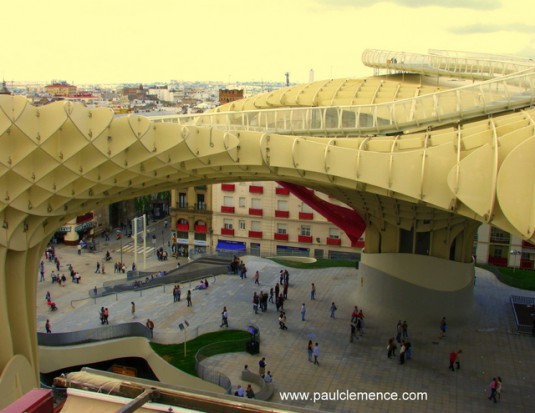 At first sight the structure seems to contrast too much with its surroundings, but the design actually drew on the city’s ancient trees and secular native architecture. From the trees came the inspiration for a canopy of light and shadow. This, combined with the undulations reminiscent of Seville’s cathedral, provided a rich departure point for Mayer’s unique interpretation and use of patterns. The trees also inspired the architect’s choice of building material, Finnish timber treated with polyurethane to make it fire proof and resistant to the elements. The project was built according to strict “green” guidelines, receiving the Holcim Bronze Award for sustainable construction in Europe. 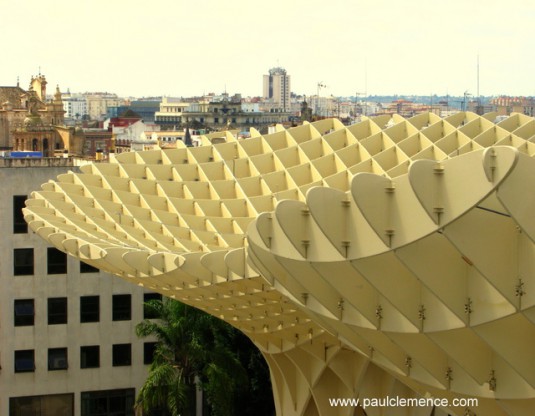 I enter the subterranean Antiquarium de Sevilla, the archeological museum, via an elegant system of glass walkways (designed by architect Felipe Palomino) to examine Roman relics. At ground level, a market hall with fishmongers, farm produce, and restaurants, make for a seamless connection to the city fabric and to its day-to-day life. Up another flight, the elevated plateau expands the plaza into higher ground, making a perfect setting for public events like concerts and film screenings. The patterned parasol structure that covers the whole footprint of the project creates a space at once open yet sheltered (Mies, no doubt, would be proud of this blurring of interior/exterior boundaries). 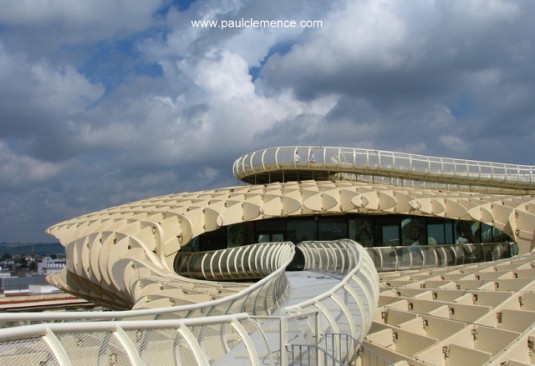 At the very top is an indoor restaurant, and a sinuous walkway swoops over the parasol, offering breathtaking panoramas of the medieval city. This “walk in the clouds” gives visitors an opportunity to interact with the building’s design in a way that is usually not possible in architecture: you can walk into it and above it. And if the enchanting city views are not enough visual stimulation, you can peep through the parasol and glance at the action on the ground below, as if seeing it through a mysterious veil of Flamenco lace. 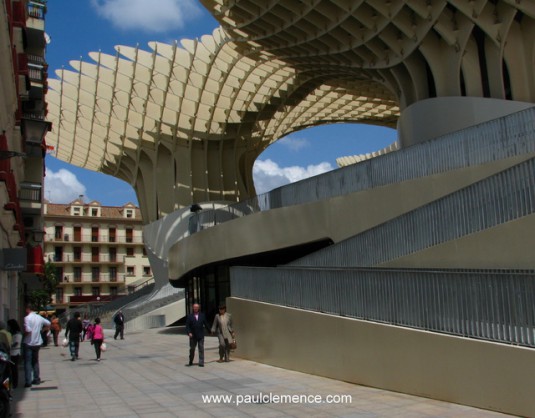 Metropol Parasol gives the plaza the desired cooling shade from the intense summer heat and creates a sense of place. It gives the area a strong identity that connects as well as transcends the city’s history, thrusting it forward and, quite literally, to new heights. Walking into, under, and above the structure, I feel as if I’m walking into a virtual 3-D computer rendering — into a brave new world. Then, as I watch the Seville sun light cast its patterned play of shadows (through Mayer’s distinctive trellices) on the neighboring buildings, I’m reminded of the fourth dimension, TIME. Although the distant past rests just below, I understand this as a very real place of today.

Paul Clemence is an award-winning photographer http://paulclemence.com who specializes in capturing the expressive side of architecture, creating through his unique angles iconic images of contemporary and modern buildings all over the world. He exhibits both in the U.S. and international fine art circuits and is a published author. Over 6,000 people follow his Architecture Photography Facebook page http://www.facebook.com/archi.photo .