Metropolis’s 2009 Next Generation competition received scores of entries, from which this year’s jury chose one winner and eight runners-up to be recognized in the May issue of the magazine. But there were far more than just nine good ideas in the bunch. The judges also selected 12 “notables”—entries that, for various reasons, fell short of the final selection, but that the jurors felt still deserved recognition. To that end, we’re posting one notable Next Generation proposal every Thursday for the next few months. (Click here to check out last’s week selection.) In doing so, we hope to foster discussion that will help the teams refine their ideas, connect with like-minded readers, and perhaps even implement their projects in the real world.

This week: Edward Weysen’s proposal, Black Box, a housing prototype for converting former industrial sites into residential neighborhoods. How would it work?

As Weysen has already demonstrated in a former cotton factory in his native Ghent, Belgium, low-cost prefabricated building systems could be constructed inside abandoned industrial buildings. These compact volumes are easy to heat during the winter, and they can be opened up for an expanded living space during warmer months. 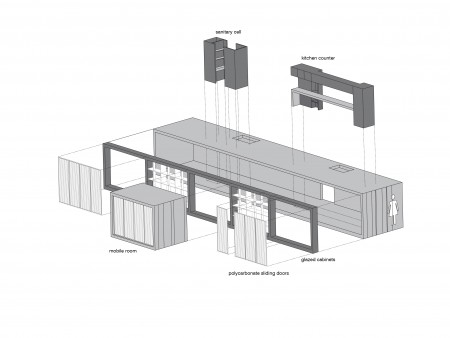 Intrigued? Read more from Weysen’s proposal and view additional images of the Black Box prototype over on our Next Generation site. Have a suggestion for implementing or adapting this idea? Leave your feedback in the comments form below.