Now that Gehry has been “value-engineered” out of Atlantic Yards, our executive editor recants his earlier support for the project. 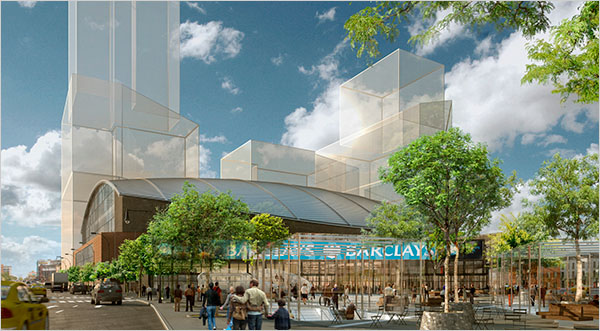 How should we greet the news today that the Frank Gehry–designed arena for the Nets in Brooklyn has officially been scrapped in favor of a cheaper scheme by Ellerbe Becket, the Kansas City, Missouri, firm specializing in convention centers and sports complexes? The world’s most famous architect has essentially been “value-engineered” out of the project. This is hardly shocking. Gehry laid off dozens of architects working on Atlantic Yards at the end of last year and let slip in an interview that he thought the project was dead, only to recant later under pressure from the client, Forest City Ratner. But it is depressing.

Five years ago, not long after the project was first announced, I wrote a carefully hedged appraisal of the arena, supporting basic elements of it with the hope that Ratner & Co. might try to negotiate with the opposition and find a sane middle ground between massive development and knee-jerk NIMBY-ism.

In fairness to the opposition, Forest City never engaged the community in a serious dialogue. They did try to buy off and co-op various neighborhood factions, but the sheer size of the project—and the possibility of scaling it down—was never up for discussion. And, yes, it seems as if the opposition was right about Frank Gehry’s real role here: he was the pixie dust that Ratner & Co. sprinkled over the project to make it more attractive to culturally susceptible types like me, and the late Herbert Muschamp, and good government groups like the Municipal Art Society (who in the Times today began to express their doubts).

I think today’s news should be greeted for what it is: an act of desperation on the part of Forest City Ratner. The clock is ticking. According to Charles Bagli of the Times, Forest City must start the arena by December or they will lose the ability to use tax-exempt bonds. As it stands today, Atlantic Yards is no longer a massive mixed-used development featuring a glitzy arena by Frank Gehry (World’s Most Celebrated Architect), but a stand-alone building that, according to Bagli, “bears a likeness to an ‘airplane hanger.'” And if the arena does move forward, given the current state of commercial and residential real estate, that is all we’re likely to get on that corner for many, many years to come. So, put me down as a “No!” for that one. Here’s hoping Daniel Goldstein can successfully stall into the new year.