Beth Terry shared these nurdles and plastic fragments found on Marin, Calif.’s Kehoe Beach in March 2010. Photo: Becca Harsch. Manuel Maqueda says we’re stuck midway. We understand plastic pollution issues, but we don’t have the solutions. The voice of the Earth is not being heard, Maqueda, co-founder of Plastic Pollution Coalition, says. He was […]

Manuel Maqueda says we’re stuck midway. We understand plastic pollution issues, but we don’t have the solutions. The voice of the Earth is not being heard, Maqueda, co-founder of Plastic Pollution Coalition, says. He was driven to seek plastic pollution justice after a conversation with oceanographer Captain Charles Moore, who is also the founder of the Algita Marine Research Foundation. Moore shared with him what appeared to be a bag of sand which, Maqueda realized, was a bag of minute pieces of plastic. Moore told Maqueda, “that’s the beaches of the future…. It’s the global warming 30 years ago coming to us now.”

Maqueda wanted to take action, to solve environmental issues that were being ignored. After research and collaboration with Google Earth, he gathered a group of individuals with a shared interest and passion for plastic pollution justice to meet at the Google Headquarters. Together they addressed “what this problem is, what the solutions are, and what the solutions are not.” (See the infographic below to see where the problems are.) From this meeting, the Plastic Pollution Coalition emerged. Maqueda and Plastic Pollution Coalition quickly became the voices of the Earth that had been relatively silent in the fight for plastic pollution justice. 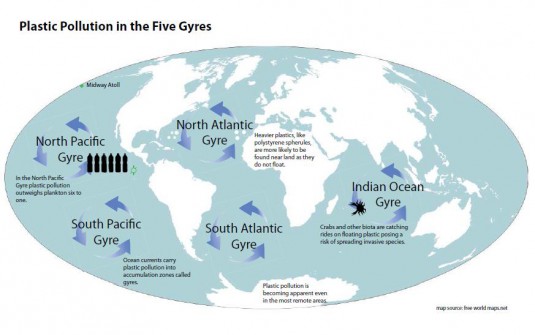 The organization’s initial work was to debunk myths generated by media. People used the term “marine debris” to describe plastic pollution in the oceans. Debris, however, is natural and something we can simply clean. Pollution is not debris. We cannot clean up pollution like we can debris. Many thought plastic pollution in our oceans could be cleaned up. “They were dreaming of venturing out into seas with these contraptions that would clean up the oceans and they would come back riding their boats and be heroes,” Maqueda says.

It’s not that simple. The planet cannot digest plastic.

So, Maqueda decided to embark upon a new adventure. He became friends and collaborators with photographer Chris Jordan, and they led a series of journeys to Midway Atoll, one of the world’s most remote islands in the north Pacific Ocean. The island is almost entirely covered with plastic pollution. “How it gets there is very shocking,” Maqueda says. The plastic pollution arrives via millions of albatrosses that feed in the open Pacific Ocean. The albatrosses think they are eating, but they are filling their stomachs with bottle caps, cigarette lighters, and other plastic particles. “It’s a really grotesque phenomenon,” Maqueda say. The birds then fly to Midway, which is where millions of them nest. They feed baby chicks from their plastic-filled stomachs before leaving the island. It was these albatross chicks, filled with plastic, that the Midway team discovered. 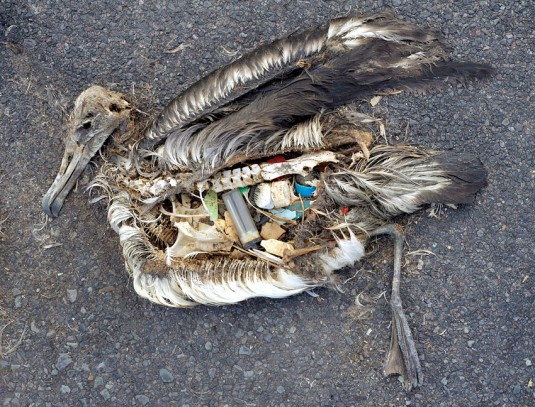 Maqueda and the Midway team travel to the island to act as our witnesses. We now have all the information to understand the fundamentals of sustainability issues, so the question is What’s the next step? That’s where we’re stuck as a society. “We’re kind of stuck midway between a future that we hope is going to be sustainable, that has to be sustainable, and this reality of who we are right now,” Maqueda says. The bellies of the seabirds are a self-portrait of ourselves, he says. It’s a metaphor.

The Midway project has inspired many people, like plastic-free blogger Beth Terry. A daytime accountant and full-time activist, Terry never set out to build a community around plastic-free living. But four years ago, she saw an image of a dead albatross chick from the Midway Journey project and it changed her life. Knowing that the chick had died from a belly full of plastic, she decided she had to stop doing harm to this creature she had never seen and only just realized existed. Like the Earth called to Maqueda, the albatross called to Terry. Thus began her plastic-free life. 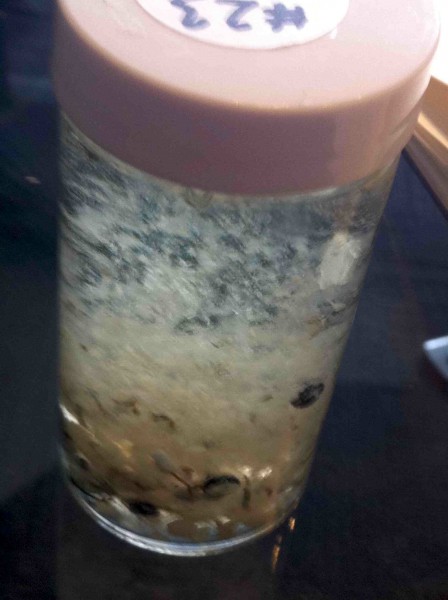 At first Terry blogged to keep herself accountable to a plastic-free lifestyle. The more she learned about plastic, the more she wanted the whole blogosphere to know what she had discovered. She explained how plastic pollution that ends up in our oceans stays there forever, never breaking down completely. She explained how the plastics absorb toxins from sea pollution, only to be eaten by the fish we eat. She found plastic not only affecting the health of humans of all ages and economic means, but that of our oceans, and the creatures of this world.

Ocean pollution is just the beginning of Terry’s concerns about plastic and water. “The point in water justice is [that] people shouldn’t have to pay vast amounts of money to get clean water,” Terry says. Often the communities where companies mine for water have no benefit from water extraction. If there is a drought, the companies are not required to stop extraction. In the case of bottled water, people think they are getting clean water. But it’s hardly regulated. “Companies are not required to disclose the chemicals in plastic packaging. Is it safe? We don’t know,” Terry says.

When Terry discovered she could not recycle her Brita water filter, despite the fact that Europeans could, she approached Clorox to ask why. Clorox said that Americans did not care. But with seven months, 600 filters, and 16,000 people, Terry showed Clorox that Americans do care. Now you can recycle your Brita water filters at Whole Foods Market. This happened because of the Internet community that organically formed around Terry giving voice to the distant albatross.

“We have the power to change the menu that’s been offered to us. We have the power to change the world,” Terry states in a TEDx talk. Encouragingly, she lists eight reasons for personal change ranging from refraining from doing harm, to protecting personal health and supporting ethical businesses. Her reasons include examining our values, asking for what we want, and setting an example for others.

If you think you can’t be part of the fight for change, you’re wrong. We can start on our own. “Allowing people to step back and look at these things, and challenge their own conventions and their own beliefs, has been a very powerful experience for a lot of people,” Maqueda says. We can create communities, like Maqueda and Terry, that work toward change. Together, we can reach beyond midway.

Hear more about reaching beyond Midway in our interview clips with Manuel Maqueda:

Becca Harsch and Stephanie Stone, students in Simran Sethi’s journalism class at the University of Kansas are learning to communicate complex issues via social networking. This is part of a series of posts from a class exploring the intersection of social media and social justice and using water and design as its primary lenses of inquiry.