David Byrne transforms a warehouse into a musical instrument.

Composing music for the particular acoustics of a building is nothing new. The sixteenth century, for example, saw the Italian organist Andrea Gabrieli earn great fame for scores written specifically for Venice’s Cathedral of St. Mark. And Michael wrote on this blog site several weeks ago about architects designing for optimum sound. Creating music that incorporates the infrastructure of the building itself, though, is another story.

Former Talking Heads frontman David Byrne is putting the finishing touches on his installation Playing the Building, which opens later this month at the Battery Maritime Building in Manhattan. Byrne retrofitted an antique organ to “play” the 9,000-square-foot space. The instrument controls a series of devices attached to the structural features of the second-floor gallery, including metal beams, plumbing, electrical conduits, and heating and water pipes. Visitors will be invited to sit and try out the organ, creating their own mini-masterpieces.

Byrne has always had a fascination with the themes of architecture and urban landscapes. Early albums in the Talking Heads discography include the 1978 release More Songs About Buildings and Food. Byrne’s lyrics often present men on the edge of culture reacting to their built environment. In “Don’t Worry About the Government,” a man waxes poetic about a building he hopes to call home:

Then there’s “(Nothing But) Flowers,” which imagines the urban world in ruins and reclaimed by nature: “This was a discount store/Now it’s turned into a cornfield.”

There’s something poetic about the buildings and ruins stepping out of Byrne’s songs after so many years to become the music itself. Reclaiming a historic building as an instrument was an idea he originally toyed with in 2005 for a commission in Färgfabriken, Stockholm. The music created at that site installation is available by visiting his Web site and scrolling down to the archived podcasts. You can also read an interview with Byrne about the particulars of the installation by clicking here.

Playing the Building, coordinated by the arts group Creative Time, runs May 31–August 10. 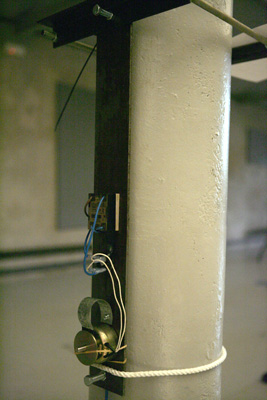 A solenoid – a coil of wire carrying a current – is used here to vibrate a column.