Preparing for their First Milan Fair

Bradley Bowers It seemed like the millionth time that something decided to go awry with one of our pieces. This time it was the fiberglass laminate—it was delaminating. The previous layers had gone onto the mold of our fiberglass lounge, which we had named Shell, without a single hiccup, and we had assumed that the […]

It seemed like the millionth time that something decided to go awry with one of our pieces. This time it was the fiberglass laminate—it was delaminating. The previous layers had gone onto the mold of our fiberglass lounge, which we had named Shell, without a single hiccup, and we had assumed that the final layers would go on just as smoothly. But being new to the vacuum-form laminating process, we weren’t entirely sure what was wrong.  Was there a leak in the bag? Did we apply enough resin to the sheets of glass?

We really needed the process to work, because we had only two more weeks before our entire collection of furniture and accessories would be crated and shipped to Italy. Shell, so named because of the way the piece cradles its occupant, would be the piece de resistance for our debut at Milan’s Salone Satellite, the premier contemporary design forum for young talent.

The Salone was only four weeks away.  After six straight weeks of 20-hour days, the journey was beginning to take its toll. It was all because of Alejandro . This all started because of him. 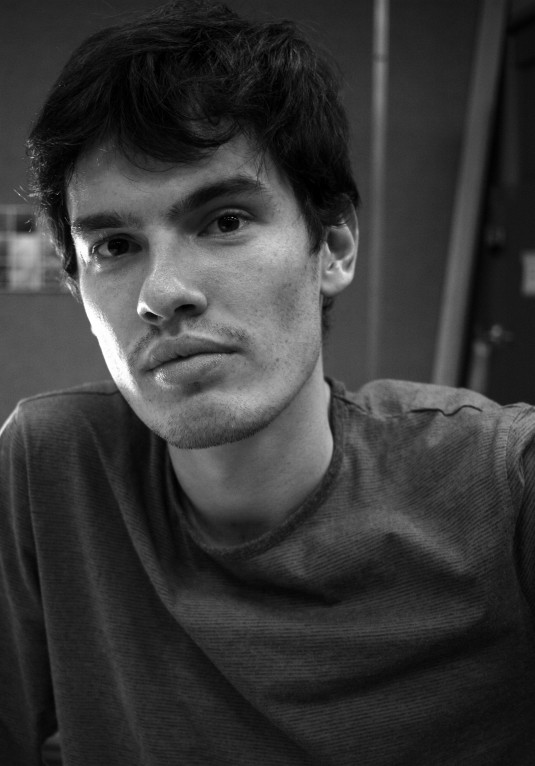 Back in January when he sent me this cryptic message,  I thought he  wanted to catch up. We hadn’t seen each other since November. So, when we finally met over dinner, I launched into small talk about my graduate furniture thesis, and fast-approaching deadlines for graduation. He just nodded waiting for me to finish then he began this way:

“So, there‘s an opportunity for us to show work together in Milan at this year’s Salone Satellite,” he said. “If you’re interested…” I think he kept talking, but I stopped listening and started dreaming about a Milan filled with stylish gents, fantastic food, amazing design, Vespas,  bocci , and did I mention amazing food?

“Well, are you?” he asked with a bit more urgency.

He shifted in his chair before the words, “about eight weeks,” slipped through his lips. Typical Alejandro! Reel you in with some grand irrefutable scheme, then he slips the hook right by you.

“I’m in,” I said. I knew his work ethic was as strong as mine, and that there is never a good reason to pass up a challenge that might lead to Milan.

It turns out that naiveté, ambition, and whimsy are staunch allies for facing a formidable challenge.  Alejandro and I decided that over the next eight weeks we would:

Did I mention we were naive?

We envisioned that our studio, PLZ DNT TCH, would embody an atypical design  language: interactive and engaging, a whirling blend of cultures and traditions; we would honor the blending of the globe with our designs, and a step away from the tired, repeated patterns that had plagued the design world over the past decade.  For the Salone, Alejandro and I started with the premise that, while our pieces would look and feel foreign, they would also capture something familiar, something that begged for inquiry and reconnection.

Not every day was filled with excitement and joy.  Grand design ideas didn’t spew from our minds like water from the Castello Fountain.  In fact, countless ideas stoked the burning fires of our trashcans; others we didn’t dare mention. We were tough on each other.   We were equally judgmental about our material use. Standard materials couldn’t be used in standard ways—this was Milan after all, and anything less than its best might as well be on display at a county fair.

At the end of our deliberation, with only five weeks to go, we emerged with six solid concepts including  a dining table, a hybrid lounge-bed piece (the aforementioned Shell), lighting, tableware, and vases.

Alejandro took the lead on lighting.  His goal was to arrest the viewer and toy with his  curiosity  and awaken his senses. With the first lighting piece Gira—from the Spanish word girar, to spin—two aluminum rods dance in circles tethered to each other by the delicate cables they hung from. Gira’s whirling tango would cause shadows and light to play along the surfaces it illuminated. Ligna, Alejandro’s second lighting piece would, because of the precise weights of all its components, balance gracefully on one leg, like a ballerina in perfect stasis.

After developing lighting, our curiosity would take us into the world of dining. Through Li, our version of a dining table, we would challenge and question everything from how to sit while dining, to what it means to dine with others. Armed with a torch, I would char Li’s surface creating a simple yet dramatic way to alter how one would interact with the table.

But no table is complete without a vessel upon it. So I designed Mona, a vessel so ambiguous that  it erases all our past eating experiences. My goal was to conceive Mona through bold subtlety. It lifts the eating surface away from the tabletop, elevating food to a height it seldom experiences; Mona’s surface is a concavity so subtle that it seems flat and incapable of holding liquids.

Since our earlier pieces really challenged the concept of the object, Alejandro and I decided that the final two pieces would challenge materiality. We would make fiberglass and paper emotional and warm. I would reinterpret the flower vase as well as its symbolism.  My goal was to talk about the impermanence of objects. Each vase is made by wet-forming cotton paper and letting it dry into shape.

The excitement with the vases—which I would later name OM—was that once wet, the paper would develop material limits and what started as a directed process would quickly become a flowing dialogue. I would ask the paper to push, pull, bend, fold, and crease.  I would suggest and it would respond. In this way, each vase that Alejandro and I made, we made more than 40, would be the direct result of its own unique dialogue with the designer. OM evolved into itself, its design was the process of arrival. Out of the 40 we created we selected the 3 best to make their debut at the Salone.

Shell would challenge the emotional limits of fiberglass by attempting to make sheets of glass—a material used to make glossy reptilian surfaces, into warm inviting structures. Getting the material to cooperate was the biggest headache and challenge. We brainstormed and we prototyped and devised what should have been a perfect process… and then it delaminated. So we started again, this time wiser and desperate—a winning combination when trying to move mountains.

Finally, it worked. We’d succeeded in creating an object in fiberglass that wasn’t cold, and that invited interaction. Though Shell is a simple form, it is a considered form. Our goal was to create a vessel for meditative relaxation, not sleep, so the walls of Shell hold but do not envelope the occupant.

With the designs built and ready to ship, we heaved a sigh of relief, but before the breath could leave our lungs, we were on the set of the first of many photo-shoots. The process of documenting each piece was a cake-walk, compared to designing and building the collection—or so we thought. It was two days after everything was bubble-wrapped and waiting to be picked up for shipping, when I received a call from Alejandro saying we needed one more shot of the Shell. It’s always the Shell.

But now I look back, as the crates are loaded on the truck, and I know that it was all worth it. It was by no means easy, and we couldn’t have made it without help from our amazing team of friends, mentors, and colleagues. But now everything is done; there are no more fires to extinguish or deadlines to meet. All that remains is for us to take our place among our fellow Designers—with a capital “D”.

Bradley Bowers is a Designer who likes to say, “I am glad that the world offers itself with no bias and with open arms. Every object is a souvenir of some journey, some bygone experience. Life is nothing but journeys; the fantastic thing about my profession is that it gives me the chance to journey with every person that uses one of my objects, systems or philosophies. My work is simple. I am interested in allowing materials and theories to speak. I am intrigued by the power and the knowledge that objects and artifacts possess. Design is about opening eyes, and sometimes the eyes you open are your own…I hold a BFA in industrial design and a Masters in Furniture Design. Design is the lens through which I see, and interpret the world. Come take a look.”

Alejandro Figueredo was born in Caracas Venezuela. He started his design career at the Polytechnic University of Puerto Rico, studying architecture; he went on to continue his studies in industrial design at the Savannah College of Art and Design. Through design Alejandro aims to help people rediscover their environment, by creating new experiences. He believes that inspiration can be found anywhere, from gastronomy to physics.