1938 Alfa Romeo 2900B MM Anyone who mentions Carravagio, Bernini, and the Ford Motor Company in the same sentence is someone you just have to meet. Dr. Fred Simeone is a retired, world-renowned Philadelphia neurosurgeon who has amassed a car collection in, yes, a world-renowned car museum in Philadelphia. Yet most Philadelphians don’t even know […]

Anyone who mentions Carravagio, Bernini, and the Ford Motor Company in the same sentence is someone you just have to meet. Dr. Fred Simeone is a retired, world-renowned Philadelphia neurosurgeon who has amassed a car collection in, yes, a world-renowned car museum in Philadelphia. Yet most Philadelphians don’t even know of its existence.  “Philadelphia is not a car town,” says museum communications director, Harry Hurst, of this best kept secret in the city.

To appreciate the museum’s importance on the world stage of car collectors, there was that couple from South Africa who flew to Philadelphia, visited the car museum and then flew home. This kind of story is not unusual for the Simeone Foundation’s museum.

Dr. Simeone is, indeed, still basking in the glow of international recognition. And yet the Foundation, as a 501C3 non-profit, is hampered by lack of funds as are many smaller scaled museums now struggling in the country. He is eager to get the word out and share his museum with the community at large.

The underlying premise for this singular, lifetime collection of racing cars (winners only) from 1910 through 1975 is that competition drove progress and rapid technological change. Dr. Simeone, from the viewpoint of a physician, draws parallels to an evolutionary, survival of the fittest phenomenon that made for better, faster cars. Simeone’s detailed book on the subject, “The Spirit of Competition,” features a foreword by car racing legend Mario Andretti and photographs by Michael Furman, foremost racing car photographer in the country.

The whole racing car world was originally established in the early 1900’s as a marketing ploy where people would come out to see the latest vehicles that they might consider purchasing for themselves. Simeone solely collected production cars, the type anyone could have purchased in a showroom. His collection, intentionally, drops off after the 1975 Alfa Romeo.

Corporate sponsorship and huge winning purses had killed any linkage between production cars and racing cars. Not only that, cars had become so technologically advanced that they were unmanageable for demonstration purposes. It’s hard to keep a vehicle down on the farm when it wants to jump to 120 mph in six seconds.

Simeone bought most of these vehicles when there wasn’t much of a market for them. Now their value is stratospheric — but talk of money doesn’t remotely concern or interest him. 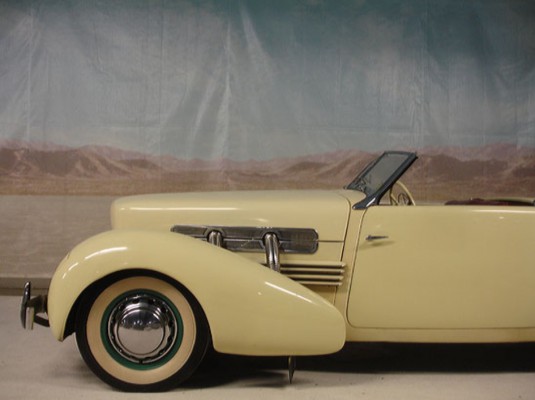 Typically, the mentality of car collectors favors perfection over preservation. Dr. Simeone wants to steer collectors away from extreme restoration to a philosophy of authenticity but “Right now we’re more of a hobby than a history.”

He recently held a think tank at the Simeone Foundation with invitees including such luminaries as Leigh Keno of Antiques Road Show and Malcolm Collum, curator of the Smithsonian Institution, to promulgate historic preservation standards for cars. The title for the event, which will also become the title of a book publication now in the works, was “The Stewardship of Important Historic Automobiles.”

“Part of its historical integrity is that it [the car] still runs,” says Simeone, who has enough acreage out in back of the museum to, periodically, run his vehicles on a demonstration track. It’s not about racing but it does enhance your sense of the cars’ sound (very loud), smell (castor oil), and movement.

So what does an international award winning museum do for its next act? Dr. Simeone is already energetically focused on educational programming efforts, a new emphasis on social relevance, i.e. history, a new exhibit on “What happened to GM?” as well as a look at alternative energy sources for cars. Remember that 1944 coal-fired car? How about that 1918 gas/electric hybrid?

If cars are supposed to be a guy thing, Dr. Simeone is still, specifically, interested in developing the museum in ways that would appeal to female visitors. From his experience, once they visit the museum their curiosity naturally fuels further interest. And yet, the audience he seems most concerned to reach is teenage males who have lost the competitive spirit that would motivate them to better themselves.

“The desire to do better, that’s what will make this country a better place,” Simeone emphasizes. His own inspiration in life was his father, a general practice physician who took his son on his $3. per house call rounds. His dad took him to junkyards, too, where they found abandoned, sometimes historically valuable cars. Sounds like he was an exceedingly attentive, engaged father and, clearly, Simeone’s hero in all that he’s done in his own very accomplished life.

Our conversation then took a surprising turn towards education, child development, history, art, and beauty. Though Simeone is loath to discuss money, he wrestles, philosophically, with what the museum’s holdings could represent towards the cure for a disease, for example. What is beauty for? Why does it matter? These are classic, artistic dilemmas. 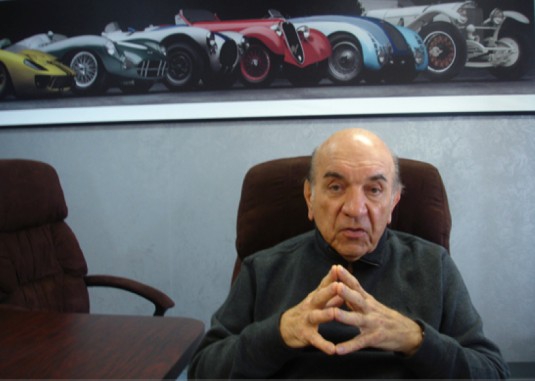 Physician and preservationist on wheels, Dr. Fred Simeone, is a cultural force to be reckoned with. We broke at lunchtime. Dr. Simeone generously invited me to take photos of his amazing car collection and to stop by again sometime to talk philosophy.

Tom Flora, at Evan’s Gulf, has been our car mechanic for about nineteen years. I have enormous respect for him as a whip smart master car mechanic and diagnostician. He runs his repair shop like an operating suite where top notch mechanics follow through on his diagnoses as he monitors the patient’s progress through a window.

Tom told me recently that his favorite car in the Simeone collection is the ’27 Italian Bugati, known for its great handcraft and high style.

Speaking of old cars, Tom and I both remember how he used to chuckle when I would drive up in our ’89 Ford Festiva, a little, faded red tin can stick shift with a steering wheel, a gas tank, and not much else. Tom, in the reserved, respectful manner you treat customers with who don’t know better, allowed that the car was a joke, “a toy.”

Year after year after year that indomitable little vehicle kept chugging along. It was an absolute joy as it conquered impossibly small parking spaces in the city. I recall one bystander actually watching my whole performance with bemusement, while I strategically wedged that little chunk of metal into yet another ridiculously tight spot.

No AC in summer but gas milege? Fuhggeddaboudit! – easily close to 40 miles per gallon in the city. But the sad day came, at about 100,000 miles, when I could see more road surface through the floorboards than outside the stubborn, hand-cranked windows. And so, the ’89 Festiva went “the way of all metal.”

Tom Flora seems like a happy guy, in general, but one of his few regrets in life is that he didn’t buy that lil’ ol’Festiva off of me. Oh, he had asked, somewhat sheepishly, if we were going to sell it — but then he blew it. He missed his chance to intercept that little metal miracle on its sunset journey to the junkyard.

So why the change of heart, why did he contemplate the purchase of a car that he thought was a joke…and even admit it?

Today, Tom will tell you with a wistful, admiring smile, as if recalling a favorite uncle who has passed away, “That car’s engine was so dumb simple it could have run forever!”

Gotta tell Tom it just occurred to me…I’ll bet, at heart, he’s a preservationist on wheels, too.