Q&A: Amale Andraos and Dan Wood on the Edible Schoolyard

Images: courtesy WORK Architecture Company With its startling lack of parks, community gardens, or farmers’ markets, the Gravesend neighborhood of southern Brooklyn is currently one of the least green sections of New York’s most populous borough. That is set to change this fall, however, when a neighborhood public school—P.S. 216—launches the first East Coast incarnation […]

With its startling lack of parks, community gardens, or farmers’ markets, the Gravesend neighborhood of southern Brooklyn is currently one of the least green sections of New York’s most populous borough. That is set to change this fall, however, when a neighborhood public school—P.S. 216—launches the first East Coast incarnation of the Edible Schoolyard, a program developed in 1995 by Alice Waters and the Chez Panisse Foundation to teach schoolchildren about food, farming, and nutrition. For the new venture, Manhattan’s WORK Architecture Company designed a solar-powered farm—complete with classrooms, a pizza oven, and a chicken coop—scheduled to be built over the summer on what is now a parking lot beside the school. The firm’s founders, Amale Andraos and Dan Wood, have previous experience with urban gardens: in 2008, they created Public Farm 1 (P.F.1), an undulating cardboard bridge filled with vegetables and herbs, for the annual MoMA/P.S.1 Young Architects Program. Recently, I talked to Andraos and Wood about the Edible Schoolyard and their longstanding fascination with the intersection of architecture and farming.

Why was P.S. 216 chosen to host the Edible Schoolyard?

Dan Wood: John Lyons, president of production at Focus Features, is on the Chez Panisse Foundation board. He was in New York City’s Principal for a Day program and the last school he went to was P.S. 216. He became a huge fan of the school and its principal. The school is amazing. In a district where one hundred percent of the students are eligible for the free-lunch program, she is running an amazing school: they have art classes, healthy snacks, a new library. It’s a real neighborhood with a mix of different students from many parts of the world.

Amale Andraos: The idea, as well, is that we will, hopefully, be able to expand the Edible Schoolyard to all five boroughs. So everybody felt this was a great school to test the first prototype.

DW: And the school has a huge parking lot!

How did you research building an urban farm?

DW: We talked to the people at the Added Value farm, in Red Hook, to see how they extended the growing season. That was a big issue from the start, because we needed to figure out some way to get to use the garden during the winter months.

AA: And we talked to Fritz Haeg. One of his Animal Estates sculptures will be in the garden, for mason bees. We’re very happy about that.

The existing Edible Schoolyard projects don’t seem to have much of a design component. How do you think design will add to students’ educational experience?

AA: The Kitchen Classroom building at the Berkeley [location] already existed; but the garden has a very beautiful sensibility—organic, meandering. So when you’re there, you do get a sense that it was carefully designed. Alice Waters and her team let us know how important design was to them. We were very concerned about what materials we used, how well we organized the space. And P.S. 216 has a new Robin Hood library as well. It’s quite beautiful and an interesting scale, so we were also aware how design has already been successful in the school.

DW: Because this Edible Schoolyard is in NYC, there’s a lot more scrutiny. We had to go in front of community boards, meet with the borough president—in New York it’s clear that good design is important. At the same time, we tried to re-create the emotions and the feelings of the original Edible Schoolyard, which has developed in a more ad hoc way over the last twelve years. We presented our plans in a conference call to Alice, and she felt we understood what the program was really about, and were able to take it forward through design. 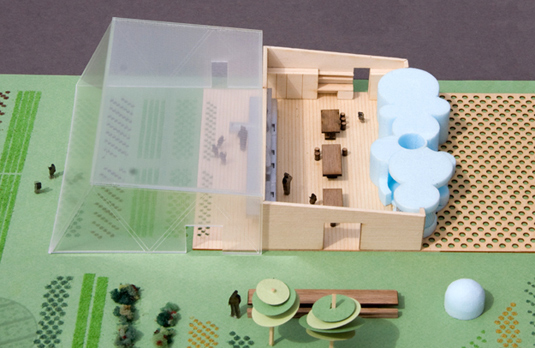 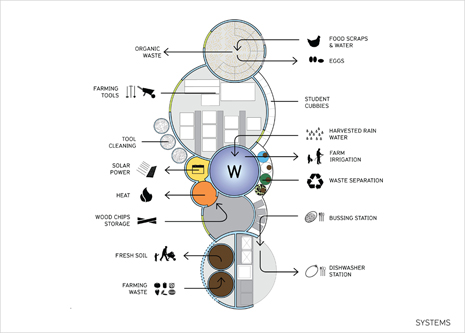 Your design uses a series of connected circles to house the farm systems. How did you choose this arrangement?

DW: The roof was designed to act like a funnel, channeling rainwater to the cistern, which had to be round, so that helped set the design. The rest of the systems then fell into place naturally: the place for the batteries for the solar panels, a tool shed, a composter. The circles set this section apart and we think it’s more engaging for students, to raise their curiosity about what’s going on there, hopefully encouraging them to learn about the sustainable systems.

AA: And they look kind of like an organism. The circles also remind us of P.F.1!

DW: We call this our “Russian doll” project—three distinct objects that enclose one another. The greenhouse is gridded aluminum and polycarbonate, the school building is more solid and warm, and the systems wall is a bit more organic and techy. Each component of the kitchen classroom has its own identity, but each is interdependent on the other.

What innovations are you bringing to farm design?

DW: Well, the chicken coop is one of the circles of the system wall as well and is accessible from both sides, so kids can grab eggs directly from the kitchen. That’s kind of an improvement! But the true innovation is the moving greenhouse. We hope it not only extends the growing season but that using it will become a ritual for the students, a way to mark the seasons. Eliot Coleman developed them, so they’ve been used before, but this is the first time on an urban site. The plants are put directly in the ground under the greenhouse—that’s called a “soil to soil” greenhouse—and they can grow cold-weather crops all winter long. Then, in spring, the greenhouse slides back on tracks over the kitchen classroom so that the land can be used for a new crop. It doubles the output of the garden. Coleman’s greenhouse uses fabric, but ours is polycarbonate.

AA: We think it will engage the kids—they like moving parts and mechanical systems.

What do you make of recent criticisms of the Edible Schoolyard, that it has no known pedagogical track record and is a potential waste of school resources?

DW: Well, that criticism seems to be about improving standardized tests. As far as we understand, the garden is extra to the curriculum. I don’t know that its impact is measurable. It’s about teaching kids to eat healthily, get in touch with nature. I don’t know how you test for that.

AA: The cooking component is what makes the Edible Schoolyard so special, compared with just a productive schoolyard garden. They have a lot of experience in merging what they do in the kitchen and the garden with the classical school curriculum. They find ways to teach about math, science, history—tying the work in the kitchen in with what the kids are learning in school. I find it very hard to believe many people are against ripping out a black asphalt parking lot to build a garden! In our experience, there isn’t a lot of opposition to changing the way we eat and making productive green space in the city.

Do you do any gardening yourselves?

AA: Not yet, but hopefully we will this year on our property in Rhode Island. We have great respect for farming. With architecture, you build it, take photos, and say bye. With farms, you have to be there every day, take care of it constantly-–that is very humbling.
.

Related: Eva Hagberg profiled Andraos and Wood in “On the Cusp.” In 2008, four top American chefs–including Alice Waters–talked to us about the designs of their restaurant kitchens.