Bjarke Ingels is known to fill up rooms where his fellow architects come to be entertained, to learn, and to bask in the young Dane’s enthusiasm and seemingly inexhaustible energy. Most recently he made an appearance at Relative Space in downtown NYC, at a pre-holiday evening organized by designerpages. There, he revealed, among other things, […]

Bjarke Ingels is known to fill up rooms where his fellow architects come to be entertained, to learn, and to bask in the young Dane’s enthusiasm and seemingly inexhaustible energy. Most recently he made an appearance at Relative Space in downtown NYC, at a pre-holiday evening organized by designerpages. There, he revealed, among other things, that BIG (Bjarke Ingels Group) now has a New York office. While others of his profession lament the lack of work, the leader of BIG is poised to start in on one of his mega-projects in a city crushed by frozen credit.  Michael Holt and Marissa Looby talked to the architect who, among other inventive moves, likes to coin expressions to fit his new ideas, such as “hedonistic sustainability,”  “neighborship,”  “inclusivism”. The interview focuses on BIG’s  “trilogy” of housing complexes in Copenhagen – the VM House, the Mountain House, and the most recent 8House (featured in the December 2010 issue of Metropolis). 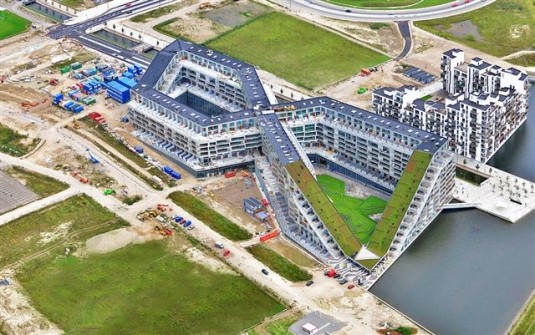 The 8 House, by Bjarke Ingels.

Michael Holt: The recently completed 8House is you third project with the same developer in what you label a “trilogy”. Could you explain a little bit about this trilogy of housing complexes?

Bjarke Ingels: The term of trilogy? I think it’s mostly a result of the fact that it is three buildings! All three projects are located in the same new part of town, governed within a questionable master plan. As a result the whole neighborhood is suffering from a sort of dilemma or challenge – a typical tabula rasa modern master plan – how do you impregnate the future city with diversity and identity? The whole master plan was based on a single typology – the perimeter block – which is the sort of archetypical European typology dominating most old European cities. Hence, all three projects try to deal with this idea of how can you wedge as much diversity and surprise and variation into a virgin city and how can you liberate yourself from the tyranny of the perimeter block. 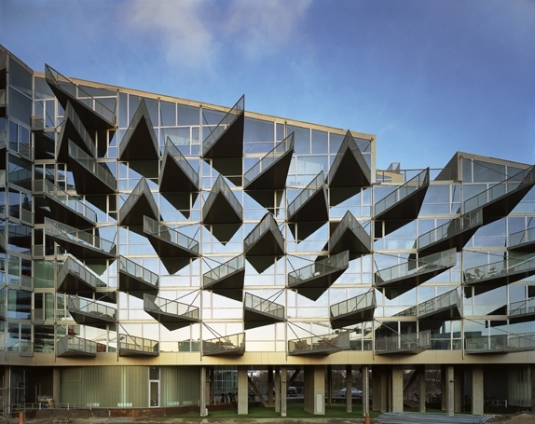 The VM House, by Bjarke Ingels.

MH: How then does this master plan relate to the existing city?

BI: The new development is very close to historical Copenhagen, to the centre of the city, but what you have is this wedge of a big green park – which is two or three times bigger than New York’s Central Park – and on one side of this park is quite a dense neighborhood of suburban homes and then on the edge between the suburban homes and this park they have put this narrow strip of urban density along the new subway. So, basically when they made the subway for the existing city they extended it into the green fields to pay for it. In that sense, it is a bizarre condition. You have a stretch of something that has the infrastructure of urbanity because you have public transportation and you have high density but it is wedged between green fields and suburban homes.

Marissa Looby: Yes, I recall the photograph of the Mountain Project with a suburban house in the foreground and the Mountain apartments rising behind.

BI: Yes. It is bizarre, when you are in suburbia and you look over this field and it sort of rises up, so much so it almost becomes contextual in a sense where it is marrying the transition from suburbia to urban density. 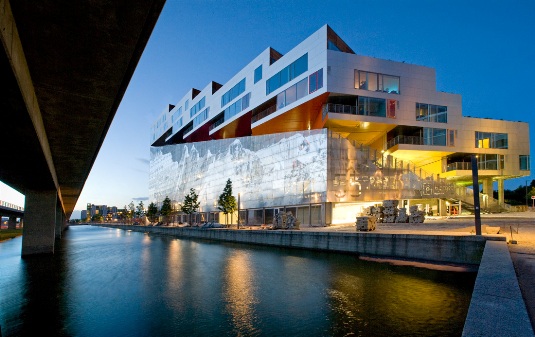 ML: So the extent of your housing trilogy exists within this master plan….

BI: Yes, There is a city plan for that whole neighborhood. We haven’t done anything to the master plan. What we have done, essentially, is build three blocks. The first of these– the VM House – was attempting to break the confines of the perimeter block, incarcerating the courtyard, and by then basically breaking it up and twisting it into the V and the M all the apartments would benefit from direct views in all directions. The triangular balconies created this populated south facade where it was possible to have conversations with your neighbors three floors down — there was something socially interesting occurring. In the Mountain house, this occurred on a much more massive scale, where you had interaction diagonally across the gardens, cheating a sense of neighborhood or ‘neighborship’. And then with the 8House, we took that level one step further where the neighborhood of townhouses occupy the depth differences between commercial and residential to actually have little gardens with trees and even a street or bicycle path that allows you to stroll all the way up to the roof. 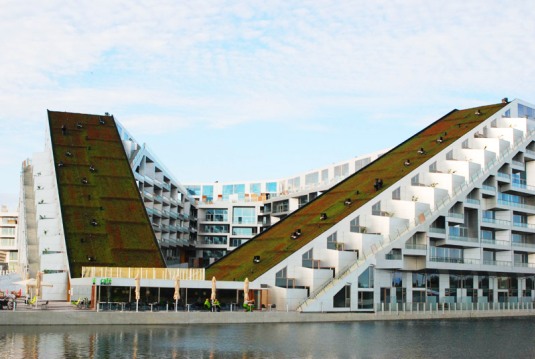 MH: The last and final instalment of the three housing blocks was the 8House – the largest and….

BI: In Denmark, in the late 60’s early 70’s, there were two housing developments with a thousand units in each, so in comparison, 8House has 500. One of the developments was purely slabs of high rises and the other one was dense, low courtyard houses. I’m not sure this is the case anymore but back then, the high rises were deemed to be massively unsuccessful–sociologists  figured out that children living on the third floor or above would never go down to the playground because their mum couldn’t see them from the kitchen window. It was a case of David and Goliath where the little, dense, low stuff won over the big towers. Since then there has almost been a ban on density.

What we essentially tried to do was to take the virtues of the dense/low where you have community and pedestrian circulation and to introduce it into the form of the urban block, so in a way a bit like the Mountain where you combine suburban qualities of a house with a garden with the urban qualities of an urban location and view. In the 8House, we took the public element, where you have the possibility of spontaneous social encounters within the block which is, traditionally, something that only occurs at street level when everything else above is dead or, at least,  private. 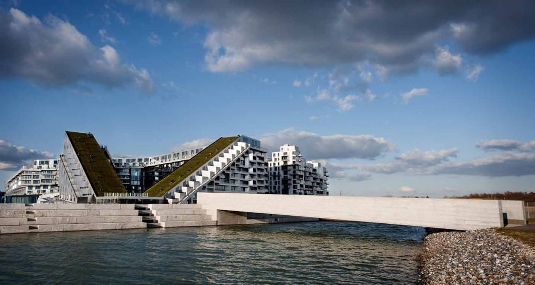 ML: Were these 1960s and 1970s blocks a comparable size to your housing units? Was there a negotiation taking place between the developer-driven yield requirements and those of the individual?

BI: I think especially in a Danish context there is this dichotomy between public and private interest and I think quite often the two sides actually have the same interests. The public wants amenities, a nice neighbourhood, the possibility of sunlight on the squares, etc. Then if the street is lively, it is possible for the shops to actually have a turnover, and as a result it is perceived of as a nice neighborhood. Therefore, the apartments are more attractive. So, in many ways the public/private interest coincides.

There is an illusion of the ‘evil developer’. Of course the developer doesn’t want to waste money. If architecture is the art and science of maximising the possibilities for unfolding human life then the developer is totally with you. If it’s the art and science of doing eccentric, artistic, expensive, and unbuildable things that aren’t going to last then, of course, he won’t be that accommodating. So, if you somehow try to maximise the possibilities and then…

MH: Is it, then, a case of political mediation?

BI: In our book, Yes Is More, I am trying to write a sort of -ism.  I think “inclusivism” would be relatively interesting.

You know, the typical idea of architecture is something exclusive, exquisite, expensive with only an elite able to appreciate it. Whereas “inclusivism” is a much more urban approach where you look at the city and the condition of the city is that it is populated by  a diversity of life forms with the diversity of concerns and demands and conflicts and contradictions. As an architect you try to turn all these influences into a driving force for your design. By committing yourself to saying “yes” to every single demand you force your architecture out of the traditional typologies- because most typologies are based on a single concern. Whereas if you were influenced by a multiplicity of concerns, then all the easy answers become impossible, because they will step on someone’s toes. As a result, you force the architecture not into the lowest common denominator but into something more exciting, more back-bending. I like this idea that designing becomes a game of urban Twister, with hands and feet in different positions! It’s all about increasing the demands until it becomes an almost impossible program so the architecture gets more exciting. 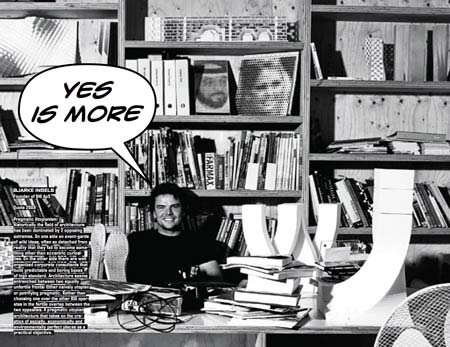 A panel from the book Yes is More.

ML: But then your complex ideas are broken down into understandable logic. This is shown through your comic book illustrations, and your diagrams on your website.  Are these means of communication a strategy? Is there no need for plans and sections in this process of communication?

BI: We are actually working on a new book with a working title of Bigamy or Split Brain, where you can have two wives or two husbands…we want it to be as different from Yes Is More as possible. So, in the new book we’ll have a lot of drawings. El Croquis was a major part of my education – I literally enrolled in the Royal Danish Art Academy to become a cartoonist and gradually just got stuck with architecture. I had no sort of…I mean, I knew Jorn Utzon [the Danish architect] of the Sydney Opera, but that was it. So, I had to start from scratch. And, because it is the art academy it is very liberal, you pretty much get a key card and a library card and copy card and that’s it, see you in 5 years! So, I ended up going to the library and El Croquis had very extensive documentation of the work was very helpful. You could decode it yourself.

Bjarke Ingels previously answered some quick questions for us earlier this year, and his Mountain Dwellings project was featured in our December 2008 issue.

Michael Holt and Marissa Looby are recent graduates from the Master of Science in Advanced Architectural Design degree, Columbia University. They both reside in New York where they write and practice within the architectural profession.