On September 24-25, an expected crowd of 45,000 will descend upon the World Maker Faire @ New York Hall of Science. The site, initially built as a pavilion for the 1964 World’s Fair, was a showcase of mid-20th century American culture and technology. So the venue is appropriate for this 21st century fair that will represent a […]

On September 24-25, an expected crowd of 45,000 will descend upon the World Maker Faire @ New York Hall of Science. The site, initially built as a pavilion for the 1964 World’s Fair, was a showcase of mid-20th century American culture and technology. So the venue is appropriate for this 21st century fair that will represent a growing community of makers that explore the capabilities of technology, showcasing a cultural reemergence of the Do It Yourself Community, embracing fearlessness towards ingenuity and curiosity.

I asked Dale Dougherty, editor and publisher of MAKE magazine and founder of Maker Faire to talk about the DIY culture–this collective of designers, scientists, and engineers drawn together by a common desire to make, to tinker, to hack––creating and reusing materials and technologies.

Having risen from the origins of early science fairs and Popular Mechanics, what’s different about this emerging DIY community that shares a passion and curiosity for technology and reusable materials?

Dale Dougherty The Internet provides us with information to learn how to do things, even very complex things, and has helped fuel a growing desire to hack the world around us. By “hacking” I mean changing and modifying technologies to meet our needs. The term first applied to computers but has come to mean creatively modifying any aspect of the physical world. The Internet and computing have greatly expanded the world of amateurs, in obvious areas like computers, robotics, electronics, but also things like on-demand printing and even mundane things like booking your own travel arrangements or auctioning off the junk in your garage. Very few areas have not been impacted by the do-it-yourself ethos. And the ability to learn from others, and to share what you learn via online communities and social networks, help to amplify people’s enthusiasm for doing it themselves.

Since it began in 2006 the Maker Faire has now held 8 events in locations across the country – with over 250,000 attending and over 3,000 people presenting their work. What is the range of expertise represented? Do you see an untapped resource of creative talent in this growing community of artists, designers, scientists and engineers? How does one access the conversation?

DD The untapped resource is creative people doing novel and interesting things. There is an exciting mash-up of experience that comes together at Maker Faire and everybody learns from each other and the group as a whole, getting expertise from other people, building something similar, or leveraging some skill from one project and applying it to something else. The Internet is where that conversation is always happening, but the physical proximity of events like Maker Faire is also important, as people want to gather together and learn face to face. In fact, the rise of hackerspaces and other group workspaces show that people want to be together in person, with the benefits of shared tools, to do their projects and activities. 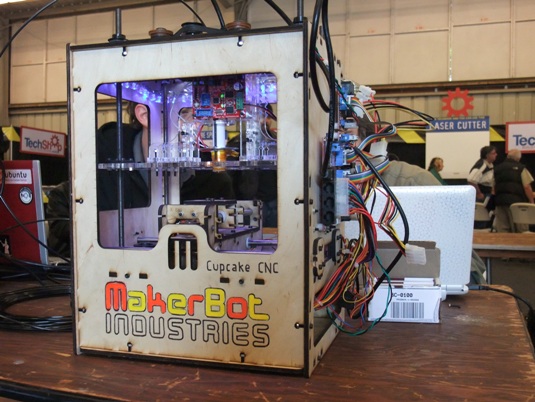 What would you consider to be some of the more innovative approaches to product innovation to discover at the World Maker Faire?

DD What we are seeing is a democratization of technology and the development and use of new tools, materials, and technologies, such as really cheap embedded computer systems. The growing 3D printing movement — to create computer printers that can produce three-dimensional objects sent from computer design files – is a perfect example. There are large corporations producing such devices, but a lot of the cutting-edge R&D is being done by hacker groups and individuals who collaboratively develop this technology and bring serious products to market, all done on shoestring budgets and by working online, in person, and by presenting and discussing their work at events like Maker Faire.

In a society that has shifted from a passive-consumer scenario to a more informed, engaged, hands-on culture – how do the original ethics of an open-sourced dialogue inform diverse opinions in a multi-generational approach to crowd sourcing?

DD I would like to think we will end up with a world where it’s not uncommon for people of diverse ages and backgrounds to know how the technology in their life works, how to fix it when it breaks, how to improve it to fit individual needs, how to print out replacement parts, and so forth. That approach is not going to be for everyone, but I think the tools to take that kind of control will be available to those who want to live an engaged, hands-on life. We’re already starting to see the open source ethos – the sharing of original source files and the ability to modify and change things as desired, which started in software — spread to hardware, to government, to law, to intelligence-gathering, and to many other areas of society. We hope that’s a trend that continues.

While each location has a specific culture and unique character of place – are there consistent characteristics and values that are present? Is there an international presence within the World Maker Faire?

DD There are so many diverse subcultures of makers that are drawn to the Faires, from computer hackers and robot builder to crafters to fire artists and art car builders. But I think the thing that binds them all together is their intense enthusiasm for making things and their desire to share that enthusiasm with others. Every location might have its own flavor, but the common theme is the passion for building something with one’s own hands. Maker Faire provides the gathering place to come together, see what everyone else is doing, and to show off what you’ve made. There are some people that come from other countries, but the US Faires are mainly US makers. There have also been several Maker Faires held in the UK and in Africa.