This year at Neocon—the annual contract furnishings trade show that opens at Chicago’s Merchandise Mart on June 11th and runs through the 13th—DesignerPages.com and MMPI are launching QR Leadr, a QR code powered lead retrieval App for iPhone and Android. Marking the occasion, I engaged Jacob L. Slevin (Jake), co-founder of DesignerPages.com, via-email, to discuss […]

This year at Neocon—the annual contract furnishings trade show that opens at Chicago’s Merchandise Mart on June 11th and runs through the 13th—DesignerPages.com and MMPI are launching QR Leadr, a QR code powered lead retrieval App for iPhone and Android. Marking the occasion, I engaged Jacob L. Slevin (Jake), co-founder of DesignerPages.com, via-email, to discuss this new service, as well as others being introduced, how they evolved, where they’re going, and how they will change the industry for the better.

Jake knows the workings of design offices. After studying architecture at Cornell he worked at FxFowle under Dan Kaplan and Guy Geier where, he says, “the concept emerged. Dan and Guy are two of the key mentors who have helped me bring DesignerPages.com to market. And I was fortunate to team up with a high-school friend, Avi Flombaum who, at the time, was the technology director at a New York litigation hedge fund.

“Over time, I looked to collaborate with companies facilitating this conversation. I was naturally drawn to Merchandise Mart Properties Inc. (MMPI) who addresses this problem in the physical space with expos like Neocon, and through their many Design Centers. In partnership with MMPI, we developed web platforms for expos, the Showrooms App, and most recently the QR Leadr App. The common denominator among these technologies is our product search service–an open repository that I hope will propel ubiquitous publishing standards for commercial product data. That’s my mission.” After this introductory chat, Jake and I got into the details. -SSS 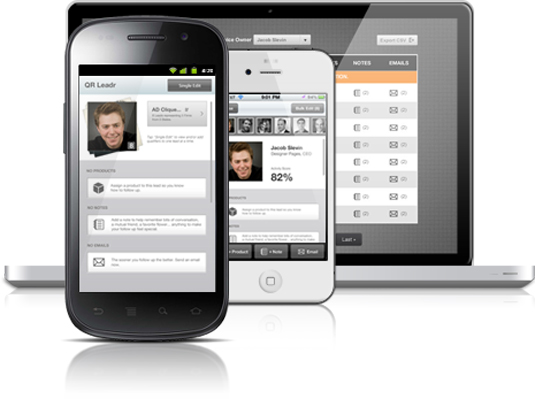 Susan S. Szenasy: At Neocon you are kicking off DesignerPages.com’s QRLeadr system of information exchange between manufacturers and designers. Would you explain the thinking behind this mutually beneficial system?

Jacob L. Slevin: I’ve never liked the phrase “Lead Retrieval”. It sounds one-dimensional and distant, whereas expos are social and often intimate. Designers come to trade shows to discover information and gain knowledge. They’re trying to make sense of their own interactions with exhibitors and keep track of the products they’ve seen. Exhibitors are the sellers, thus more heavily incentivized to manage these same attendee interactions with their own brand and product. QR Leadr aims to help exhibitors tackle this assignment more completely and to better preserve these interactions.

Specifically, QR Leadr augments the key record of the attendee-exhibitor interaction. While legacy solutions focused simply on saving an attendee to an exhibitor’s list of leads, QR Leadr encourages the exhibitor to append product(s) to this exchange. Exhibitors can customize product lists online in advance of NeoCon so assigning product(s) to attendees in their showrooms is easy and fast. This is really my highest-level aspiration with QR Leadr and hopefully exhibitors will leverage the new toolset.

We’ve also implemented functionality for exhibitors to follow up with attendees in real-time, immediately after scanning attendees’ badges. Some exhibitors will use this feature-set to distribute digital literature to attendees they’re hosting, rather than piling on yet another print catalog or brochure. 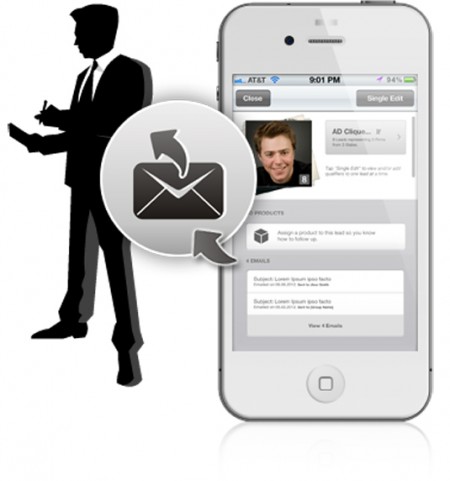 Finally, QR Leadr is an App that can be installed on any iPhone or Android, meaning that an exhibitor is no longer confined to a single device at the front of their showroom. The App is designed to travel in the hand of each and every staff member. I hope to even see exhibitors making conversation in elevators, cafes, etc. and recording these interactions too.

SSS: Last year at Neocon, there were QR codes everywhere, but the manufacturers seemed somewhat clueless on what this interesting little graphic is capable of doing. What has changed from last year to this year?

JLS: People need to first understand that a QR Code is data–that’s it. And data is only as effective as it is accessible and consumable. At Neocon 2011, I remember seeing a lot of QR Codes printed on table-mount signage. An attendee could scan the QR Code, which in turn might open to a webpage on their device. In many instances this was an unfriendly, even unreadable webpage for mobile browsers. What next? With no ability to save or share information, no ability to ask a question and, in short, no practical use case, printing a cut sheet would have actually been more valuable. Technology for the sake of technology is meaningless. It needs to be developed with the understanding of what value it’s intended to provide. 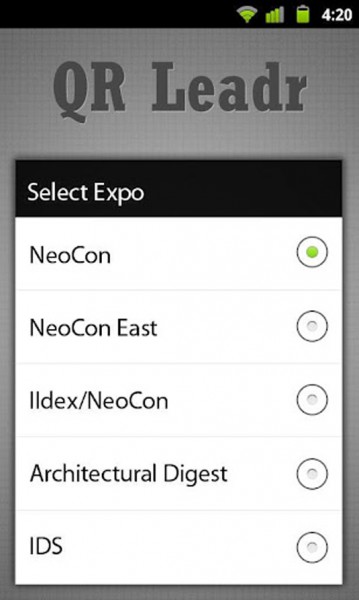 In the case of Neocon, the solution requires publishing standards such that all QR Codes fold into a universal solution for attendees. QR Leadr is a single software solution that accurately engages with the standard QR Code stamp MMPI is printing on all badges. I’ve considered releasing a FREE attendee license for QR Leadr, so attendees can scan each other’s badges in lieu of exchanging business cards. If there’s any free time in the remaining days before Neocon, maybe I’ll do it!

SSS: Clearly you are driving change. Talk about your belief in the technology and your vision for how it can be used to benefit all parties (manufacturers, designers, and their clients).

JLS: Advances in technology are unavoidable and our industry won’t escape this new information age–despite being very late to the party. I have many theories as to why this is the case, but more importantly, since entering this industry nearly four years ago, I’ve noticed an accelerated acceptance of the Internet and the opportunities it can provide for the profession. QR Codes are consumable by the every-day smart phone. They are easy to create, easy to print, and easy to apply. And in our industry specifically, one in which the physical and tactile dimensions will never cease to exist, they will help usher in an age of sensible augmented reality. Of this I’m certain.

SSS: What will such an immediate system of information exchange do for the current, slow, often (still) paper-based communication system between designer and manufacturer? I kind of know the answer, but your view would be much more valuable than my guessing.

JLS: What it will do and what it can do are vastly different. Like any new technology entering the market, there’s a learning curve that needs to be accepted as it pertains to the consumption of new features.

In 2012, I anticipate forward-thinking exhibitors will rigorously append product(s) to attendees in their showrooms, and many of these exhibitors will use the real-time follow- up functionality to send off digital literature, hopefully reducing the print clutter. They will closely study these interactions post-Neocon so they’re able to re-connect with attendees in a manner that accurately reflects the attendees’ true interests. Wouldn’t it be beautiful if exhibitors all stopped spamming attendees post-Neocon with generic “Thank You” emails?

In 2013, I anticipate far less print literature, as exhibitors will all have had an opportunity to grasp the opportunity and value that 2012 provided. If I can be the kid that helped do away with all the regrettable, wasteful printing of marketing collateral at NeoCon, that would make my year!

We’ve had several exhibitors approach us regarding custom integrations with QR Leadr, but unfortunately there wasn’t time to pursue these engagements in 2012. I hope to see some of these ideas come to life in 2013.

For instance, one exhibitor was interested in allowing attendees to check-in via Foursquare, pushing notifications to the mobile devices of their sales representatives’ via QR Leadr, resulting in more intimate face-time with clients. Another was interested in the hospitality approach, integrating QRLeadr with beverage and food ordering. Attendees would place orders upon being scanned into the showroom. These orders would be transmitted to the barista immediately and ready for pick up by the time attendees had reached the back of the showroom. The last concept again pushes the boundaries of physical and digital space, this time integrating interactive, geo-aware floor plans of exhibitors’ showrooms into the QR Leadr App. The App would register the user’s location and pull up literature for nearby products, and email this literature to attendees on the spot, with the touch of a button.

Obviously, with unlimited resources, typically more a function of time than money, anything is possible.