The Emerson professor talks about his team’s incorporation of 3-D virtual worlds into the planning process.

Eric Gordon, a professor of new media at Emerson College, and Gene Koo, a fellow at Harvard’s Berkman Center for Internet and Society, just won a MacArthur Foundation grant for their innovative new take on community planning using Second Life, a three-dimensional virtual world which users explore as avatars. I spoke with Professor Gordon over the phone last week about how holding community meetings in Second Life transforms the planning process.

Tell me about the site that your workshops were focusing on.

We had the opportunity to work last summer with Library Park in Allston, which is a neighborhood of Boston. The park is being designed by Harvard University as part of their expansion into Allston, so it’s the first piece of a much larger development.

What’s wrong with the way architects’ plans are used at a typical community meeting?

The typical two-dimensional plans assume that the people viewing them have some understanding of architecture or urban planning—they adopt a professional discourse and bring it to a lay community, without enough thought into how to communicate abstract spatial ideas in a way that people can relate to.

So how did you change that format? How did your community meetings work?

At each workshop we brought about fifteen community members together in a room, and they each had a laptop that we supplied. What they were looking at was a virtual reproduction of the park in Second Life. We built the context around the park—the library, and the houses around it—and left the park space open, as a big empty lot of grass. So first we would all walk through that tabula rasa of the site, and then we went through a brainstorming process, where people would throw out ideas [for what they wanted to see there], like a basketball court, a big sculpture, or seating, and we had a designer on hand who created those things on the fly.

Then we would talk about why something worked or didn’t work, and whether it could be moved. We also allowed people to walk through the virtual park and plant white flags in front of things; then, by touching a flag, they could vote that feature either up or down, so it would turn a deeper shade of green or red as more people voted. And they could also leave comments in the flags. 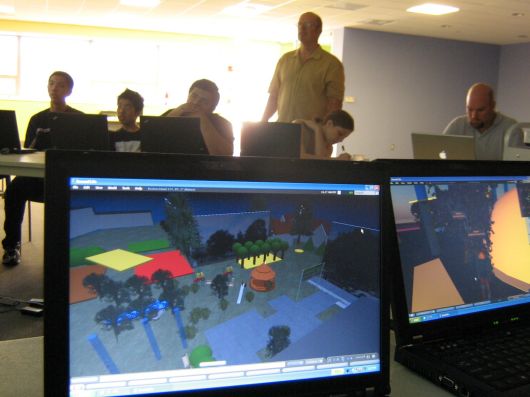 What about people who didn’t know how to use Second Life?

Hardly anybody knew how to use it. So another way we got people involved was that we hired three local youths as “technology interpreters.” They were at every one of our meetings to help people who weren’t comfortable maybe even touching a computer. And that forced collaboration between young and old created a fascinating dynamic. That was one of the most powerful elements, bringing young people into the process not as an extraneous part but as an integral part. Often young people are brought into these community meetings in a “crayon charrette” that the kids get to do, but it’s not taken seriously. But in this case, you need these kids to use the computer.

When people added a feature to the site, were they ever surprised that they didn’t like it as much as they thought they would?

Both the basketball court and the baseball diamond they wanted were too big for this park, and you could see that once you were in the space. They also said they wanted trees at the border of the park — and then, walking through the paths, people commented: “Well, the trees make it feel dark and kind of cut-off from the surrounding area, making it feel unsafe.”

You had the community role-play as different avatars, right? What was the purpose of that?

Right. We gave people little slips of paper with a character backstory, like: You’re a mother of two young children; you just picked them up from school, you’re going to the library to get some books, and then you want to go to the park and sit outside and read with your kids. Or another example was: You’re a 65-year-old single man in a wheelchair, and you want to go to the library and get a book and sit outside. So we had people go through that. We would give them an avatar in a wheelchair. And then we got comments like, “Is this dirt path going to cause me trouble in my wheelchair? Are these steps going to be a problem?” One of the more interesting things that happened is that people started talking as their characters. Sometimes we had to stop them and ask: “Are you speaking as yourself or as your character?”

Did this new format change the dynamic of who participated in the discussions?

It did get people to speak up who, my sense is, would not have said a whole lot in a typical community meeting. Because the people in the room didn’t know whose avatar was whose in Second Life, it gave people an opportunity to speak their mind [by leaving comments on the designs] without disclosing their identity.

You’ve just won a MacArthur grant to expand this program to other settings. What’s next? Are you changing your approach at all?

Next we’re focusing our efforts on Boston’s Chinatown, which is going through a fairly substantial master-planning process. This time around we’re likely not going to be using Second Life. We’re interested in moving more in the direction of gaming; one of the things I mentioned was this role-playing component and how effective that was in getting people to get out of their skins. We’d really like to develop that. So before, we gave people slips of paper; but this time we’re actually going to code these characters in a little two-hour game. People will go on quests within Chinatown itself as their character, so they can understand the give-and-take of certain issues, like urban density or walkable streets. We all know that when you go into a community meeting you’ve got a bone to pick. But if you’re forced to experience the space and to identify values and priorities from another perspective before you pick your bone, then you might actually change your perspective a little bit.