About seven years ago James Benya, the Portland, Oregon-based lighting designer, introduced us to daylighting. Much to his chagrin, daylighting subsequently became one of the most popular and most commonly misapplied green building strategies. When we decided to interview leading lighting designers for our Leading Luminaries story, we knew the outspoken Benya would be one […]

About seven years ago James Benya, the Portland, Oregon-based lighting designer, introduced us to daylighting. Much to his chagrin, daylighting subsequently became one of the most popular and most commonly misapplied green building strategies. When we decided to interview leading lighting designers for our Leading Luminaries story, we knew the outspoken Benya would be one of our subjects. An edited version of his conversation with Derrick Mead follows.
–Martin C. Pedersen

About five years ago, you helped us identify daylighting as the next big thing in the field. What’s happening now?

More and more, we’re seeing every project come in with LEED aspirations. People are looking into daylighting. I got a call yesterday from a professor at the University of Texas Austin School of Architecture, who wanted me to give him a serious set of daylighting examples. I said, “OK, but you’ve got to understand, I’m not going to give you bad examples that have been spun into good ones. I’m going to give you projects that are simple, work fine, but may not be glamorous.” People in architecture and engineering tend to over glamorize projects, because of their aesthetics, and sweep the concerns surrounding energy efficiency and daylighting under the rug. I said, “These are genuine projects, but you’re not necessarily going to see a lot of them published. They’re everyday jobs.” We’re not going to fix energy problems in the world by turning edifice projects green with a whole of money and greenwashing. It’s going to be the other 10,000 projects where we’re going to make the biggest difference.

You’ve been critical of a lot high profile projects that have used daylighting. Why?

Because you’ve got to get the window-to-wall ratio down to a practical percentage. Take the New York Times Building. Here’s an overglazed building, where it’s very difficult for people to work near the windows, because there’s so much light. In order to control it, they had to put in shades, which defeats the purpose of the daylight. The Aria hotel, in Las Vegas, has an almost 100% window-wall ratio, with many of the facades facing the sun. And that’s in the desert! Not a good idea. Of course they employed fritting and other technologies to reduce the impact, but the fact of the matter is you can’t have that much glass without having thermal gain problems. You can underglaze a building, in which case not much happens. It’s an insulated box. But you can overglaze a building, so any savings you achieve by turning off lights are more than eaten up by the solar gain. There is a balance or plateau in most projects, where you can make tradeoffs. But that plateau has a rather limited range. It’s between 25 and 40 percent window-to-wall ratio. At 25 percent you get less daylight but better insulation; at 40 percent you get more daylight but less insulation. They’re both reasonable tradeoffs. You go to a 100% window to wall ratio, and you’re in trouble. That message doesn’t really get out. We’ve got to encourage the community to seek that technical balance. You must design buildings from the ground up with that balance being part of the thinking. It can’t be something that someone tries to fix or fit into the project after the architecture is determined. The New York Times building is a great example, I think, where specific architecture was determined, and they brought in a daylighting expert to try to make it work. In that regard, it’s not a very good building. 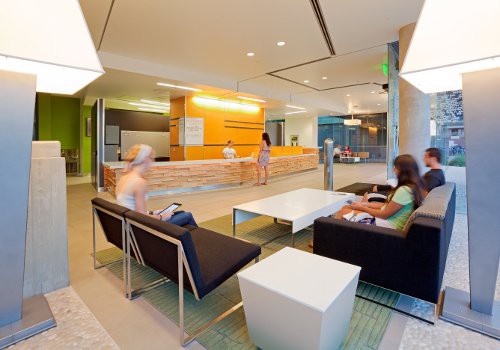 What kind of computer software do you use? Does your firm have wide selection of software options?

We use a mix of things. We’re learning to use the DIVA system developed at Harvard Graduate School of Design. Christoph Reinhart is a daylighting guru, probably one of the top ones in the world. He and his graduate students at the  GSD developed a software suite that manages Radiance. Radiance has always been a very hard piece of software to use, and only a few people developed the expertise to use it. With this suite, more people will be able to use Radiance as an analytical tool. DIVA is designed to encourage the development of building models in schematic design, using one of several relatively inexpensive sketch-type tools. In this case it’s a 3D modeler. I see a lot of architects using Sketch-Up, to develop building concepts before they take it into the 3D building information model-world. That seems to be a very popular way of doing things. DIVA is along those lines. You conceive of the building, inexpensively and without too much complication, without too much data, and then you take it into the model. It’s a very effective tool. Ultimately you get a set of results that are far more advanced, not only in terms of the information they provide, but more advanced than anything else that I’ve seen that’s out there today. It’s a complex tool; it takes training and experience.

Have LEDs lived up to their promise?

LEDs improve everyday. I think people make the mistake of wanting there to be a silver bullet: the LED arrives one day on the planet—and everything changes. Instead it’s a continuum of change. This year, there were several major breakthroughs. One of them was the 2×4 troffer that’s so common in offices, lower-class retail projects, in millions of projects. The LED version is now not only more efficient, but it’s beginning to cost within the rational additional amount over a fluorescent system. So instead of a $110 high performance fluorescent fixture, you can get about a $180 LED fixture that’ll way outperform it. That’s a sea change. LEDs are creeping into the marketplace. One of the great areas is outdoor lighting, which has started using 10 and 20 watt LED wall packs, which will get rid of all the light-pollution creating HIDs. And I’ll be damned if I ever use a CFL (compact florescent) down light again. The LED down lights are so much better, more efficient, the color and dimming is better. Wall washing is another place where LEDs are coming on strong.

The idea of solar powered lighting is kind of silly. There are a few places where it makes sense, but if you look at it carefully, there’s a problem with the technology, because it encourages people to not connect lighting to the grid. If you don’t connect it to the grid, then you’ve got a problem: what happens when you have three or four cloudy days in a row? The batteries don’t charge. The other thing is, we should be using the electric energy generated by the sun when we get it, and not try to store it. Storage technology is expensive and not good right now.

Are there other green lighting technologies that are important?

We’ve got to talk about lighting controls. They’re becoming an increasingly expensive part of our total building budget. The most successful project I’ve done so far, the Sidwell Friends School in Washington, D.C., has been measured using only 8% of the normal lighting energy for a building of similar size. Even the New York Times building, which from a daylighting standpoint has its problems, the control systems have reduced the energy consumption of the original lighting by at least 60 percent. If it weren’t for those lighting controls, people would have just turned on the stupid lights.

What will emerge as the biggest challenge for lighting designers in the coming years?

Number one is learning to use daylighting and other technologies to design efficient buildings. Everybody knows there’s a giant pushback against incandescent bulbs being banned. I have a neutral position on that one. I don’t think banning light bulbs is necessarily the right way to go about doing things. In a country that fails to have a national energy policy, to ban incandescent bulbs, is a silly thing to do. Lighting designers have got to learn to work with a less-is-more  philosophy. That’s not been our history. I’ve designed a lot of projects that have been in super efficient buildings, but they can’t compete in lighting design competitions because they don’t have enough lighting! We need to change our thinking, so that we give more equal or even more importance to projects that use less. I didn’t say use less money. We will have to use efficient products, and they may cost more money up front, but we can still maintain a balance of cost and efficiency,. So I’d like to see more high-technology or high inventiveness, with “using less” being considered the way we do design.