Last September, during London’s design week, I travelled to Hackney in East London to visit Jasper Morrison at his studio and shop, where he debuted several products: a running shoe for Spanish shoemaker Camper, a cordless telephone and the latest model of the r5.5 wristwatch for Swiss watch manufacturer Rado, and —the last which is […]

Last September, during London’s design week, I travelled to Hackney in East London to visit Jasper Morrison at his studio and shop, where he debuted several products: a running shoe for Spanish shoemaker Camper, a cordless telephone and the latest model of the r5.5 wristwatch for Swiss watch manufacturer Rado, and —the last which is launching at the Maison & Objet fair in Paris on January 21 to 25, 2011 (it won’t be released to the North American market for some time). The three designs were on display at Morrison’s shop, alongside the designer’s second exhibition on trays from around the world. The shop is a space where you can see and buy Morrison’s wares as well as everyday objects that are beautiful and useful. 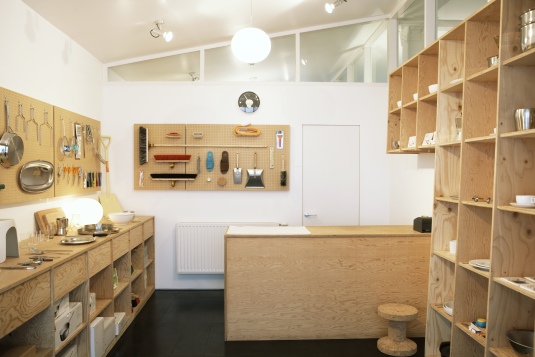 Paul Makovsky: What was the idea for doing this shop?

Jasper Morrison: There are only three people working here. Four if you count me. And I thought it would be nice to do something that would close the circle. Before we work with manufacturers, occasionally we meet shop people but we never meet the customers.

It’s so nice to have this connection with real people who like our things, it’s not meant as a venture to make money but it’s nice to be more open door.  And whenever we get a new product in, we can have it in the shop. That’s very nice.

PM: Are you only selling your own objects in your shop, or are you selling a mix of objects?

PM: And are you curating that, or is it the office?

JM: Different people. We travel, we see things, we take a picture.

PM: Is it all kind of taking the idea of supernormal, every day objects? 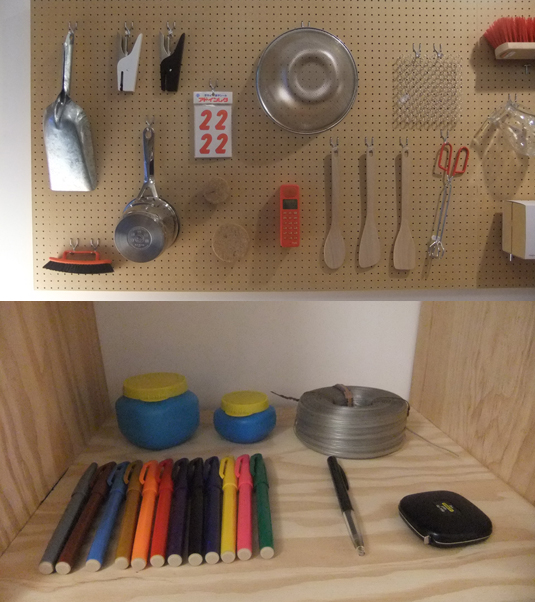 JM: We’re not strictly applying that, but yeah…

PM: Is this spoon by Sori Yanagi?

PM: It’s you? It has a feeling of being Yanagi.

JM: Yanagi is better than me. I’ll show you Yanagi. Let’s find something Yanagi. Hmmm. Where’s Yanagi? [looks around the shop and pulls out spoons by Yanagi]. His stuff is really subtle. The bigger one, you can see how subtle it is. He has more shape. But everything here in the shop, we are keeping one example of it, so later on, we’ll have a fantastic collection of everyday stuff. I noticed once at the V&A–the Victoria and Albert Museum–that they only collect the special examples of things, historically. Museums generally tend to focus on the rare, the exceptional, the made for the king kinds of objects. Only in archeological museums, do you find the real, everyday stuff.

PM: Or in the museums of early history, when they were doing the great sweep of history, where they would display everyday tools. Designers, or people who were interested in design, ignored that because they wanted designers with a name, I guess, as opposed to studying the evolution of the tool.

JM: Much of this stuff just won’t be here in 20 years’ time. That bucket… It’s Italian. One day, they’ll change the design, they’ll fuck it up, and then it won’t be there anymore. 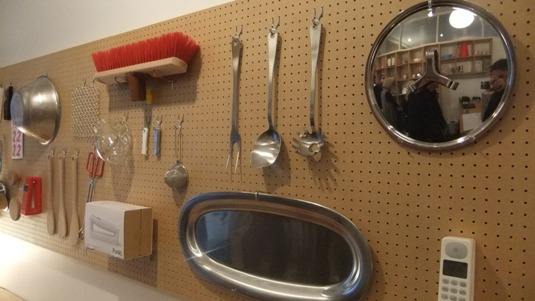 The serving utentils (in the middle of the picture) look like they are by Sori Yanagi but are by Morrison.

PM:  I just retuned from Norway, having visited different manufacturers and factories, and you had to pull the design out of them, because the manufacturers were making great things, but they didn’t seem so interested in globally launching their products. I found an amazing textile mill there that makes really beautiful, nubby wool fabric that supplies some of Kvadrat’s textiles. It’s interesting to find those kinds of places still making everyday things. And in a way, it’s a rarer experience because you have to track down this place, but to find that anonymously-designed bucket from Italy, in a way, is more difficult…

JM: We have a few of those buckets, but recently I realized that it’s so un-commercial to sell. I realized that if I see something nice, I just buy one of them. We stick it in the shop and no one ever buys it, but it makes a good picture in our monthly newsletter.

PM: And are you producing special things for the stores, like limited-edition things?

JM: No, not really. The new products like the telephone and the watch, we take in, so we’ll have three of the new ones being sold here.

(left) Morrison updated Camper’s first shoe that the company ever sold, the Camaleon, a practical shoe for Majorcan workers of the late 1920’s. Renamed the Country Trainer, Morrison transformed the functional nature and simplicity of the original model to a more contemporary and sporty shape.
(right) In 2009 Rado launched the r5.5, a collection of high-tech ceramics wristwatches designed by Morrison. The new watch comes with a combination of the grey metallic face and yellow chronograph counters.

PM: You do different exhibitions as well in the shop, like the current show on trays. Are these trays all anonymously designed?

JM: No, there are trays by designers like Ettore Sottsaas and Yanagi. That’s by a Japanese lacquer master, that’s another one from Okinawa. There’s a couple of mine… 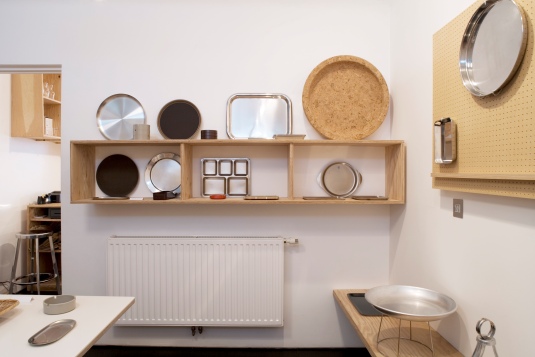 Trays from around the world.

PM: How are you sourcing some of these pieces? The anonymous ones must be hard to track down?

JM: I just buy them.

PM: So you just go to different stores?

JM:  I bought this change tray from an old French bar about 20 years ago. 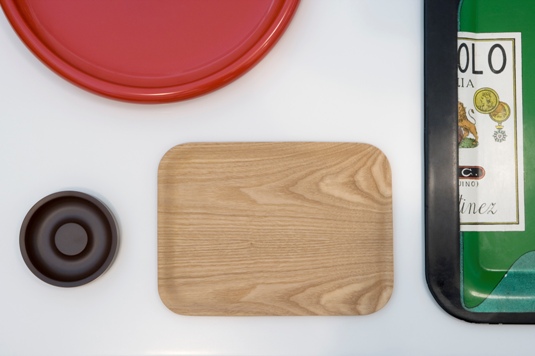 PM: How much time do you spend here in your studio and in Japan?

JM: Rather more in Japan. I come here, probably in the whole year, about a month, and spend maybe 3 months in Japan. And the rest is just traveling all over the place. I have a studio in Paris too.

PM: Those are three nice cities to work out of.

JM: It’s not very efficient, and we pay a lot more rent than anything, but I think we’re more productive that way. If we were all in one room, we wouldn’t be able to work. We’d be this way, that way….

PM: Why did you choose to open your studio in the east end of London?

JM: Well, we sort of drifted over this way. We were central, but rent went from reasonable to astronomical. So we moved over this way, we were in Hoxton Square, quite a small space, but nice. Finally I found this building for sale for a good price. I borrowed all the money, owe the bank a fortune, but we don’t have to move again.

PM: Do you work on different projects with the different offices?

JM: Yeah. I work with one designer on each project. I look at their skills and decide who I’m going to work it with. It’s very simple. 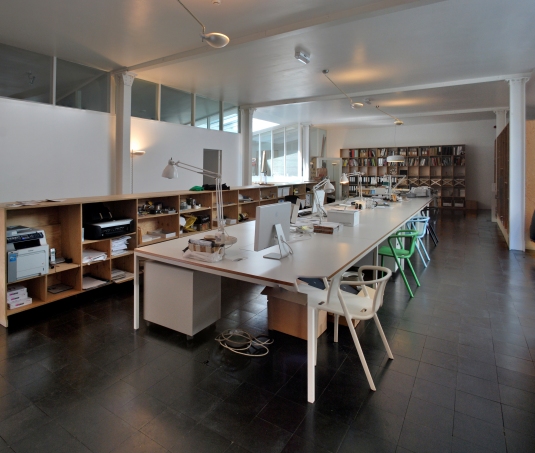 Workspace in the Jasper Morrison studio.

PM: How did you come up with the idea for your studio space?

JM: The concept for the space came from a friend of mine who was a partner at Herzog and de Meuron. I showed him the building, which was a ruin. We walked around for 20 minutes, then, without me saying anything, he said “you have to take out this part of the ground floor.” Originally it was totally landlocked and people came into the space through the passage. It was just horrible. So he took out this ground floor, and it created something like a public courtyard which is very nice.

PM: It has a very Italian feeling rather than an English feeling.

PM: Well, do the English really do courtyards? They’re more about… 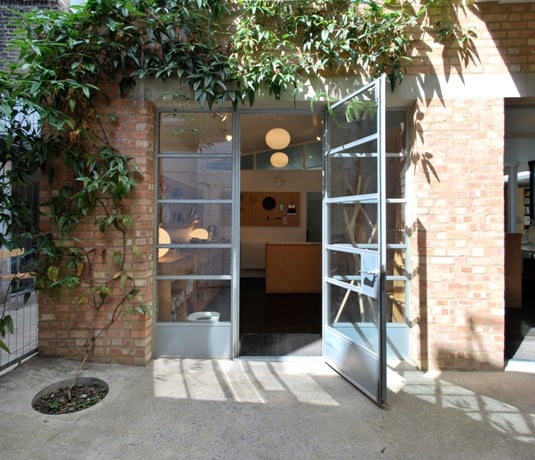 Exterior of the shop.

PM: What type of building was this before?

JM: A stable. The horses came through this hitch, and it was sort of a factory concept. –Do you want some tea? — The whole area behind the main building are factory buildings. And where the studio is now would have been the delivery department. They would have used the horses to take the carts and deliver stuff.

PM: It’s nice that it was always used as a utilitarian space. And then, is there an upstairs too?

PM: Ah, that’s nice to live above the office and the shop–a very 19th-century way of going back to your roots of making things.

JM: It’s quite strange, actually, because now when I come back to London, if I’m here for three or four days, it could be that I actually don’t leave the building, except for to buy some coffee or get some lunch.

PM:  Living and working in the same neighborhood, that’s very 19th-century of you. Next thing, you just have to grow your own food and you’ll be set.

JM: Not sure you can do that in this weather, but it’s great.

PM: I see you’re launching a new telephone by a Swiss company, Punkt.

JM: That’s their first product. The owner is Norwegian, and he came to see me. At first, I thought he was full of shit, but there was something about him that made me hold on. And he’s good.

PM: So you’re doing his phone. Are you doing other things with him as well?

JM: We have some new products lined up to come out next year at Milan, I think. 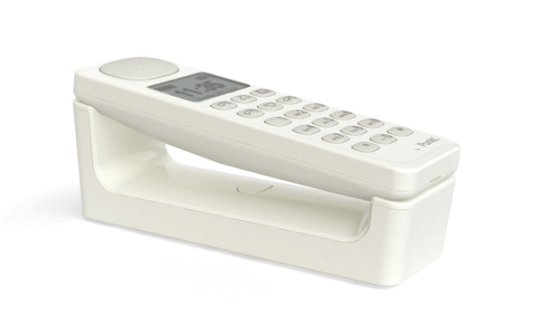 The handset of the cordless phone for Punkt, a new Swiss startup brand of consumer electronics, sits on a hammock-like base, allowing the user to read the screen and operate the phone without picking it up.

PM: And what else are you releasing soon?

JM: We have a big chair program for Vitra that launches at Orgatec. And I’ve got a show in at a shop in Kotrijk, Belgium that is like a prototype to a bigger show. We’re only showing the first pieces from the 1980’s. The idea is to show not too many pieces, but to have a lot of contexts–photographic pieces of the time and magazine articles and drawings and some texts and a slide show and to try to put it into historical context. 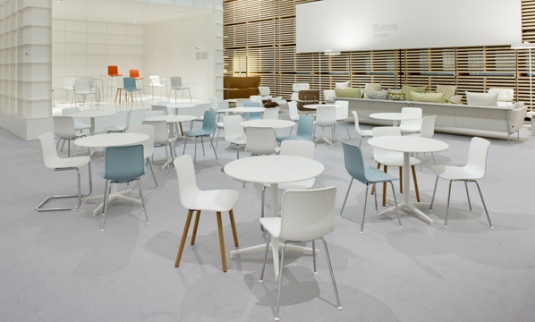 Morrison’s HAL chair and matching table is a new interpretation of the multifunctional shell chair, as well as a broad chair range with a distinct, contemporary look. The various bases and colors offer a wide range of combination possibilities.

PM: I remember looking at literature at the time, and people like Ron Arad and Tom Dixon were never referred to as designers, they were referred to as crafts makers and were you in that context as well?

JM: I was a bit different because from the beginning, I wanted to work in industry. I was never presenting myself as a maker. I had a small studio and quite early on, I was trying to make networks with industry or to get workshops to make my stuff and sell my stuff. No, I remember I avoided that label quite carefully.

PM: And is it a prototype for a bigger show?

JM: Yes, eventually, it will be. If anyone ever wants to do a retrospective that will be the basis on the whole thing.