John King, the estimable architecture and urban design critic at the San Francisco Chronicle, recently published his first book, Cityscape: San Francisco and Its Buildings. Based on a weekly feature that debuted in the Chronicle more than two years ago, the book is a nifty little hybrid: one part prose poem to the built environment, […]

John King, the estimable architecture and urban design critic at the San Francisco Chronicle, recently published his first book, Cityscape: San Francisco and Its Buildings. Based on a weekly feature that debuted in the Chronicle more than two years ago, the book is a nifty little hybrid: one part prose poem to the built environment, one part a walking tour of the city. The pocket-sized book, with accompanying photographs by the author, looks at fifty buildings. Recently I talked via-mail with King about the book, the role of background buildings, and the de Young Museum’s impact on the culture of San Francisco.

How did you select the buildings in the book?

It’s not enough for a building to be cool or historic or have the obligatory Victorian wrapping. The buildings ideally make a larger point: that they’re infused with larger aspects of our culture, or possess clues about how architecture relates to its surroundings. For instance: the first section of the book looks at Icons, and you won’t find City Hall or the Ferry Building. They’re both terrific, but what do I say after that? Instead there are buildings like the Lakeside Medical Center, a colonial-sci fi fusion from 1941 that shows how a single structure can serve as a neighborhood’s You Are Here marker.

What architectural qualities were you looking for?

I’m a style agnostic, to be honest. Just give me something that radiates conviction—a well-crafted building that puts its materials to good use, where you sense that the architect and/or client genuinely cared about the final result. These traits should be commonplace, but anyone who spends time in today’s America knows better.

How do you envision people using this book? Will they walk around the city with book in hand, or read through it and then search out the buildings?

My hope would be that “Cityscapes” would resonate with urbanists who have never even been to San Francisco. This city isn’t unique, topography aside; so much of what makes it memorable is the cumulative character of all these buildings jammed together, different scales and styles and reasons for being. And that’s true for any city with a rich structural heritage. That said, this book is intensely local. It’s not meant to be a guidebook—we didn’t even include a map—but I could imagine somebody reading it and then making a note to look for this or that building the next time they happened to be in a particular neighborhood. 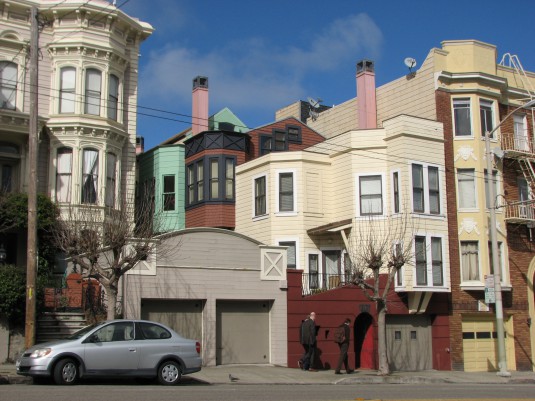 In A Visit from the Goon Squad, novelist Jennifer Egan refers to the “fibrillating excitement” that a work of art brings to one of the characters. An engaging building has something of this quality. In and of itself it might not be great, but it grabs your interest by way of how it embraces the street, or meets the sky, or adds a dimension in the cornice that you didn’t expect to see. Once you’re aware of that potential, you start wanting it in every building you encounter.

Many of the buildings in the book are good background buildings. Talk about their role in the urban fabric, especially in a city as rich and idiosyncratic as San Francisco.

One section of “Cityscapes” is called “Landscape” for precisely that reason: I wanted to look at the good buildings we tend to ignore, and explore what they add to our subliminal sense of our surroundings. Take a building like 77 New Montgomery St. It’s your basic early 20th Century brick commercial structure, nothing unusual at all, until you look closely in a certain light and realize that it seems to shimmer, because the line of white bricks around the windows are arranged in a zipper pattern called dentilation. The city is a mosaic with infinite variations on a theme, and the inevitable differences from one building to the next are what bring the composition alive.

You’ve been architecture critic of the Chronicle for more than a decade now. How have attitudes in the Bay Area changed?

In some way the changes here are par for the metropolitan course. The last spate of towers was largely in glass, and skin-deep historicism is the default in too many older, often upscale, districts. Still, there have been changes. The notion of verticality is much less threatening than it was a generation or even a decade ago. There’s also been a loosening-up of sorts; more and more neighborhoods and cities realize that you want to leave room for architectural trial and error rather than try in advance to prevent all conceivable ills. That’s a change from San Francisco in the 1980s and ’90s. The exciting thing is, enough good contemporary work has been added to the landscape in the last five years or so that there are now built examples of innovative architecture at varying scales. Someone who wants to advocate for fresh architecture and urbanism doesn’t have to pass around a dog-eared copy of Metropolis. There might be something equally riveting within a BART ride or 10-minute drive. 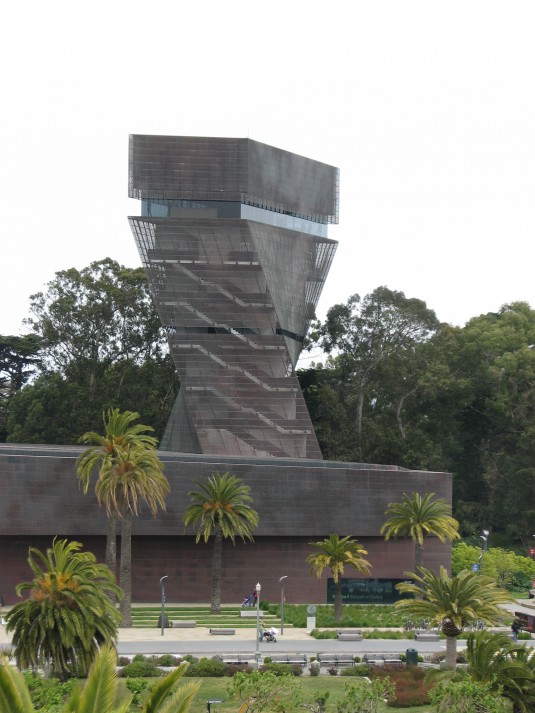 I wish I did. The de Young has left a wonderful mark. It’s easily the best of the big-name projects of the past decade, but there are still naysayers who resent that it exists, that it’s wrapped in copper, that its looks are hard to define. Modern has made headway. Challenging? That still pushes the local bar. What we have is a strange set of parallel worlds. In one there’s an expectation that prominent outsiders will shake things up. In another, plenty of taste arbiters—neighbors, politicians, planners—are happy to operate under the motto Context Uber Alles.