Over the course of a career spanning four decades, Rafael Viñoly has built a reputation as an architect’s architect, a serene functionalist and a master of institutional design. Schools, civic buildings, convention centers, and the like have long been the mainstay of Viñoly’s practice—but in just the last few years, the health-care industry has become […]

Over the course of a career spanning four decades, Rafael Viñoly has built a reputation as an architect’s architect, a serene functionalist and a master of institutional design. Schools, civic buildings, convention centers, and the like have long been the mainstay of Viñoly’s practice—but in just the last few years, the health-care industry has become his particular architectural demesne. With six innovative projects recently completed or currently underway, Viñoly has staked out a position in the advance guard of medical science, even as the state of the art changes from day to day with new discoveries and new breakthroughs. I caught up with Viñoly to ask how he keeps up.

There’s a lot of bad hospitals out there, design-wise and otherwise. What is your firm trying to do differently?

There are a couple of areas in which these buildings have really failed in the past: one is in terms of their ability to accommodate changes in technology and science; and two, in going beyond a decorative approach to really improve the experience of the researcher, the doctor, and the patient. I think that the problem is that it’s always been the area of a reduced number of specialties. You’ve seen the same thing with transportation, everything getting outsourced to large acronym firms. I think that architects have to challenge that. Having a more curious approach—that’s something we at least think we have.

So how do you find out how these facilities actually work?

We start by setting up an office in the hospital, and our team develops a day-to-day relationship with the people who work there. You need to be constantly addressing this question of how you make a group understand their relationship with the other groups in the overall fabric—and how their field is changing. Research is not something that ends when you put pencil to paper.

Sure. But once you put shovel to dirt, what can you do to keep the building up-to-date with all the changes the field is undergoing?

You need to be able to deal with the changing nature of the architectural envelope. With the new Stanford Hospital [set to open in 2015], the building is modular: a clover of four pods, that could be the beginning of the growth of other functions. It embraces a collaborative, random type of experience rather than a clear distinction between school and hospital. 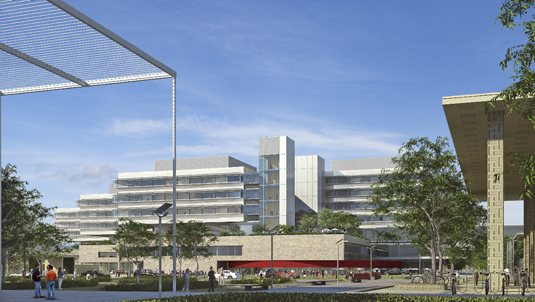 And if one of the collaborating groups objects to some element of the design…?

Well, when we originally designed the Van Andel Institute [in Michigan, in 1997], we had this idea that the lab areas could be in a space that was totally exposed to nature, so we did the first phase with a glass cover that was completely transparent. But from what we gathered from talking to the researchers, it was more important that they have light, rather than a view of the clouds—the view proved distracting. So in the Institute’s second phase [finished this fall], we fritted the glass. In general, the thing we hear from the scientists at Van Andel is that the basics—the sense of belonging to one single operation, not segregated areas—shouldn’t change. And that is true for most of the buildings that we’ve done.

All these details, all these groups to cater to—why bother doing health-care design at all?

You certainly don’t see too many “starchitects” working in this field. It’s non-glamorous—and I’m very interested in unglamorousness! People don’t understand how important this kind of thing is. If you remember ten, fifteen years ago, if you weren’t working on a museum you weren’t an architect. With hospitals, that level of snobbism would never have been applicable—nobody gives a royal screw about that stuff. We love buildings, but the problems here are beyond “buildings.”

.
Related: In 2007, we looked at Vinoly’s new research campus for the Howard Hughes Medical Institute, in northern Virginia. Last year, we revisited the cloverleaf hospital designs of the Chicago architect Bertrand Goldberg. The sustainable-design pioneer Gail Vittori recently talked to us about the challenges of green hospitals.