Q&A: The Energy of Jugaad

Many developing countries have highly developed cultures of making-do: ingenious strategies that help people work with the realities of economic disparity, growing populations, and rapidly developing cities that put constant pressure on scarce resources. Out of things like old oil tins and discarded car parts, people put together remarkably creative products. In Kenya they call […]

Many developing countries have highly developed cultures of making-do: ingenious strategies that help people work with the realities of economic disparity, growing populations, and rapidly developing cities that put constant pressure on scarce resources. Out of things like old oil tins and discarded car parts, people put together remarkably creative products. In Kenya they call it Jua Kali, in Brazil they call it Gambiarra. The word Indians use is Jugaad.

At the Centre for Architecture, New York, a pioneering exhibition called Jugaad Urbanism is taking a closer look at this rich culture of innovation in India. 22 projects, ranging from a smokeless stove to overhead pedestrian walkways, show how Indian citizens and designers are finding solutions for pressing urban issues.  I spoke to the curator of the exhibition, architect Kanu Agrawal, to find out why this kind of grassroots ingenuity might be important for us to look at, and what designers and architects can learn from it. 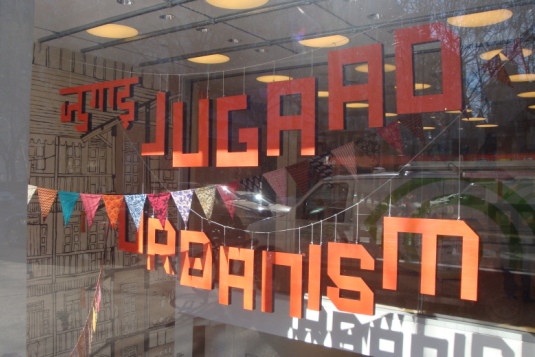 Avinash Rajagopal: Where did the idea of putting together the exhibition Jugaad Urbanism come from?

Kanu Agrawal: We had decided we wanted to do a show on Indian cities since they are changing rapidly, and we wanted to represent this urban growth.

The jugaad aspect emerged from looking at Indian cities that are often characterized by a “messy urbanism” but somehow work. Everyday people, workers, migrants, people at all levels of the social strata, are always “making-do”. I also thought that there was something relevant in the way they were coping and dealing with the world around them creatively on a daily basis with incredible energy – they were responding to their resource-constrained environment, the shortage of water, power cuts, density and so on. The jugaad attitude ranged from the scale of the kitchen stove to infrastructural projects.

Indian cities are often examined at a large scale by urban planners and represented in master plans and in urban proposals, but that scale and vision remains opaque to audiences and inhabitants alike. We wanted to “enter” the city, or read it, more at the ground level, and this jugaad energy seemed like a great way to do it. 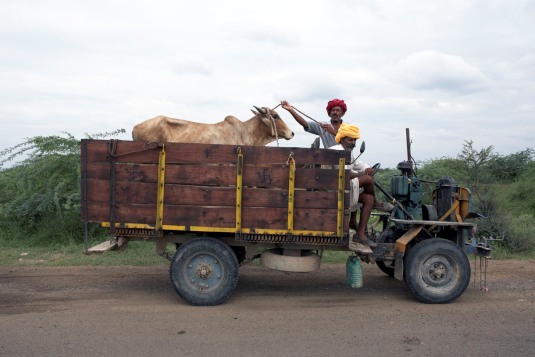 An example of jugaad: the engine of this vehicle is built entirely of spare parts. Photo: Rajesh Vora.

AR: How do you define jugaad? Why was it important to do an exhibition about this kind of design?

KA: Gayatri Spivak suggested that the word jugaad has the same etymological roots as yoga, to bring things together, and someone else said that it comes from the Sanskrit word, jugati, used in the Ramayana, to mean stratagem. So even historically there are differences, but they are not so far apart. One points to a kind of bricolage, and the other to a smart approach. Today, jugaad means different things to different people, but it is a clever, innovative fix.

There is an urgency about this kind of design, by the people and for the people, that addresses both the context and the change cities are going through. However, there are also moments of beauty and repose (such as the In-between Spaces proposal by Studio Mumbai or the bottle chandelier in Pondicherry, or the Jugaad canopy by Sanjeev Shankar) so it is not all about stress and shortage.

These design interventions are often accompanied by strong distribution networks or innovative financing strategies to make them possible. The economics of jugaad are often as important as the design of jugaad objects and spaces. 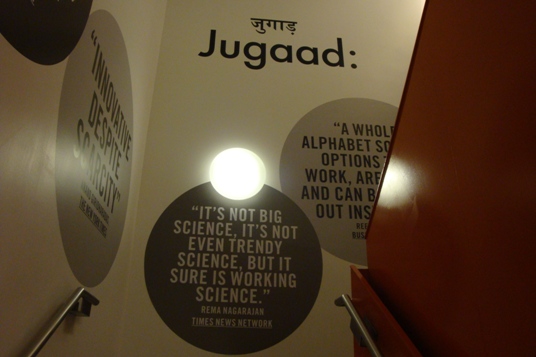 AR:The exhibition does a great job of documenting grassroots innovations, but you’ve also included mainstream design projects like the Tata Nano. How can the solutions that people find for themselves be useful to designers and architects?

KA: I think it inspires sociologists, architects, engineers, designers to work with maximum adaptability – to be reflexive and sensitive participants. So instead of a top-down approach or the reverse – there can be a series of multi lateral strategies. There are also lessons to be learnt of how to use resources most efficiently and economically, to invite families to be active participants in the making of their own neighborhoods, and to keep in mind the large scale impact of small interventions.

While I don’t think there is an exact translation of design by the people to the solutions by designers, jugaad strategies inform designers about the conditions and the potential of certain issues. Some provide ergonomic detail (chulhas, toilets), others offer rich cultural information that designers can incorporate. Others may also indicate areas where jugaad designs need improvement or the attention of designers, such as safety, sustainability, organization, and so on.

Some mainstream companies find that they can find models of constraint- based design as useful precedents for their own interventions and help distribute wealth as well. Beyond the Rs. 1 lakh ($2,200) price tag which became the driving force behind several design innovations in the Nano, the cars are also envisioned as a kit that can be distributed to local entrepreneurs, who can assemble them and sell them, since many parts of the Nano require only chemical adhesives instead of expensive welding. 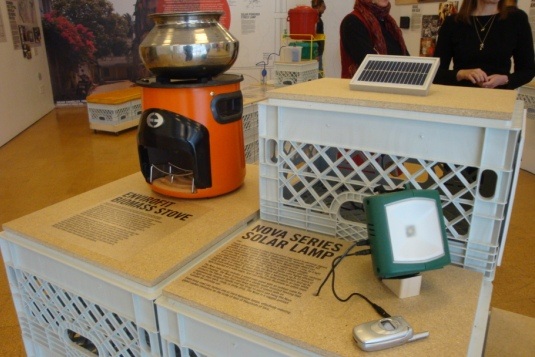 AR: Jugaad can no doubt be inspirational, but it is also often seen as temporary, make-shift design. What kind of long-term solutions can it provide?

KA: Jugaad solutions are inherently fluid. They are more like markers of urban conditions rather than final solutions. However, sometimes they emerge as elegant solutions because they come from people who grapple with issues on a daily basis – the city is truly their lab.

The long term solutions are in terms of the environment. Small interventions such as solar lighting or smokeless chulhas, or the use of urban debris and discarded materials to make building material from waste, can have a large impact in cleaning up the urban environment.

Jugaad also helps to rethink how to creatively use tight urban spaces, and with a growing population it helps to think ahead of such densities. It can make us think more carefully about scale, and urbanism as we know it, beyond mega projects to “infra” projects or works that explore the city as a series of different layers of urbanisms.

AR: Why do you think a small-scale, object-based approach might work better in solving India’s urban problems?

KA: I think there is a need for a sensitive and examined approach irrespective of scale.

Large scale projects do not take the various actors in the urban realm, their contributions or needs into consideration. Interventions such as the Commonwealth Games (in New Delhi) often seek to brush those details under the carpet for the sake of representation and beautification. Resettlements are planned without infrastructure or social structures, giving rise to serious problems. The Mumbai Skywalks, for example, can be useful if they can be better planned for safety and accessibility for older citizens and women.

A small scale approach should be given more attention because of its impact on people’s living conditions, and the long term affect on the environment. Chulhas, toilets, water filters, even the charkha (there is power in icons as well) are only some of the examples.

AR: How do you think this approach might have a larger global relevance?

KA: It can give more voice to people’s needs, rather than privilege only some groups and lobbies. This approach can also help people look in their backyards and streets and use their own jugaad sensibility to mobilize local energies.

Read more about the exhibition Jugaad Urbanism in our March 2011 issue. The exhibition is on view at the Center For Architecture, New York, until May 21, 2011.