Redefining Sustainability at the MUSE School

What is sustainable?  More to the point, what does the word mean when applied to a school? The MUSE school, founded by Suzy Cameron, offers some insight. The new campus in the Malibu hills opened with the help from Ecovations, a design firm that has re-envisioned the possibilities, indeed the very definition of sustainability. This […]

What is sustainable?  More to the point, what does the word mean when applied to a school? The MUSE school, founded by Suzy Cameron, offers some insight. The new campus in the Malibu hills opened with the help from Ecovations, a design firm that has re-envisioned the possibilities, indeed the very definition of sustainability. This is not an “expensive” or “faddish” place. At the Muse school, sustainable means healthy, integrative, and economically self-sufficient. The mission, according to Cameron, is to combine culture with sustainability and language and its name, Muse, which was her husband’s idea, epitomizes the philosophy of the school: inspiration.

While its primary goal is to educate children from Pre-K to 8, its edifying influence extends to everyone involved with the school: staff, teachers, parents, and even the community. All are involved in the school’s ongoing evolution. Indeed, many of the adults find that here they learn about the small and large interventions they can make in order to achieve a more healthy approach to living precisely because many of the MUSE strategies are inexpensive (composting and growing food), and can be practiced at home (drinking filtered water in glasses rather than buying bottles). 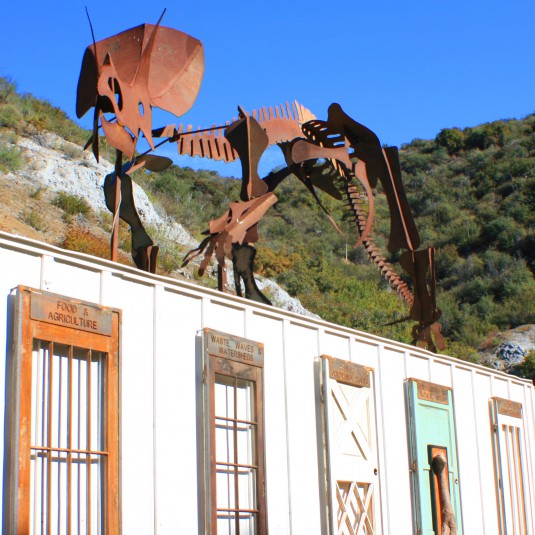 The design of the school itself is intentionally unobtrusive, blending into the hills rather than proclaiming its design pedigree. Yet every detail has been carefully considered and executed. The buildings are regulated through a computer system that monitors and adjusts energy use. The entire campus is a series of “smart” buildings. The zero-waste construction meant that the existing buildings were carefully dismantled and most of the materials reused; the remnants were carefully separated for recycling. As for temperature regulation, the Ecovations designers point out that when you enter a room, you should feel comfortable without noticing how the temperature is being regulated. Some elements, like the recycled steppingstones that document different geological eras, also serve as educational tools. 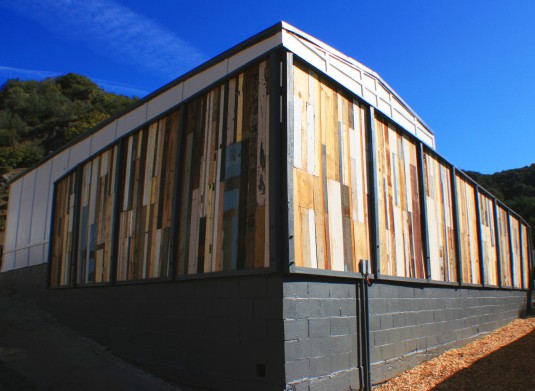 Touches like these reflect the fundamental belief that every opportunity must be taken to make tasks and activities serve multiple purposes–educate, explore, and nurture while simultaneously addressing practical needs like cooking, cleaning, and recycling. The designers and developers at Ecovations work with the teachers and the board to turn practical functions into educational venues. For example, on-campus composting also incorporates a series of edifying, art-based projects. Food preparation illustrates another example of combining practical tasks with teaching. Thus the students are given opportunities to learn about cultivating foods (some grown onsite, all are organic), preparation, and cleaning up. They learn to cook, then they learn about composting not just the leftovers but the napkins they use. Then there is the cleaning of dishes—no single-use plastic here. 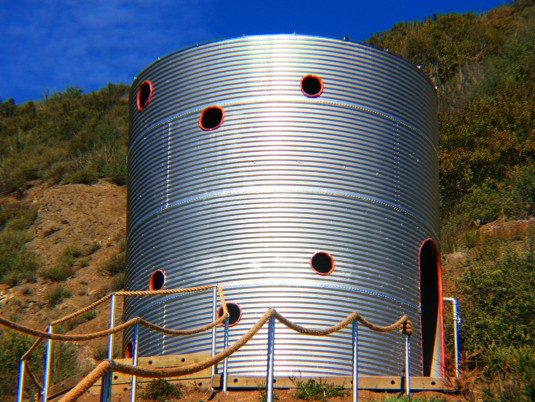 This comprehensive vision of culture, sustainability, and language extends beyond U.S. borders. According to Cameron, the Thai sister school located near the border of Myanmar is just the first of several planned international centers of learning. Here, the definition of sustainability encompasses the idea of harnessing and recycling physical resources and, as Cameron’s husband likes to point out, focuses on the idea of economic self-sufficiency. The students come from the local Thai population; others are refugees from neighboring Myanmar.

Just as the kids on the Malibu campus are taught to combine practical skills with more abstract lessons, the students at the Thai site learn such practical skills as animal husbandry, pig farming in particular. In this way the school, which was given fertile pigs to produce new piglets, teaches students the practical skills of taking care of animals, while also enabling the school to achieve economic self-sufficiency.

Other planned sites will include a school in China as well as one in Latin America. There the children will have an opportunity to learn about each other’s habits and communities through direct exchange with their sister schools, including proficiency in each other’s languages. These connections will prove, as studies have shown, that linguistic abilities strengthen cultural connections.