Metropolis editors reflect on the late photographer’s life and legacy.

The legendary architectural photographer Julius Shulman died last Wednesday, a few months shy of his 99th birthday. (Click here to view a slide show of his photos.) Here, three of Metropolis’s editors share their memories of the man and his work.

The first time I met Julius Shulman was at a lunch in his honor at the Four Seasons. He sat at the end of a long table of admirers (a position he relished) and held court. Ninety-two or ninety-three years old at the time, he was at least four decades older than everyone there and yet, in spirit, he was easily the youngest. Without too much prompting (maybe a half glass of wine), he launched into a series of stories, recalling houses and architects and images with a vividness and color that made me suspect that he was filling in a lot of the blanks or (more likely) telling well-told tales. It didn’t matter. He took such clear pleasure in recounting the past and reliving it for us live that no one could remain un-charmed. I certainly couldn’t. And though he was one of the most important architecture photographers of the 20th century, he was also something else, a true oddity: the Un-Tortured Great Artist. Here, clearly, was a happy man. Julius was a walking billboard for a life well-lived. And for the rest of us “kids” at the table, an object lesson: Do what you love and the rest (with a little luck) will follow.

I don’t know this for sure, but Shulman, whose loving photos popularized Modernist astringency and beauty, must have been dismayed by Post-Modernism, with its borrowed decorations and lack of aesthetic definition. I heard that the 1970 and ’80s were trying for him, yet he must also have found those years satisfying, when he saw a renewed interest in his beloved mid-century Modern architecture. Eventually the National Trust for Historic Preservation got interested in the style that sought to wipe out historic references. In fact, one of the Trust’s properties recently attracted Shulman, who was seen, two winters ago, shooting at the Philip Johnson estate, with its iconic hilltop Glass House in New Canaan, Connecticut. His persistent vision remains an inspiring legacy.

My first encounter with Julius Shulman’s work at Metropolis was years ago–in the garbage. One day I was emptying my wastepaper basket in a bin and at the top of the heap was Shulman’s letterhead and many pages with Shulman’s handwriting on yellow legal paper, which turned out to be reminiscences of his life and his work that someone had tossed out. “Is this what happens to architectural history?” I remember asking myself. But I guess at the time he was just another photographer, not the icon that he has become today.

Shulman’s almost photographic memory, his generosity with his time, and his entertaining stories always made for a good interview. You just had to turn on the tape recorder, ask a question or two, and sit back. The last time I interviewed him for the magazine, he ranted about how one publisher wanted to put together a book of his photos called the Dream Houses of L.A. He denounced the idea of a dream house and felt that Modernism had matured away from the idea of the glass box, believing that good architects today were moving beyond the architecture of Schindler and Neutra, creating imaginative roof-lines and capturing the environment in which the houses are built. Professorial in nature, he didn’t talk so much about the technical details of his photos, but of the social history of architecture and the many West Coast architects he championed. He pointed out architects whose work he felt was underappreciated or who had died too young, and suggested that I needed to pursue those subjects.

Shulman attributed his ability to photograph architecture as a blessing from God. “It’s uncanny in my life,” he said. “God knows what he’s doing, and I’m not a religious man, but, by golly, I sure believe in God, because how else would I be blessed with this ability to photograph architecture?” He meant it. The last time I saw him was last year, at a birthday party that was being thrown for him in New York. He was happy as always, and a bit nonplussed by all the attention. He invited me to come and stay with him in L.A., something he’d done every time we talked, and something I regret never doing. I miss him already. 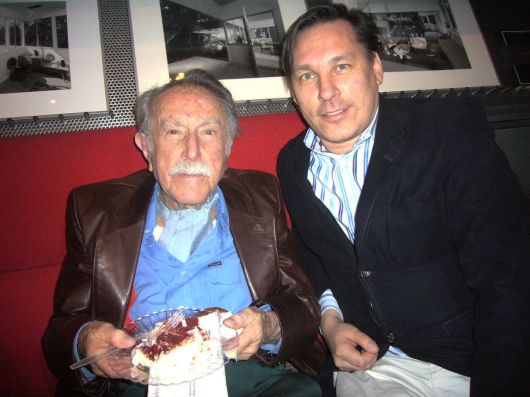