A narrow victory for Brutalism was scored on May 3, in Goshen, New York, as the Orange County Legislature rejected, 11 to 10, a proposal to demolish the Paul Rudolph-designed Orange County Government Center, built in 1967. The proposal, which had succeeded in two prior committees, would have replaced the much-hated complex with a neo-Georgian […]

A narrow victory for Brutalism was scored on May 3, in Goshen, New York, as the Orange County Legislature rejected, 11 to 10, a proposal to demolish the Paul Rudolph-designed Orange County Government Center, built in 1967. The proposal, which had succeeded in two prior committees, would have replaced the much-hated complex with a neo-Georgian structure. It’s unclear whether the vote reflects a sense of history or of financial rectitude. But with an architectural legacy as endangered as Brutalism, any success is to be valued.

I had the good fortune to see the Rudolph building for the first time last week, and I could not help but wonder: Have any of the disgruntled –those who called it “ugly,” “a monstrosity,” and “so out of place”—seen the county office buildings we have put up lately?  Have any of these critics ever been, even remotely, diverted by a DMV waiting room? In recent years, civic architecture has relentlessly inclined towards mediocrity or worse. County office buildings may be the worst of a bad lot, marooned between design competitions that occasionally produce state or federal buildings of distinction and the sort of local pride that seems to avert miserable town halls. These buildings seem to fall in an almost inevitable middle-range of civic apathy; you enter them only to renew a driver’s license and have about the same reaction to their aesthetics as when you see a distant relative at an occasional wedding.

Featureless modernist piles serving as county offices huddle in county seats across the country (typically behind historic courthouses) and this isn’t merely in post-industrial Ohio. Goshen, the seat of Orange County, lies some 50 miles northwest of New York City. Let’s look around the region.

To the south there’s Rockland county, and its county office complex. 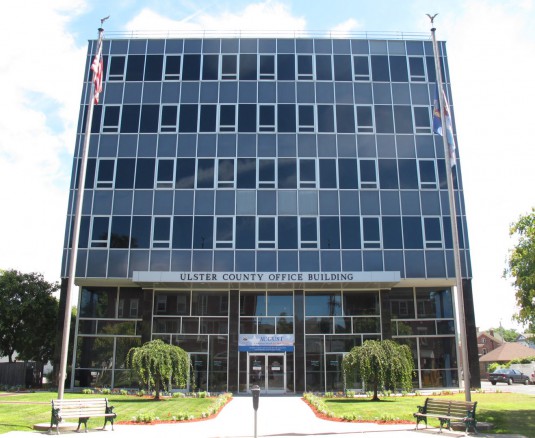 To the North, there’s Ulster County. 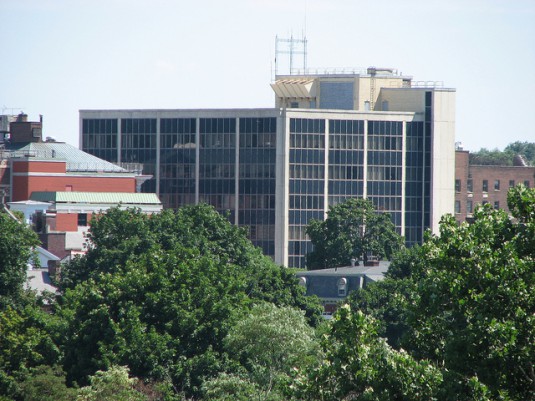 Across the Hudson, to the east, there’s Dutchess County, photo by richie 59 – flickr.com.

To the northwest, in Sullivan County, the most distinguished of this otherwise sorry lot (if comparing a building to the U.S. Department of Energy could be construed as a compliment).

The “monstrosity” that Orange County confronts is this: 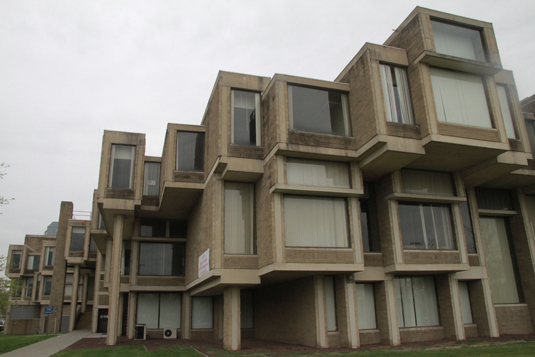 A lively debate raged over whether the costs of repairing and maintaining the building might prove lesser than the costs of replacement. No one denies that the structure, with 87 (count ‘em!) roofs, has been prone to water damage—it’s been closed since Hurricane Irene. And the interior looks like it’s difficult to heat.  Nevertheless, the County Executive’s argument that the costs would outweigh the estimated $85 million required to demolish the building and erect a replacement failed to convince the legislature. Recent reports also indicated that renovations of a similar Rudolph design, the library at the University of Massachusetts-Dartmouth, cost 24 million dollars less than the estimate for renovations on the Orange County Government Center. It’s hard to know what role these facts may have played in the vote, but they seem to have bolstered the case for preservation.

Financial calculations aside the building, if not quite loveable, is a fascinating one, and its preservation is a clear victory for our culture. Aside from its admittedly incongruous appearance in the generally historic community of Goshen, it’s entirely innocent of some of the worst traits attributed to Brutalist structures. It’s no hazard to the pedestrian environment, located as it is on a tract a few blocks removed from the town center and already removed from the street by an expansive lawn. At three stories high, it towers over nothing but its own parking lot, and is frankly difficult or impossible to see from most angles in the town center.

The principal view from the street is of terraced concrete outcroppings, a jutting canopy, and a slashing set of stairs — a texture that’s veritably windowless but unquestionably intriguing, visually. 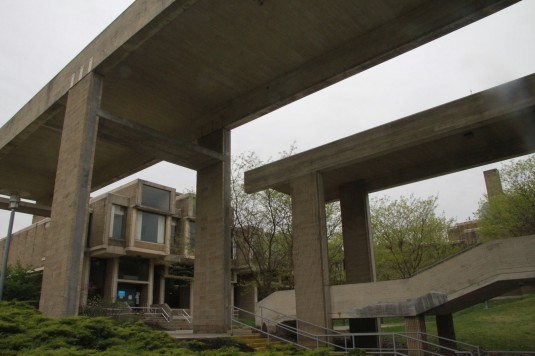 The most photographed angle, from the south, is a startling one; in sharp contrast to the street façade, a sea of window-pods surge forward, in a façade that seems to spill forth in its eagerness to meet the viewer (I like Brutalism! As you can tell). 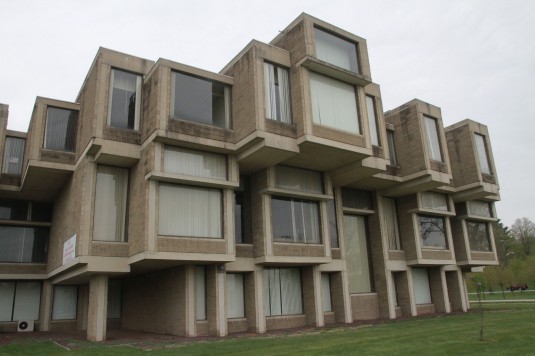 Regrettably, the entrance from the parking lot is marred by a service door, but once you’ve ascended a set of stairs, a chimney offers a welcome visual focus to the left, and the courtyard vantage to the right is almost bucolic. 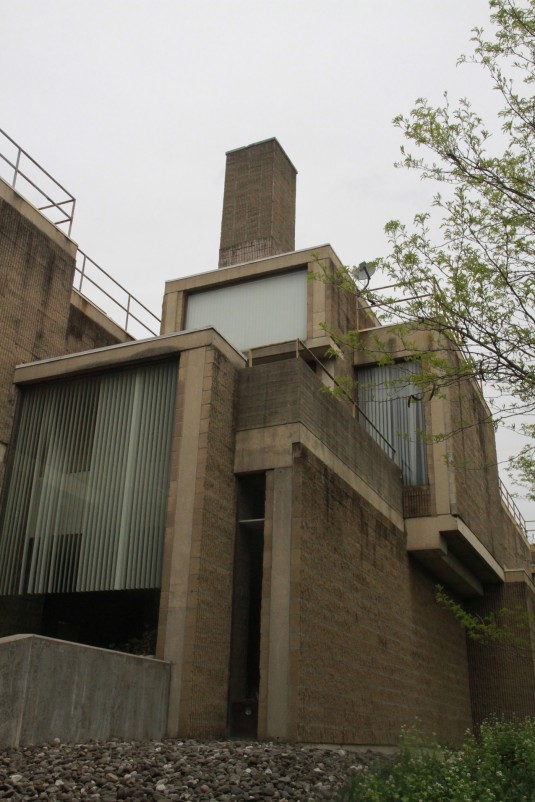 The north end is principally obscured from sight by a more recent and entirely unremarkable County Courts building addition.

Having completed this circuit we can return to the structure itself. It consists of three wings that surround a courtyard, with one ground floor breezeway (the aforementioned parking-lot entrance) interrupting its mass. A covered walkway frames most of the open 4th side. The formation, if more linear, is redolent of Rudolph’s theoretical underpinnings for the University of Massachusetts-Dartmouth campus that he described in an Architectural Review interview, “Its design started with Jefferson’s University of Virginia and his defined ‘lawn’ surrounded by pavilions connected with covered walks on two sides with the rotunda addressing the view on the opposite side. UVA’s ‘lawn’ is a spiraling space, defined by a series of connected buildings on opposites sides, with a narrowed entry at one end and an open-ended space at the other where the spiral becomes much larger.”

The narrowed entryway is similarly present in Goshen (the steps from the parking lot) as is the open end of the spiral, along the street side. Here, Rudolph’s intention was not to create a pedestrian space–much of the space is given over to a sloping lawn and rock garden–but the effect genuinely leavens its concrete surroundings. 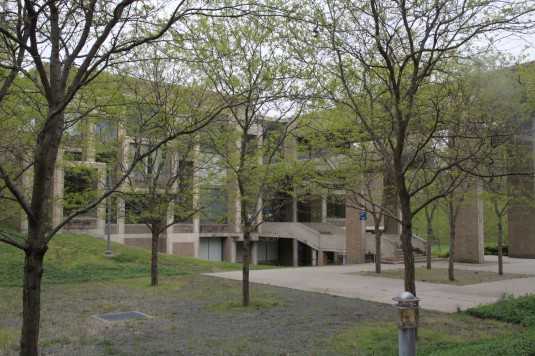 Upon entering the interior, I was surprised by how spacious and well illuminated it is. The offices were day lit, and the public spaces, such as the internal court holding the shuttered DMV desk at the base, while imposing, was at least spacious and geometrically satisfying. 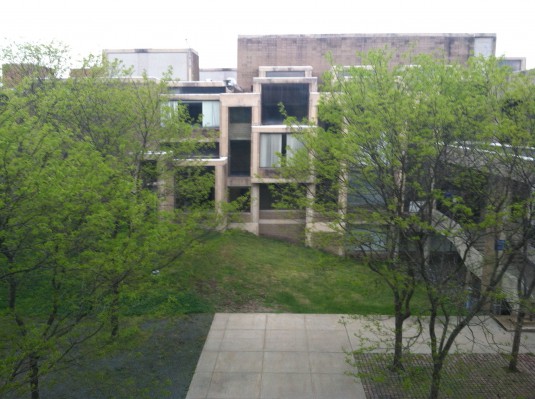 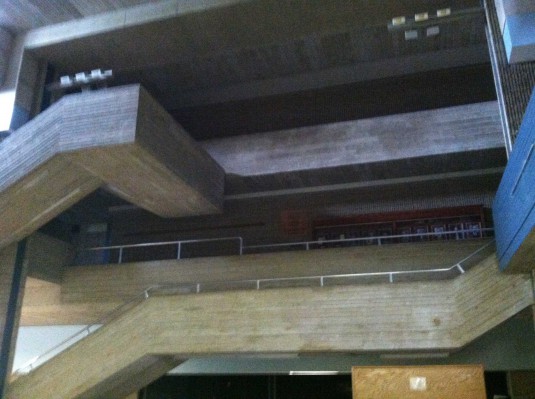 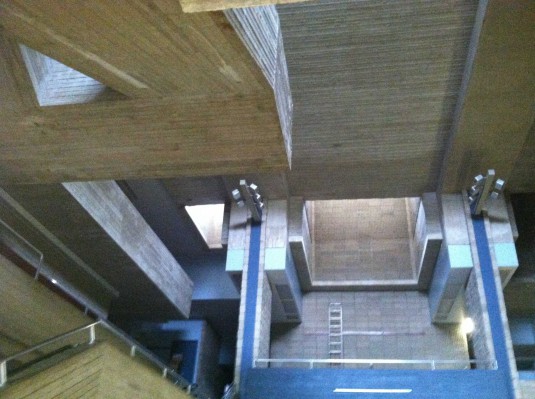 Some of the pro-preservation points made in recent commentary, including the New York Times entries in a debate on preserving Brutalism, “Art Deco Once Faced the Wrecker’s Ball,” seem absurdly glib. It’s impossible to imagine that Brutalism will ever be looked upon with the enthusiasm accorded to Art Deco, any more than that Webern will supplant Rossini in Best-of-Classical selections. Having said that, the architectural interest of the structure is impossible to deny. Given the poor fortune that Randolph’s work has suffered (I’ve never seen a prominent 20th century architect whose body of work has been so rapidly effaced by demolition), an interest in preserving our difficult past is a strong one. It stands, as Christopher Pryslopski wrote in the Hudson River Valley Review, as a tribute to the then-county executive’s notion “that Rudolph had achieved in concrete a metaphor for the progressive, open government that was replacing the outmoded Board of Supervisors with a Legislature.” Our present notions are different, but that’s no cause to discard the physical strivings of the past.

Some arguments for preservation, grounded in purely historical interest, seem to undersell the merits of Brutalist structures. There are unquestionably cases – I can think of several barren corridors in Washington D.C. where Brutalist architecture physically enjoins nothing so much as George Santayana’s oft quoted dictum, “Those who cannot remember the past are condemned to repeat it.” The Orange County Government Center is not one of these. Concerns over maintenance and usable floor plans aside, it seems to be among the more uplifting working atmospheres in a lower-level civic building category that I have ever seen. It’s definitely the most unusual and intriguing structure in the town itself. I’m profoundly glad that I won’t be among the last to see it.

Anthony Paletta is a writer living in Brooklyn. He has written for The Wall Street Journal, Bookforum, City Journal, and The Millions on urban policy, cinema, historic preservation, and literature, and Metropolis on fallout shelter design and Socialist automobility.