See it Split, See it Change, and See it All for the Price of a Subway Ticket

A subway ride that begins or ends at NYC’s South Ferry Station is soon to become a lesson in transcendence. On Tuesday morning I was able to preview “See it Split, See it Change,” a floor to ceiling glass tile installation illuminating the walls of the new station (which will open to public use later this month). Twin brother artists Mike and Doug Starn created the design, which features a network of trees curving along the walls of the station. The effect is organic, luminescent, and entirely Narnia-esque.

Inspired by the silhouettes of nearby Battery Park, the Starns worked in collaboration with the Munich-based glass company Franz Mayer. They developed a laser-printing technique that fuses layers of glass and ceramic frit to make the tiles, a process that results in a bewitchingly deep sense of color and light.

“A tree is a hierarchical form,” Doug Starn says, “but when silhouetted it becomes interconnected, the same as the transit system itself. That’s how we think of the city – interconnected, jumping from one place to the next.” On the early morning tour with a cup of coffee in my grasp in the early hours, I imagined such a space could bring the most grudging commuter to glory in the interconnectedness of it all. 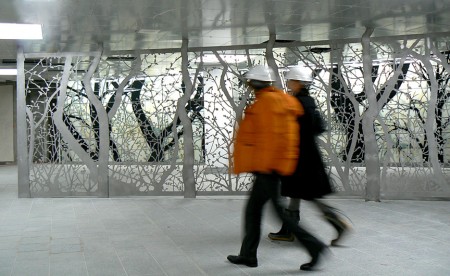 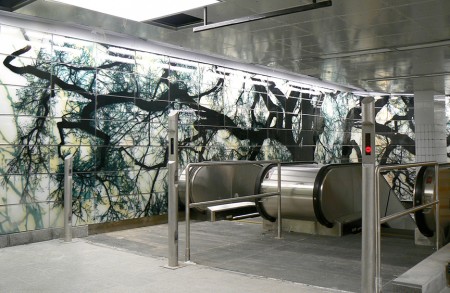 At the hub of lower Manhattan, the new station offers a distinct sense of place due to the artists and the Metropolitan Transportation Authority’s (MTA) Arts for Transit initiative. In the center stairwell, a topographical map from the 1640s has been overlayed with a contemporary street grid and applied to the wall using an ancient Roman mosaic technique (which the Starns researched in Pompeii specifically for the project). Another relic reminding us of a past Manhattan is a section of an eighteenth-century battery wall, excavated during construction and worked into one of the walls, separate from the Starns’ installation. 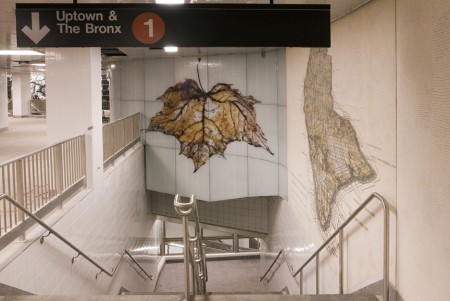 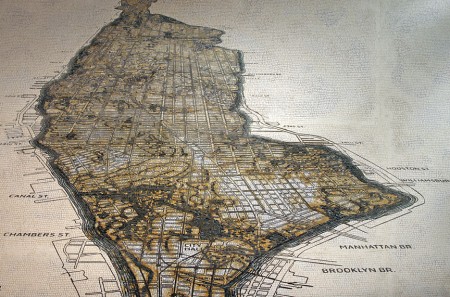 A close-up of the Starns’ mosaic
(Photo: Rob Wilson)

Naysayers could find the entire project overblown while currently on the verge of yet another MTA fare hike. But the construction of the new station, a $530 million project (of which the commisioned artworks cost $1 million), is funded from a $4.55 billion federal investment towards the reconstruction of lower Manhattan following 9/11. The original South Ferry Station, which is still in operation, was damaged in the attacks but has long been in need of restoration. The new station links the now separate subway lines and addresses a number of much needed technical updates.