One reason the U.S. government has been pushing for home ownership is because it’s said to reduce turnover and build strong communities. But, as I learned on a recent trip to Hong Kong, there may be other ways to get there. Some background might be helpful here: In many Asian countries, commercial building landlords don’t […]

One reason the U.S. government has been pushing for home ownership is because it’s said to reduce turnover and build strong communities. But, as I learned on a recent trip to Hong Kong, there may be other ways to get there.

Some background might be helpful here: In many Asian countries, commercial building landlords don’t finance tenant improvement allowances (the cost of paying for an office or retail tenant to customize their space), the way most do here. Leases are relatively short (often three years, vs our customary five to 10) but tenants tend to stay if the rents are reasonable, after all, they have invested in (and effectively own) an immoveable piece of the asset.

In Hong Kong, as I learned, subsidized housing works in much the same way. Thirty percent of the population lives in government subsidized housing–”Housing Estates”– as they are called. These units are rented out as bare shells. The apartments are essentially concrete boxes with only a skim coat of plaster (and plumbing conduit running on the outside of the building). As a result, the units are less prone to damage and can be more easily cleaned up when tenants change.

When I think of the degradation of finishes in many affordable housing projects here in the U.S., and the cost created by trying to make them indestructible, the “shell only” model seems like a brilliant solution.

But what really reduces tenant changeover costs is the infrequency of tenant changeovers. Once a family is assigned to a unit, they can’t switch for another one unless their circumstances change dramatically. In compact, rail-connected Hong Kong, a change of job, for instance, doesn’t seem to call for a move. 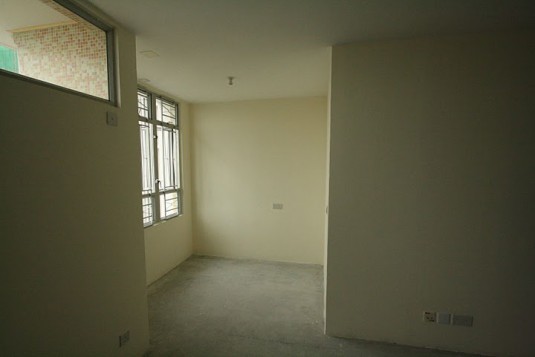 The interiors of a unit in the Ching Ho tower. photo: Katlin Jackson.

Another reason people stay put is that they, like the corporate tenants in commercial space, own their finishes. Their investment in flooring, cabinetry, appliances, light fixtures, and air-conditioning units tends to connect them to their vertical community better than our subsidized housing projects do. Many stay in the unit they were first assigned for the rest of their lives. In contrast, even in our market-rate apartments, it’s typical for 50 to 75% of all tenants to move on within one year.

This Hong Kong experience with affordable leases showed me that there is more than one way to build lasting assets and strong communities around them. Give people an affordable box with running water, a toilet, and a sink. Let them customize it. Let them own their investment in their interiors.

In the end, this approach may be a tremendous lever–an important alternative to home ownership–to align renters in a fundamental way with the success of their communities.

A. P. Hurd is a Vice President at Touchstone Corporation in Seattle, and an Affiliate Fellow of the Runstad Center for Real Estate Studies in the College of Built Environments at the University of Washington. The interdisciplinary group of Fellows recently returned from a research trip to Hong Kong. Read more about their findings on their blog