For years, New York City’s electricity grid has strained under the stress caused by peak demand, the times (like midday or, in a seasonal cycle, the summer) when residents are most apt to use electrical appliances and max out the municipal power network. Stress on the aging system will likely only increase in coming years, […]

For years, New York City’s electricity grid has strained under the stress caused by peak demand, the times (like midday or, in a seasonal cycle, the summer) when residents are most apt to use electrical appliances and max out the municipal power network. Stress on the aging system will likely only increase in coming years, with some experts predicting a 30 percent uptick in the city’s peak demand by 2030. One strategy to deal with the problem, addressed by a panel on “Smart Grid for Smart Cities” yesterday morning at New York University’s Rudin Center for Transportation Policy & Management, is the creation of a more flexible energy system–one that allows customers to know exactly how much energy they’re using and lets them reduce their load (by, for instance, shutting off their water heaters when they’re not home). For city residents, that will mean smaller energy bills at the end of the month. Other features of the smart grid—like the storage of electricity, harvested during lulls and used during times of peak demand—also increase the reliability and cost-effectiveness of the system, while reducing its environmental impact. 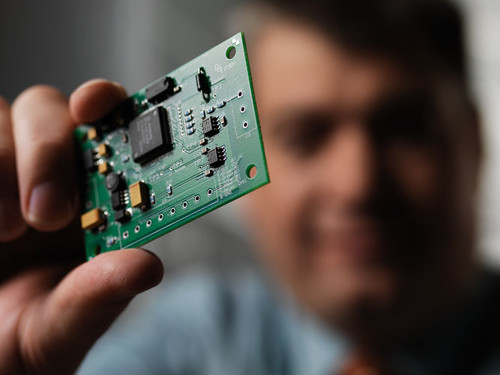 Sensors like this one can shut off appliances when the electricity grid is under stress (read more here). Photo: courtesy Pacific Northwest National Laboratory

All good ideas—but, of course, not without their drawbacks.  Smart grids have been experimented with in places like Colorado, California, and even northwest Queens, but most American versions are still in their trial phases and some necessary technology, like that ensuring cheap electricity storage, has yet to be refined. Moreover, the biggest hurdle may be a financial one: laying out the infrastructure to make a smart grid work requires significant capital investments to provide for, among other things, smart-energy meters (to communicate real-time energy use for individual households) and Wi-Fi service (to transmit this information within the network). New York’s topography, with its skyscrapers and city “valleys,” can cause problems for Wi-Fi, and the fact that most existing power infrastructure runs underground makes smart-grid implementation costly. Given the city’s current fiscal straits, it’s hard to see where the money will come from. Which means that any politician serious about developing a smart-energy system will have to confront a seriously unpleasant (and, let’s face it, unlikely) political task: short-term sacrifice for long-term payoff.
.

Related: In our What’s Next issue, IBM’s Jane Snowdon described a promising smart-grid partnership in the Pacific Northwest. Last December, the Segway inventor Dean Kamen talked to us about the smart grid: “I think more than making it smart we have to put things that are smart on it.”