Photo: Stefano Paltera/courtesy the U.S. Department of Energy Solar Decathlon Keeping tabs on the Solar Decathlon is a bit like watching a slow-moving golf tournament. Over two weeks, 20 college and university teams from around the world compete to see who has created the best residential prototype for a solar-powered home. The houses—installed in a […]

Keeping tabs on the Solar Decathlon is a bit like watching a slow-moving golf tournament. Over two weeks, 20 college and university teams from around the world compete to see who has created the best residential prototype for a solar-powered home. The houses—installed in a Solar Village on the National Mall in D.C.—are judged on ten criteria ranging from architecture and lighting design to communications and net metering. The daily tallies are kept on a giant leaderboard as well as on the Decathlon Web site.

Last Thursday, as the competition was nearing a close, the house from Team California held the top slot after coming in first in the architecture competition. But by the end of the day, the University of Illinois at Urbana-Champaign had bumped California from first place with just one final contest to go: net metering. Each home is equipped with a meter to gauge how much energy it produces and consumes; a team gets 100 points for producing at least as much energy as their home needs and they get up to 50 points for generating a surplus that could go back to an energy grid. 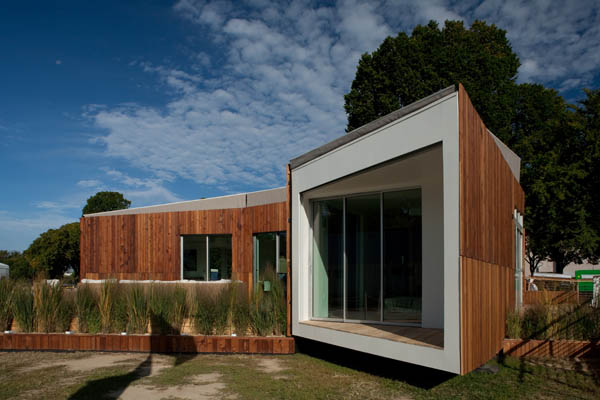 Germany, it would seem, is the Tiger Woods of this tournament. Down by a few strokes with one hole to go, the Germans hit a hole-in-one. Their cubist design earned the only perfect score on net metering, edging a win over Illinois by ten points to take first place for the second time in a row.

I headed down on Saturday, a day when there was nothing “solar” about this decathlon. A pall of cold, gray weather descended on the mid-Atlantic and D.C. was shrouded in clouds for days. White plastic mats lined the pathways to the houses, and geysers of muddy water shot up onto your legs as you as dodged in and out of the umbrella-wielding crowd. And there was a crowd. Somehow I thought the terrible weather would cut down on attendance, but not so. 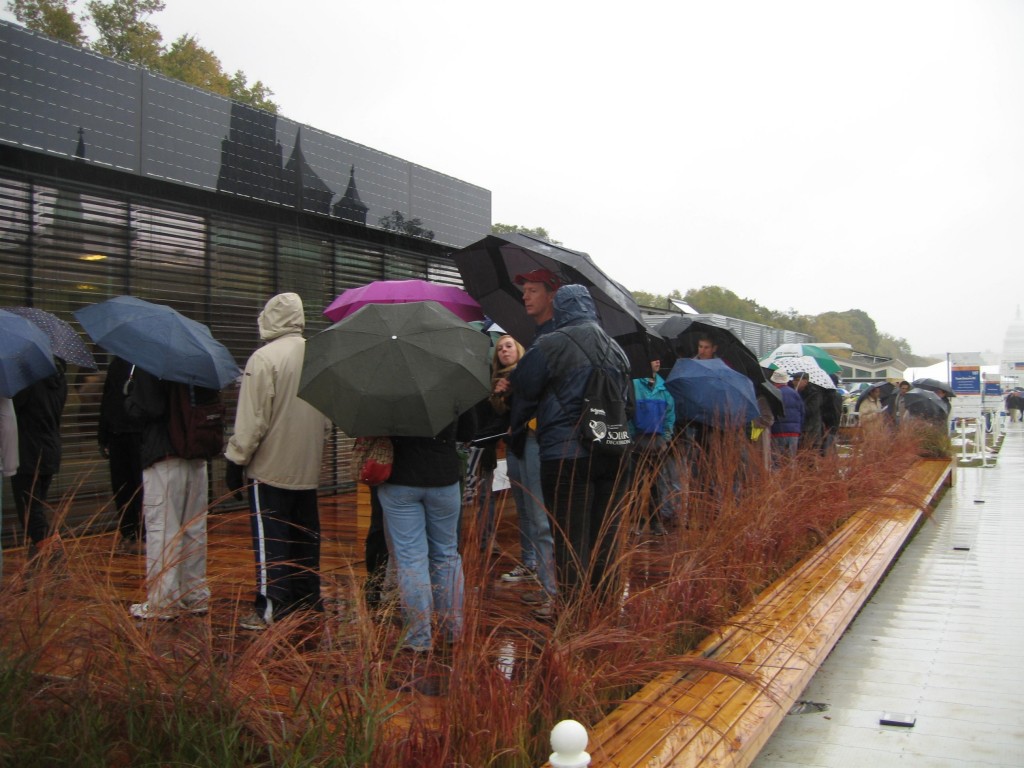 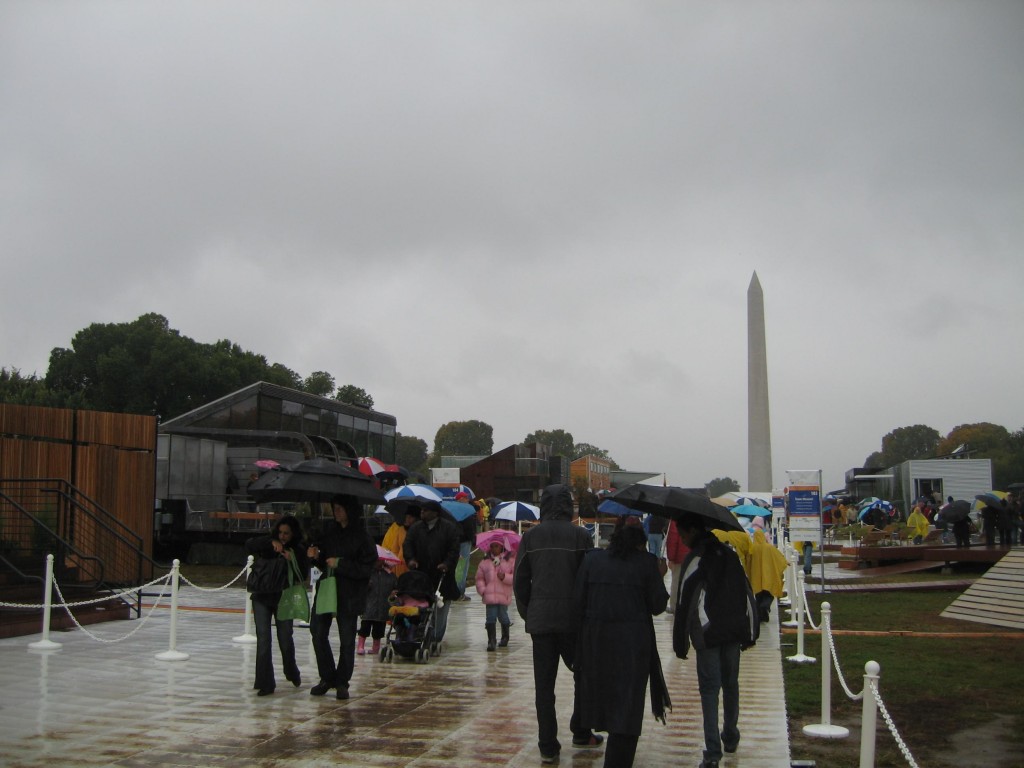 I met up with David Weightman a professor of industrial design in Illinois’s School of Art and Design. Weightman and I first met at a design research conference in Chicago last fall, where he told me about the early stages of their Decathlon entry. Now, the house is flooded with visitors and the team is too busy giving tours to the public to dwell on their eleventh-hour slide into second place. (Weightman flew back in from Illinois when the team hit first place on Thursday.)

After speaking with several of the Decathlon participants, I learned that size really does matter—and bigger, in this case, was definitely better. Team Germany focused on the solar technology of their façade, using an 11.1-kW photovoltaic (PV) system made of 40 single-crystal silicon panels on the roof and nearly 250 thin-film copper indium gallium diselenide (CIGS) panels on the sides. They anticipated that the system might generate up to 200 percent of the energy needed for the house, and they knew the CIGS component worked particularly well in cloudy weather, which came in handy when a Noreaster parked itself over the nation’s capital. The Germans said their approach was to “push the envelope with as many new technologies as possible”—and their shiny black modernist cube reflected that philosophy. 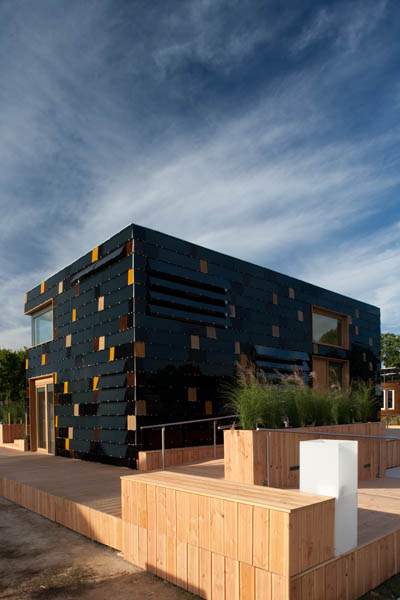 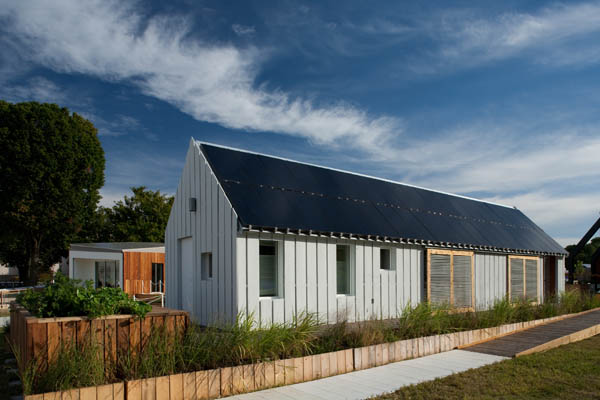 Illinois, on the other hand, broke from the architectural direction of most entrants. When schools set out to test the limits of energy efficiency, there is often a desire to make something cutting-edge look cutting-edge. Illinois built to Passive House standards but channeled the vernacular of the Midwest with a traditional gabled architecture. The façade is fabricated of reclaimed wood from a barn belonging to one of the students. “The skin has meaning,” Weightman says. “It came from a place and it will go back to that place.”

Illinois hoped to show that there doesn’t need to be a division between new technologies and traditional design. The team did not get the highest marks for architecture. Still, there is something to be said for the vernacular approach. If the ultimate goal here is to inculcate energy efficiency into the mass marketplace, it may be good to remember the aesthetic tastes of the everyman. Not everyone wants their living environment to scream its intent; most just want it to feel like home.

There are many measurements that are not judged in the Solar Decathlon. Storm water management, for instance, or overall carbon footprint. There is also something to be said for cost. The Germans fell into the $850,000 cost group; Illinois came in around $300,000. One judging category that needs to be introduced in the future is Bang for Your Buck.