In his 2007 book The Nine: Inside the Secret World of the Supreme Court, Jeffrey Toobin begins with a description of a staircase. Cass Gilbert, the architect of the U.S. Supreme Court building, wanted to articulate the importance of the decision-making that would happen inside the chambers of this new civic structure, and he did so with an exterior solution: a steep set of marble steps leading to a row of Corinthian columns. For this, his last commission (he died before it was complete), the architect who championed the skyscraper returned to classical design.

“Gilbert pushed back the wings of the building, so that the public face…would be a portico with a massive and imposing stairway,” Toobin writes. “Visitors would not have to walk a long distance to enter, but few would forget the experience of mounting those forty-four steps to the double row of eight massive columns supporting the roof. The walk up the stairs would be the central symbolic experience of the Supreme Court, a physical manifestation of the American march to justice.” 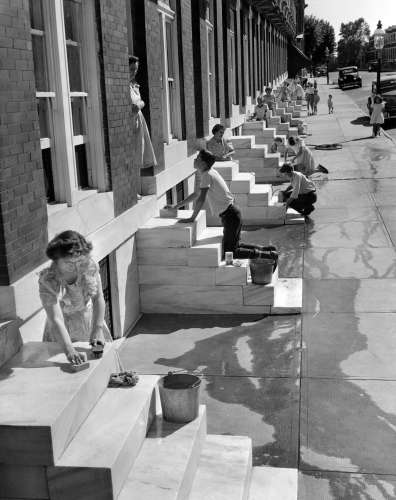 This got me thinking about the symbolic role that stairs play in architecture—from the triumphant fist pump of Rocky on the steps of the Philadelphia Museum of Art to the front stoop moments honored in the writings of Jane Jacobs and the photography of A. Aubrey Bodine, pictured above. Now you can add another set of steps to the list: the ones at Coop Himmelb(l)au’s High School #9. 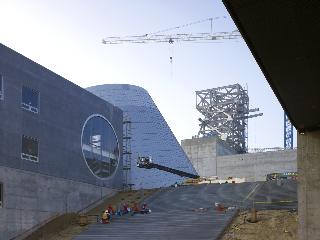 The stairs under construction. The large circular structure is the library building.

High School # 9, part of the largest public school infrastructure building program in the country, is set to open this fall in downtown Los Angeles. It’s sited near cultural institutions like Disney Hall and the Museum of Contemporary Art on a perch above the famously busy Hollywood Freeway.

When the firm’s co-founder Wolf D. Prix visited the site in February, he led guests to his favorite sight line, the student drop-off area. The high school sits on a steep urban plot, with a dramatic staircase leading from a circular drive, up to the main courtyard of the campus. It feels monumental as you ascend those steps, looking up at the sculptural school library and theater complex, and this is due in no small part to Prix’s desire to make a statement about the need for public education in our culture. At a time when upwards of 50% of city public school students fail to graduate high school, when schools lack funds for basic resources let alone thoughtful architecture, the idea of a kid taking these steps to class each day seems important. It’s a powerful and timely visual reminder of the role that education must play in our country’s future. 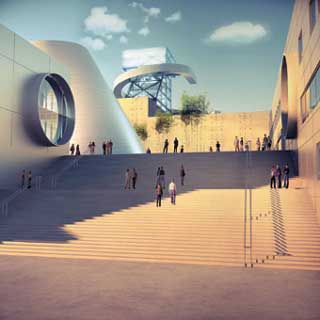