Still Modern After All These Years

Groups of 1950-ish Modernist buildings usually mean Corbusian-style autotopias of heroic proportions (New York’s Empire State Plaza in Albany comes to mind). Plymouth Circle on Madison, Wisconsin’s leafy west side proves the opposite. Here, perched above a sea of generic bi-levels is a collection of, can we say “nifty”, yet modest, Mid-Century Modern homes with […]

Groups of 1950-ish Modernist buildings usually mean Corbusian-style autotopias of heroic proportions (New York’s Empire State Plaza in Albany comes to mind). Plymouth Circle on Madison, Wisconsin’s leafy west side proves the opposite. Here, perched above a sea of generic bi-levels is a collection of, can we say “nifty”, yet modest, Mid-Century Modern homes with a distinctively local pedigree. More than just a collection of rare houses, the neighborhood represents something almost existential: a decades-ago marriage of enlightened consumerism and environmental ethics. So is this suburbanism as it was always meant to be–light on the land, lighter still on the ranch dressing? 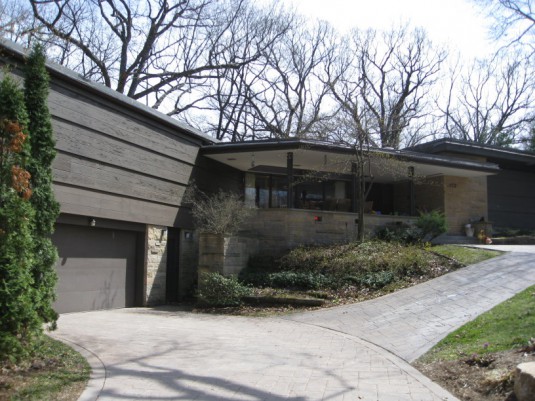 The houses, some 35 of them in all, were built between 1952 and 1959. Most are roughly 1,200 square feet in size. The project was the brainchild of a high-minded land speculator of whom very little is known today except that he had a thing for modern architecture and what has lately become known as context-sensitive design. Instead of the houses being isolated in space, as with so many other specimens of the genre, they are etched snugly into small wooded lots creating a green-fringed gallery of styles ranging from neo-Prairie to Bauhaus-inspired ranchettes. Deed restrictions were placed on the lots mandating contemporary design and the preservation of prominent land features.

The neighborhood stands as a synthesis of the converging philosophies on architecture and the natural world that had coalesced in central Wisconsin during the early to mid 1950s. Many of these ideals were embodied in the work of famed area denizen Frank Lloyd Wright himself. This was the tail end of Wright’s Usonian period and its celebration of the ascetic. It was also the early beginnings of America’s first environmental movement many of whose forbearers, including the naturalists John Muir, Aldo Leopold, and Senator Gaylord Nelson, all had a strong connection to the area. Together, they exerted a major influence in shaping a local land ethic that the neighborhood strongly channels. 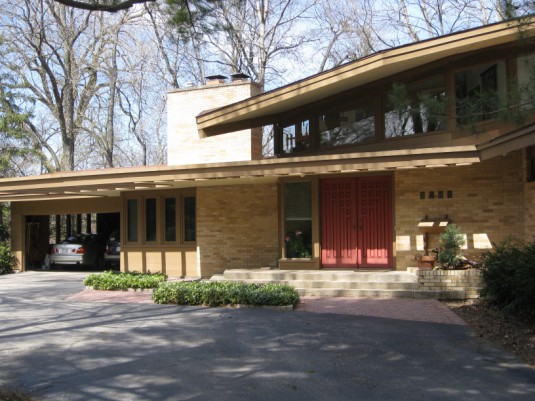 Although Wright himself had no direct involvement with Plymouth Circle, many of the homes were designed by several of his student-apprentices at his nearby studio in Spring Green, WI. And while none of them ever attained the same level of renown as other Wright disciples, a few did become recognized as main stalwarts of the Wrightian style.

So why should we care about this place now? Well, for one it disproves that front porches are a prerequisite for neighborhood conviviality as some in the planning world seem to think. Here, it seems, social capital is reflected in subdued expressions of shared values rather than through affected, smiley-faced architecture. The Priuses (yes, there are many) are discreetly parked under carports or in underground “bat-cave” garages.

Second, the homes debunk the notion that the entire post-war suburban landscape, much of it now endangered through age and poverty, is all scorched-earth architecturally speaking. The stylings of these particular houses gave rise to a regional vernacular aesthetic that, bastardized though it has been, still exerts a strong influence among local architects and tastemakers. The same probably can be said of much surviving California Modernism. 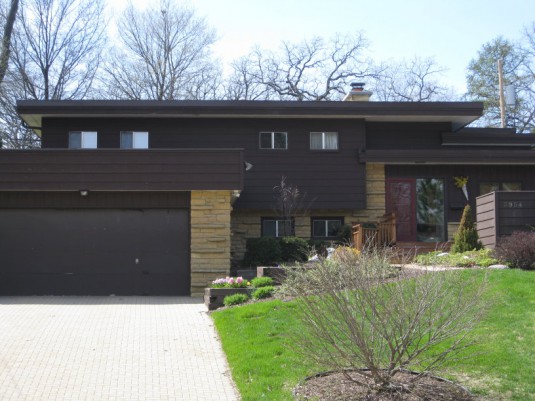 Finally, the neighborhood represents an early model of green construction when that meant a general sympathy to the land and before today’s obsession with materials and technologies. Plymouth Circle reminds us that some of the most basic green design principals are also some of the simplest and least expensive ones.

As much a cultural timepiece as architectural curio, Plymouth Circle was built at a moment when a few began to think differently about their lifestyles, consumption behavior, and the environment. Times not unlike our own. So could it stand-up as a model for suburban living in the post recession era? “The New Suburbanism” anyone?

Greg Flisram is a Wisconsin-based planning consultant and writer specializing in urban revitalization and redevelopment. He is a Principal-Affliate with the Kendig Keast Collaborative in Chicago and has worked on urban regeneration projects throughout the U.S. He can be reached on Facebook or at [email protected]