STUDIOS Architecture and partners talk about the radical changes in today’s workplace.

For the past two years Metropolis’s publisher and editor in chief Susan S. Szenasy has been moderating a series of discussions with industry leaders on key issues surrounding human-centered design. On June 1, 2016 she facilitated a panel in the newly built Washington D.C. offices for the Urban Land Institute, designed by STUDIOS Architecture, and discussed the challenges in designing a workplace that actively supports the mission of the organization. What follows is an edited transcript of the conversation. 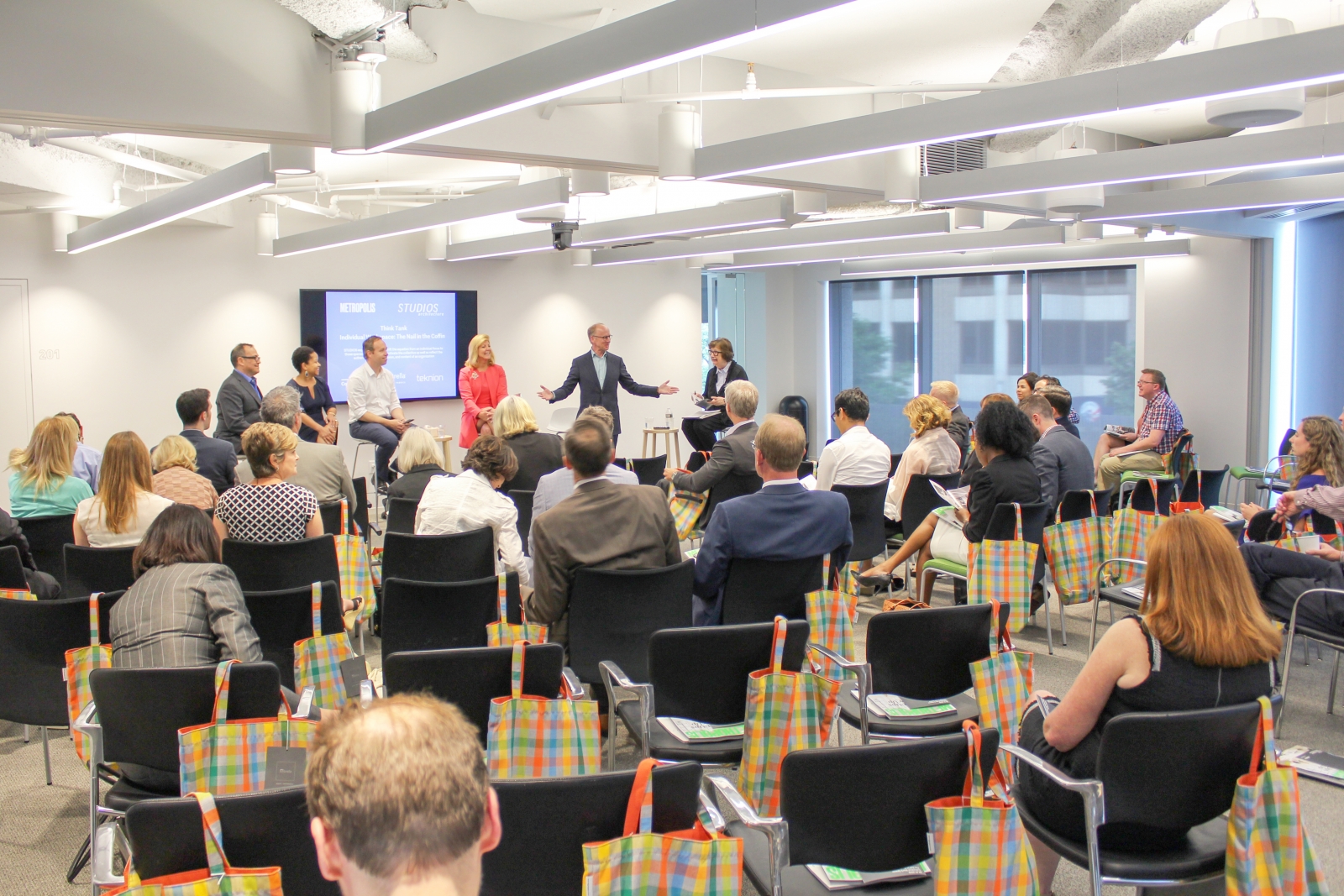 Susan S. Szenasy, publisher/editor in chief, Metropolis magazine (SSS): Patrick, your organization just moved into the space a week ago. Can you tell us about ULI’s mission?

Patrick Phillips, global chief executive officer, Urban Land Institute (PP): ULI was founded in 1936 by a group of real estate entrepreneurs who lifted the sights of that profession and created an institute that has had a dramatic impact worldwide on real estate and urban development practice. We are a members-only organization, and have 40,000 members all over the world. Our mission is very specific: to provide leadership in the use of land to help create and sustain thriving communities worldwide. Our members encompass the entire spectrum of land use decision makers, including architects and planners, the whole spectrum of professional services associated with real estate and urban development, as well as the people who provide equity and debt capital to fuel the process of urban development, policy makers who help regulate it, and others. It’s a very diverse group. We’re best known for being a developer’s organization.

SSS: Christopher, since you chose the title, “Individual Work Space: The Nail in the Coffin,” could you expound on what it means? 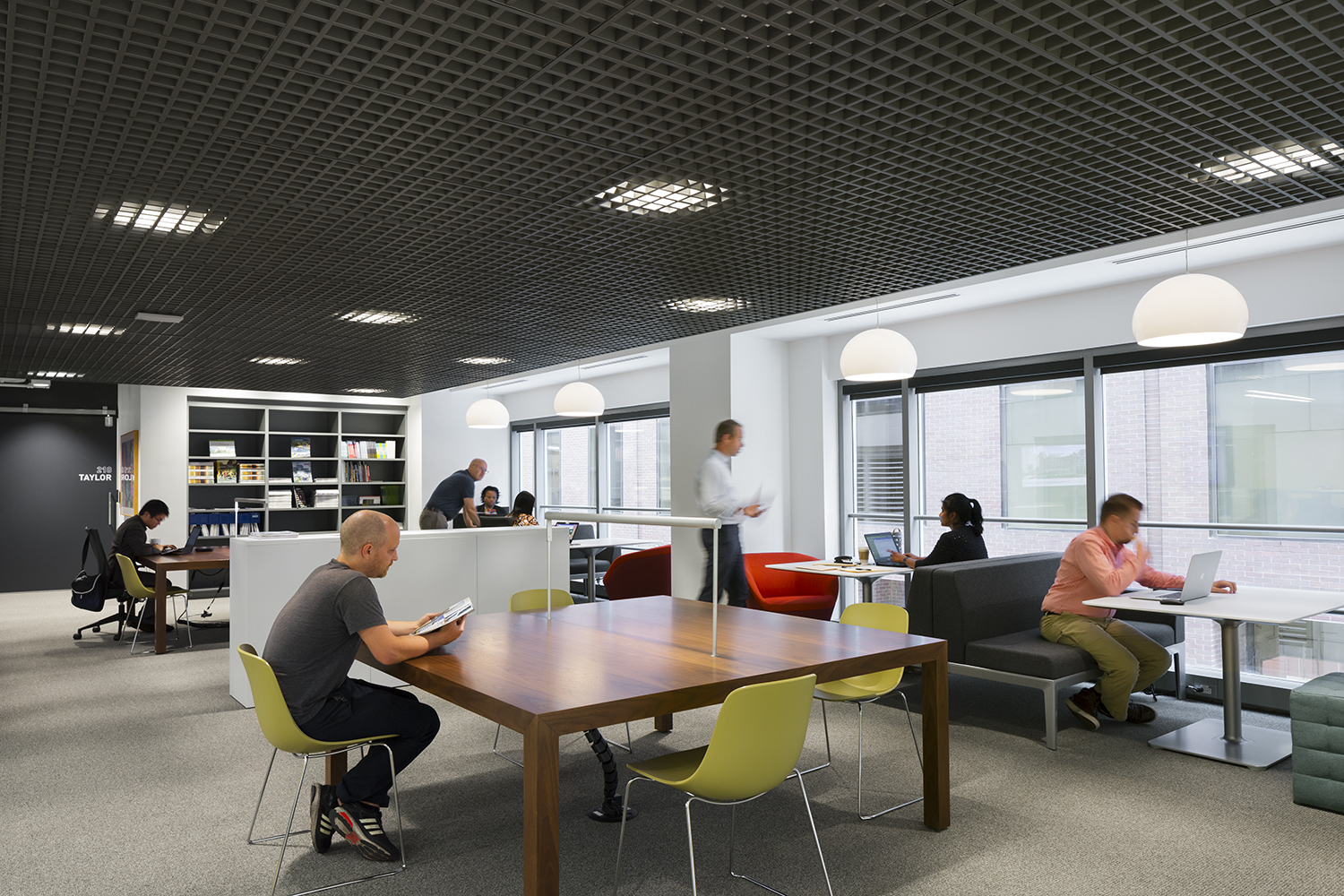 Christopher Budd, managing principal, STUDIOS Architecture (CB): For many years, we’ve been questioning the validity of organizations that base their spaces primarily on the individual when, if we are enterprise-focused organizations, everybody should be contributing to the enterprise. It’s not that the individual is not important, but what you do for the organization and how you maximize your contribution takes priority. Why would you build a space for the collective and come work by yourself? Instead, we ought to focus on expanding spaces that bring people together, and ignite passions that reach the mission of the organization.

PP: As clients, we benefited tremendously from having a poor performing office space and low expectations [laughter]. Our previous space was not functioning well. It was the old law firm model: offices at the window and interior high-walled cubicles. The common impression when someone arrived at ULI was that no one actually worked there because you couldn’t see anybody. I think the employees probably didn’t want to work there either. I’ve been the CEO for seven years. Connection, collaboration, and contribution became the core elements of our strategy and the old space simply didn’t support that.

Sherry Cushman, executive managing director & leader, Cushman & Wakefield (SC): Searching for a real estate solution gave the organization an opportunity to reinvent itself. The restriction was that we didn’t have a ton of money. The original directive by the CFO was, “We can’t spend a dime more in rent than the last year of our lease.”  One thing we did in order to achieve those costs was look at workplace strategies and space efficiencies.

CB: It’s a complete reversal of what we think of as a programming process, which is typically about fitting a program into a building rather than looking at the opportunities for the business to grow and thrive. The new process looks at organizations as businesses. We no longer look at the individual level and worry, “Does this person have enough privacy? Do they have enough storage?” Technology and mobility have taken care of that, and we can give people choices and make them responsible for contributing and working where, how, and when they do best. 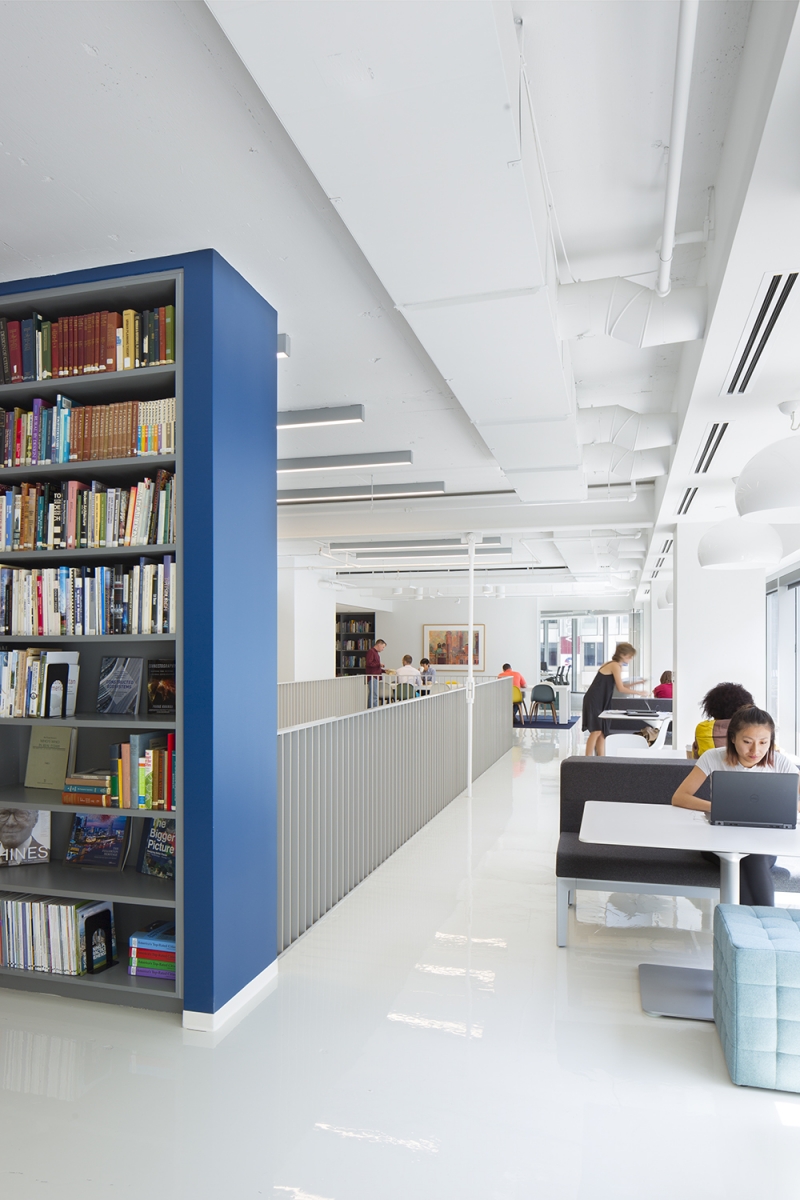 What we never solved for years was, “How do we make collaboration spaces that look good?” However, soft chairs might be trendy, but if they’re not connected to purpose, passion, and what that organization was doing, nobody uses them.

SSS: And so, how did you create a planning group and why did you call it Team Treehouse?

PP: The internal group we formed to make decisions about the new space was named Team Treehouse after one of Airbnb’s most popular units. But I also like the idea that it’s a little bit untethered, a bit free-thinking or free-floating. We felt an obligation to our members and to the industry to push the envelope a bit. We wanted to demonstrate to our members and for the broader industry how things could be different.

We’d begun to do a number of things differently at ULI and we had some talented new people, so I tapped them. They represented different generations, operations, functions, and departments, different levels of career maturity. It was intended to be a broadly representative group, and they were there to learn. That was the common thread: willing to try new things. 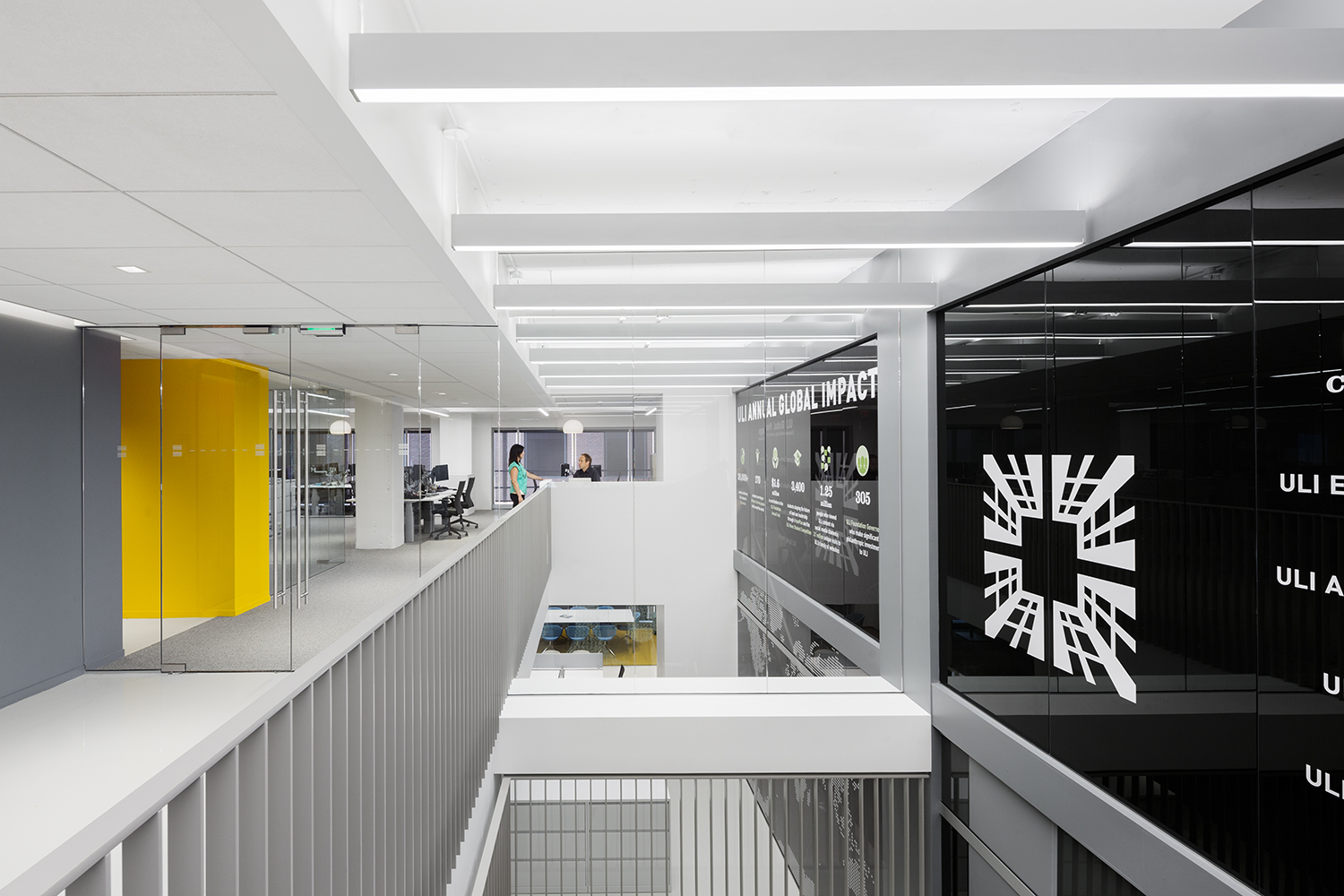 View of arrival atrium with ULI’s Mission on display.

We talked about ULI’s business goals and objectives. How has the organization shifted since its founding? In the last ten years? Where do they see it going in the next ten years? In the next twenty years? We actually recorded everything that we did. By that point we’d picked STUDIOS and we handed them everything and said, “Here you go. Here’s a starting point.” They started with a consumer that was actually a lot more educated than usual and had already built internal consensus.

SSS: And what did Team Treehouse identify as the worst kind of workplaces? 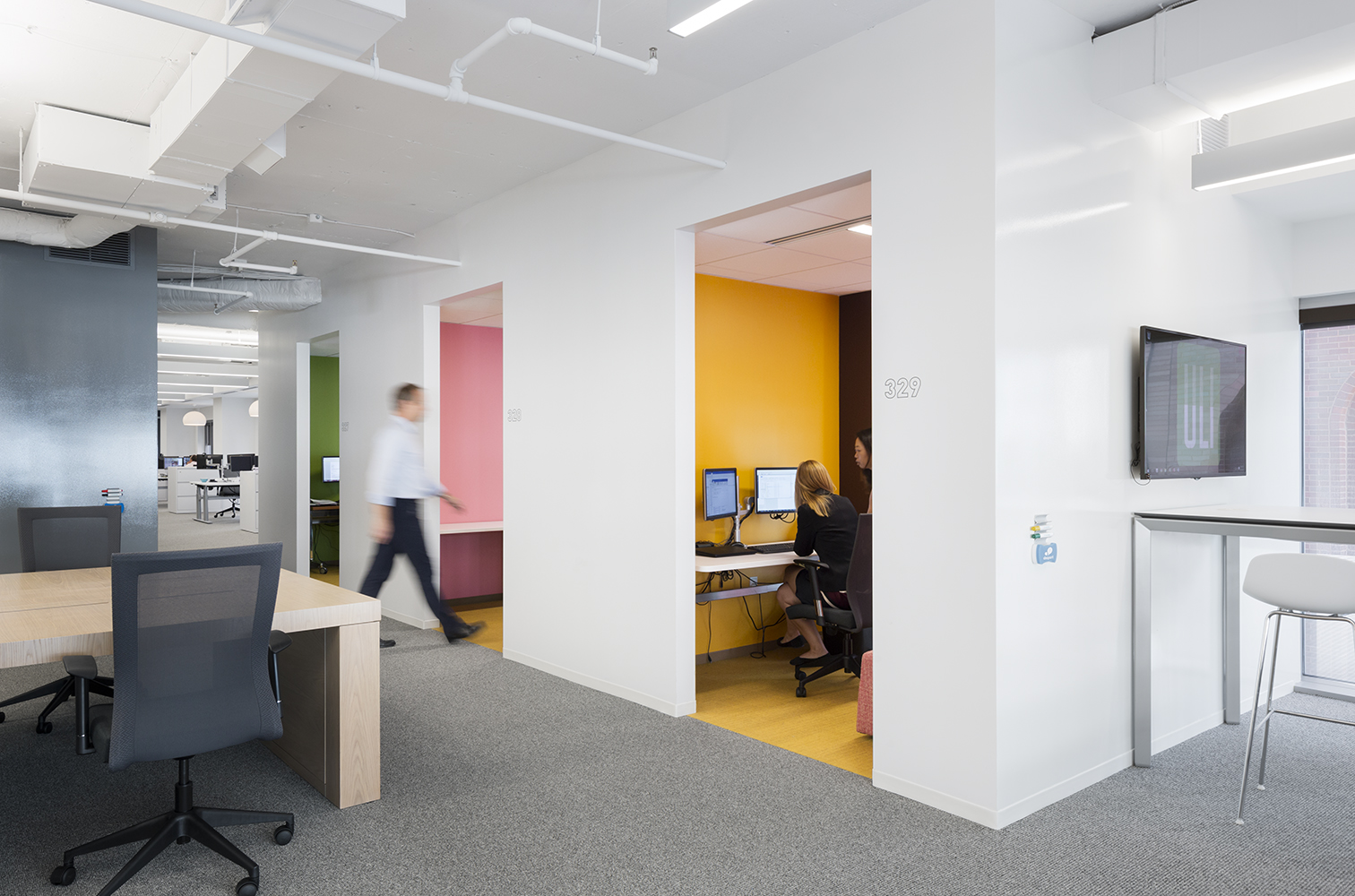 PP: We all agreed on the dysfunctional nature of what we had, which was a physical manifestation of a hierarchy and structure that was artificial and we wanted to toss it out. It was slowing us down, impeding communication and creating dysfunction in political dimensions that we didn’t want. It was clear we wanted to do things differently, which meant moving away from the concept of individual ownership and workspace, and toward something that would advance the organization as a whole.

Ruben Smudde, associate principal, STUDIOS Architecture (RS): For instance, they needed more meeting rooms and the kitchen wasn’t big enough for anybody to sit in. Sure, these are typical issues, but the overlaying thought was the real lack of connectivity. They couldn’t access the people they needed to talk to.

PP: There’s the more gregarious part of the organization which is about convening major events and external communications, like the magazine and the website. That group is lively and social. Then we have a big back of house operation: accountants, IT, HR, and so forth; let’s say “the numbers” folks. In our previous space, what was missing from this equation were our members. Previously, they would come in twice a year for big board meetings, but they wouldn’t have a day-to-day presence. There are over 2,000 members in the Washington area and we host over 60 events there annually. They almost never occurred within our space, and I felt strongly that our staff needed to see members on a daily basis

SSS: So let’s get specific. What are “the numbers folks”  getting from the design as opposed to the gregarious types?

Marnique Heath, principal, STUDIOS Architecture (MH): We have open, interactive spaces as well as more reclusive spaces for people who want to do more heads-down work. Some rooms are tucked away. There aren’t any doors, intentionally, on those places so that people can pop in, and no one has ownership of those. It’s first come first serve. There’s also a library, more of a retreat-type space at the back where the light is dimmer, the colors more subdued, the ceiling a bit lower. It’s intentionally designed to be a retreat within the space, away from the areas of greater activity. 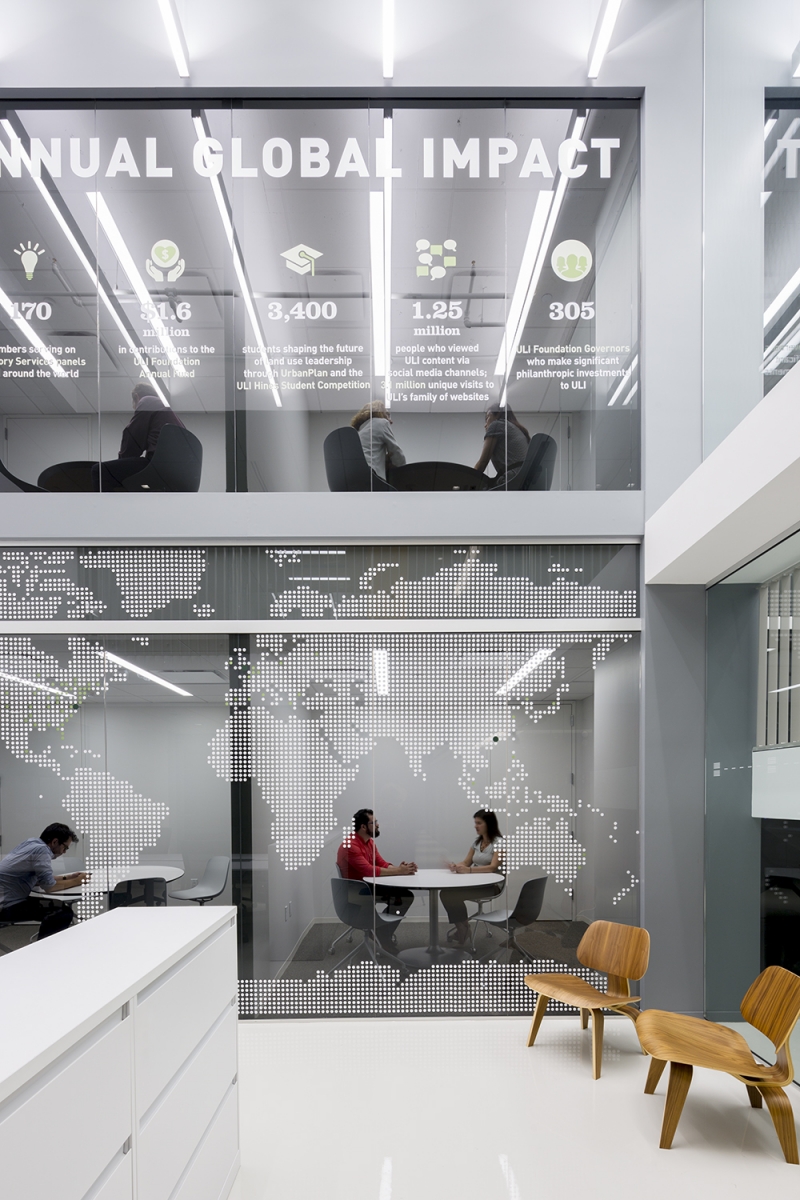 RS: Two important ideas are ownership and diversity. We needed to provide the right environments for different types of tasks. We have spaces where you can leave stuff behind, close the door, and come back the next day without anybody screaming about the mess. Rather than saying, this is for one group or another, we said, this is for you all. Having the entire building as a workspace puts both a responsibility and opportunity on the staff to pick the space they need.

CB: We don’t often think about the social nature of workspaces. For many people, meeting in a collective space takes energy away from them. They’re probably introverts, so it was important that they could opt in or out. You can opt out enough to observe but not be engaged. We aimed to create a range of engagement levels, which is very important to people who would have thought they needed a perfectly, private space. We made a conscious decision that almost 50 percent of the space would be shared between members and ULI staff, which reduced space that would have normally gone to pure work stations.

MH: Imagine you go to your office and there are never two days you’re guaranteed to have the same seat. It’s designing more to the job task of the day. For me, there are certain days that I need to be in a meeting room with six people all day.  Another day, I need to hunker down and read a document and I want quiet. The critique against open offices is that you may end up hating all the people around you. But here, the next day you can go somewhere else.

SSS: How do you all feel about this new phase of understanding our relationship with our physical environment and our instruments?

RS: We’ve learned through research that moving around or even having standing meetings is much better for you. Our movement has been liberated.  Not just physically, but even mentally, and yet we have trouble sometimes convincing clients to take that leap forward.

PP: Once we accepted that the only way to solve it was through a broad spectrum of choices, we no longer thought, “Well, a young person needs this, or a researcher needs that.” We stopped pigeonholing people and realized that everybody’s needs could be satisfied.

SSS: And how is the new place changing how you work?

PP: My workplace was hindering my ability to be present in the office as a leader and connect with my colleagues. Since we moved in, I’ve enjoyed moving around the space and understanding what’s going on. It will change the way I’m perceived by the folks who work here which is going to be very beneficial. 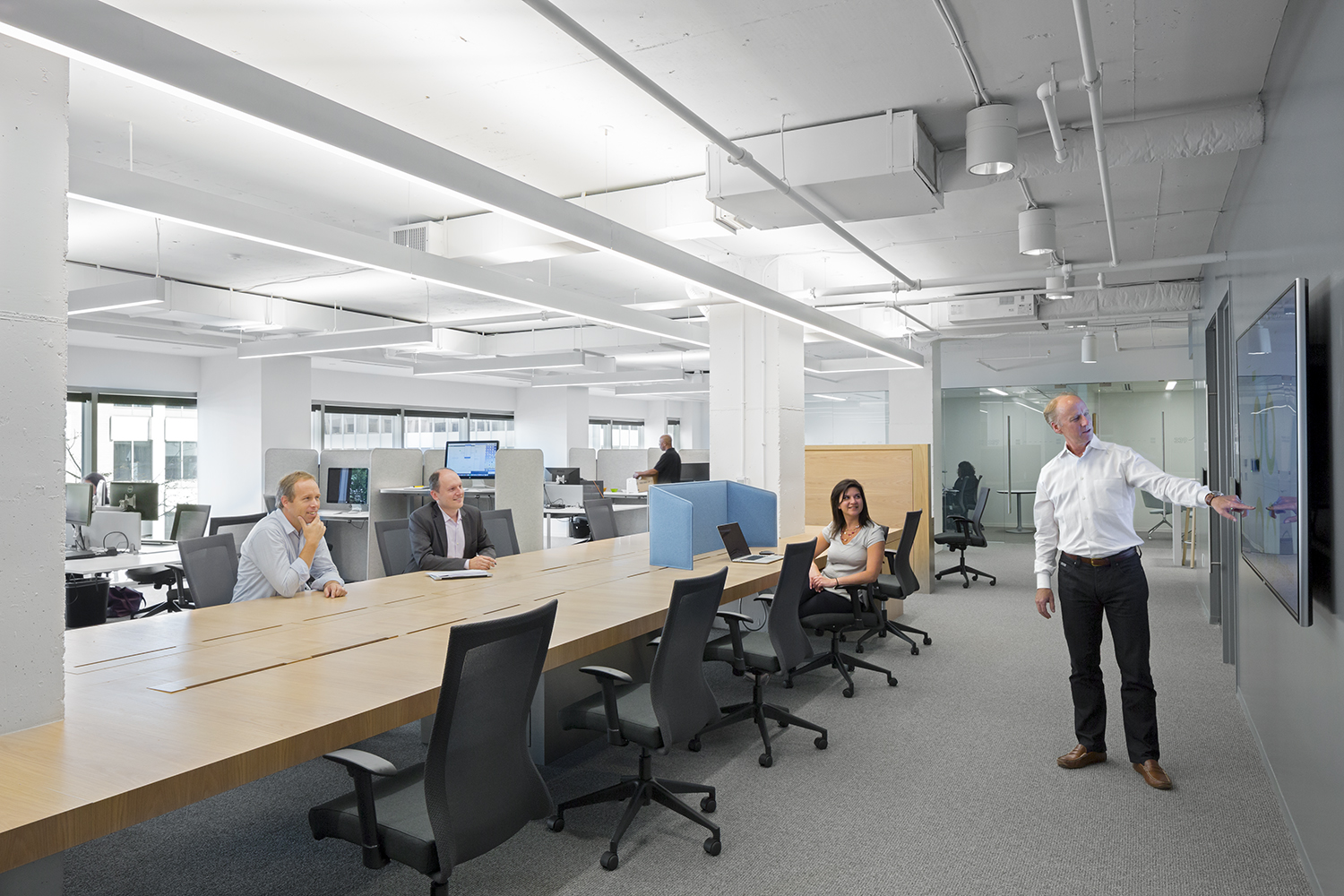 Team meeting at the hub table.

SC: At Cushman and Wakefield, projects like this take the word broker out of our vocabulary since we act more like an advisor. If we don’t understand the client’s business, we can’t possibly find a real estate solution for you. We spent six months in discussions to fully understand what they were trying to accomplish before we even looked at a building. The only way to stay competitive is to adapt to changing times.

RS: If it weren’t for a client like ULI, we wouldn’t be able to truly use our creativity and problem solving capabilities to bring the next solution. This gives me a lot of hope. We can soar and get a lot further.

MH: This project has reinvigorated my enthusiasm that organizations we work with can evolve. We can collaborate with them in ways that will bring new paradigms within the industry.

The Metropolis Think Tank series is presented in partnership with DuPont Surfaces, Sunbrella, and Teknion.