courtesy Blue Ventures Buckminster Fuller was an architect, but in the truest sense of the title, he was a problem-solver who viewed complexity with the eyes of a scientist. Upon his death in 1983, his family established the Buckminster Fuller Institute to carry on his legacy of visionary innovation through holistic, interdisciplinary, systems thinking to […]

Buckminster Fuller was an architect, but in the truest sense of the title, he was a problem-solver who viewed complexity with the eyes of a scientist. Upon his death in 1983, his family established the Buckminster Fuller Institute to carry on his legacy of visionary innovation through holistic, interdisciplinary, systems thinking to tackle large-scale problems that affect humanity. In his own words, “to make the world work for 100% of humanity, in the shortest possible time, through spontaneous cooperation without ecological offense or disadvantage of anyone.”

To help implement such lofty idealism the Brooklyn-based institute has sought to aid organizations and programs by awarding an annual prize of $100,000 through their eponymous Buckminster Fuller Challenge. In a recent Wall Street Journal article (“Changing the World One Space at a Time”, June 11, 2011) Elizabeth Thompson, the institute’s executive director, stated, “We require the people who submit their ideas to make a compelling case as to why the problem space they are particularly focused on is a key leverage point to turning the whole ship of state around.” She further elaborated how the institute does not prescriptively set the agenda for each prize. They leave it to those who enter to make the case for why their proposals deserve support. 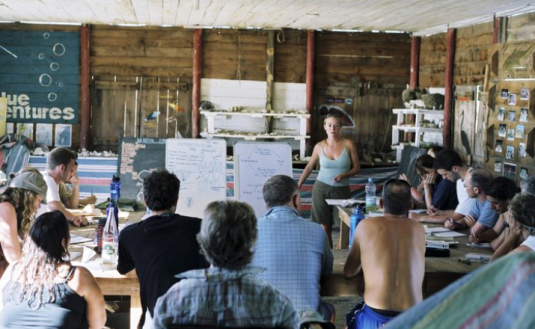 In keeping with the institute’s mission, on June 10th, this year’s prize was awarded to Blue Ventures, a London-based environmental organization led by founder and research director, Alasdair Harris, PhD. The focus of the organization is helping fishing communities located in sensitive coastal ecosystems, primarily in Madagascar, deal with dwindling natural resources.
As juror Allan Savory noted, “Blue Ventures integrates the regeneration of the environment, on which people depend, with the stabilization of population and resources. With continued success this could carry through multiple generations as the ‘norm’ which is key to lasting sustainability and I see no reason to confine their overall strategy to marine environments.” According to the official jury statement:

Blue Ventures has been a standout in this year’s competition because of its successful scaling and its rich, insightful problem solving approach. By addressing the root causes of the challenges that these fishing villages face, Blue Ventures changes the way people interact with oceans and lays the groundwork for long-term behavioral change. Its full range of economic development initiatives offers each village numerous opportunities for community-owned conservation management that take this program well beyond the typical confines of science-based marine conservation.

One of the key concepts of the Challenge is to pursue what Buckminster Fuller called “comprehensive anticipatory design science.” This year’s jury concluded that Blue Ventures, with its all-inclusive approach to fishery conservation and cultural sustainability, best embodied the systems approach to problem solving Fuller came to believe so strongly in. In a justifiably biased way, this is one of the primary criteria for winning the prize.

While this sort of systems thinking is now readily applied in diverse fields including economics, conservation, science, medicine, and business, when Fuller first articulated it, it was considered revolutionary and somewhat controversial because of the disciplinary boundaries it called into question. Now, such “interdisciplinary” methodologies are viewed as de rigueur when approaching complex issues—especially environmental ones.

Blue Ventures seems to hold out a promise that their local, community-based initiatives for dealing with ecological balance and social empowerment could be scaled up and applied to other “problem spaces”. In the meantime, what the organization is currently achieving around the coastlines of Madagascar, Belize, and Malaysia, seems enough to generate hope that at least part of Fuller’s “100%” is being helped. If Fuller was right, and I hope he was, perhaps we all benefit when something good happens on a small scale on the other side of the world.

We featured Allan Savory, last year’s winner of the Buckminster Fuller Challenge in our October 2010 issue, and also featured him on our blog here.