Swoon and the Sea

A flotilla of quixotic boats have washed ashore behind Deitch Studios in Long Island City. They look like they might have been slapped together from trash by survivors in a desperate attempt to escape shipwreck on a lonely island-and in a way they were. But these boats have all their permits and registrations in order, they’re seaworthy, and more than anything they’re an inspiring example of the New York waterfront coming back to life.

Swimming Cities of the Switchback Sea creates an imaginary world that’s at the same time produced as a real place by the presence of the boats and the performance taking place inside them. It’s a magical place set against the skyline of Manhattan -supplemented during the September 11th performance by the Tribute in Light to fall of World Trade Center-in which the public is not only gazing distantly at the water but also vicariously floating in it, being affected by its waves and tidal currents, participating in it as a primal force.

The seven junk rafts were built from salvaged construction materials according to intricate balsawood models designed by the artist Swoon, whose corresponding exhibit at Deitch’s new gallery in Long Island City became an excuse for a month-long voyage down the Hudson. The rafts have been trawling the river from Troy, New York, to the Upper West Side and across New York Harbor, performing a little drama for towns and villages along the way. For the next few nights, the 40 or so (slightly precious) hipsters on board will be amplifying their performance against the backdrop of midtown Manhattan. 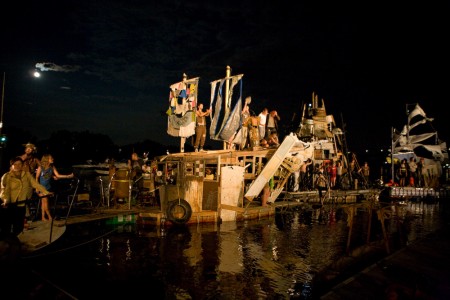 The drama, composed of a series of testimonial vignettes by characters aboard the ships, culminates with a momentous question: why are we doing this? It’s an existential question that every New Yorker has to answer at some point. “Because we stopped being able to imagine a happy life” is the first devastatingly melancholic answer. Why take to the water? “To continue the drift we were born into.” The question is asked differently and answered differently, again and again, like a reporter dissatisfied by pat answers, but ultimately the only good answer is to go to the water and find out (Happening rain or shine on Friday and Saturday at 8 PM).