This week is shaping up to be the perfect time to show the amazing things that are afoot in the realm of technology. Tomorrow marks the second annual Greener Gadgets conference, a full-day of discussions on the future of emerging technology and a showcase of forward-thinking gadgetry. And earlier this week an envoy from Intel’s Corporate Technology Group came to New York with Tech Haven, a showcase of the company’s buzzworthy and most cutting-edge projects. While these devices are still prototypes and further research is being conducted in their labs, a few are in working condition and it’s only a matter of time before we’re using them to get healthy, decrease our energy consumption, and impress our friends.

A useful project is Intel’s Platform Power Management research. It may not be much in the looks department, but it’s designed so that you won’t even notice it. This little device saves energy by powering down portions of the computer when not in use. But this won’t stop your productivity—it will “wake up” the program you need within a tenth of a second. Manny Vara, Director of Technology Evangelism (yes, it says that on his card) explained how, for example, a screen draws a picture 60 times per second. If nothing is moving on the screen—if you’re reading a news article or just staring blankly at your desktop—this is a waste of power compared to a static image. The same is true for other parts of the computer, such as a laptop’s constant search for WiFi networks even if the computer is stationary.

The group has discovered that smarter power management can result in 35-50% power reduction! Vara notes that many of the current systems run on legacy technology. “A lot of technologies in computers were invented a long time ago. Twenty years ago, when there were fewer computers, energy consumption was not a priority.” With today’s exponential amount of computer users that energy power really ads up. 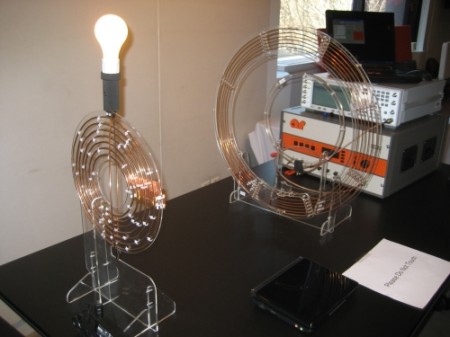 On a more visually interesting level is the company’s research into wireless power transfer. Imagine being able to recharge an electric device with no cord! Literally through the air! The box on the right side of the picture is plugged into the wall, but notice that the illuminated device is plugged into nothing. It operates by means of induction and resonance. This model works at a distance of up to about two-and-a-half feet, but R&D teams at Intel are playing with shapes for a greater range. Intel’s David Meyer imagines larger coils can be built into a flat-screen television, so your laptop and cell phone could be recharged just by being in the same room as the tricked-out TV. 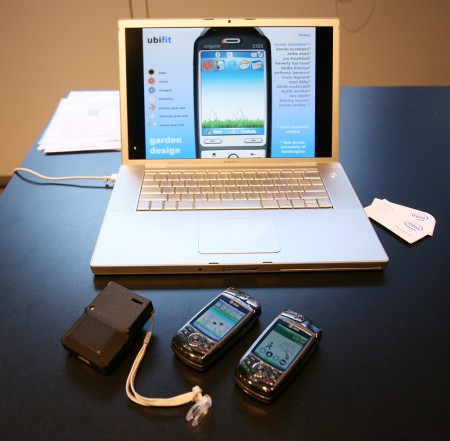 Research staff member Sunny Consolvo is working on an interactive cell phone application to keep people healthy. Ubifit (shown on the cell phone on the left and computer screen) tracks the user’s physical activity through a monitoring device to wear and journal entries. Using garden imagery, each flower represents a different type of physical activity and butterflies appear on the screen when you reach your goals. A quick glance at your phone can now tell you how much fitness you’ve packed into your week

Similarly, UbiGreen (shown on the cell phone on the right) tracks a user’s sustainable transportation choices. “Green is not usually the first consideration in people’s transportation choices, it’s usually second or third,” Consolvo explained. “So the application shows other values associated with each form of transportation.” If the environment is not an important enough consideration, the application also shows you how much money is saved or how much exercise you can get. 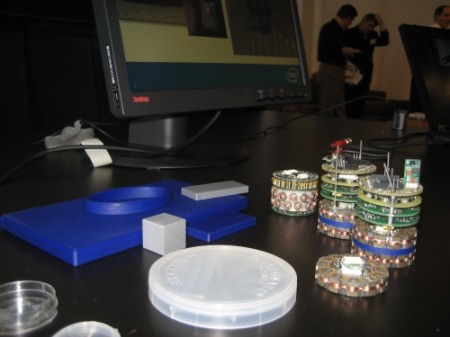 Finally—and here’s the real sci-fi fantasy stuff—is the robotically transforming device that changes size and shape depending on its function through the use of programmable matter. The impetus for this project was Jason Campbell’s, Senior Staff Research Scientist, dissatisfaction with his mobile phone. He explains that it’s too big to be a comfortable phone and too small to be a reliable device to type on. His solution: a device that changes sizes depending on the task. (In the above photo, the morphing is represented by the blue and grey forms—large to type on, small to talk on, and bracelet-shaped for when you’re jogging.)

The science involves spheres, magnets, and polarity, and while it’s a few decades out still, they’re actually making progress. Campbell imagines a motion or pressure sensor to tell the device when to transform. While the potential is there for some shape shifting mishaps, (Is that a first-generation programmable matter device in your pocket or are you just happy to see me?) Campbell thinks the shift won’t actually be forceful enough to rip anyone’s pocket.

New technologies like these will be increasingly important in our personal and business lives. They may also offer some great opportunities for architecture and design practices. Could those copper coils fuel an office building? Will the next generation of efficient power management technology contribute to more comfortable interior environments? We’re at an exciting point in time where it seems if we can dream it, we can create it.