Ten Things I Learned at ICFF

What recession? As usual, ICFF was full of bizarre, bank-breaking booths, from Bernhardt Design’s cheesy, trip-inducing, scuff-marked white plastic flooring (below left) to Amuneal’s aluminum-tubing bunker (below right), complete with bent iron (looking) butterflies. It apparently took only four days to build, and, no, they don’t know how much it weighs (if you build something like that, you’d better). Nearby, brandishing an axe, Shimna woodworker Timothy Aaron Huston (above) explained his booth’s accessories, which, besides the hatchet, include a double-take-inducing stuffed rabbit. “I told my boss I needed a $100 eBay budget,” he said. Huston predicts the axe will replace the antler as this year’s pointless-in-an-urban-setting design accessory. We’ll see. 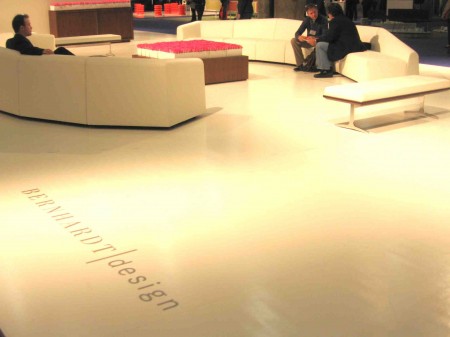 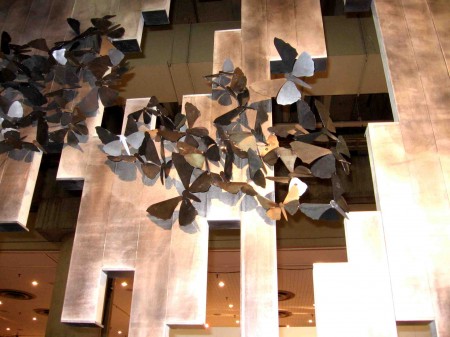 Shimna had a cupboard full of wooden blocks stamped with its website (bummer about the logo coincidence though). Panelite had bubbly little clear plastic bricks of their paneling. Both are sitting on my desk now, while the rest of the cards I got are…somewhere. 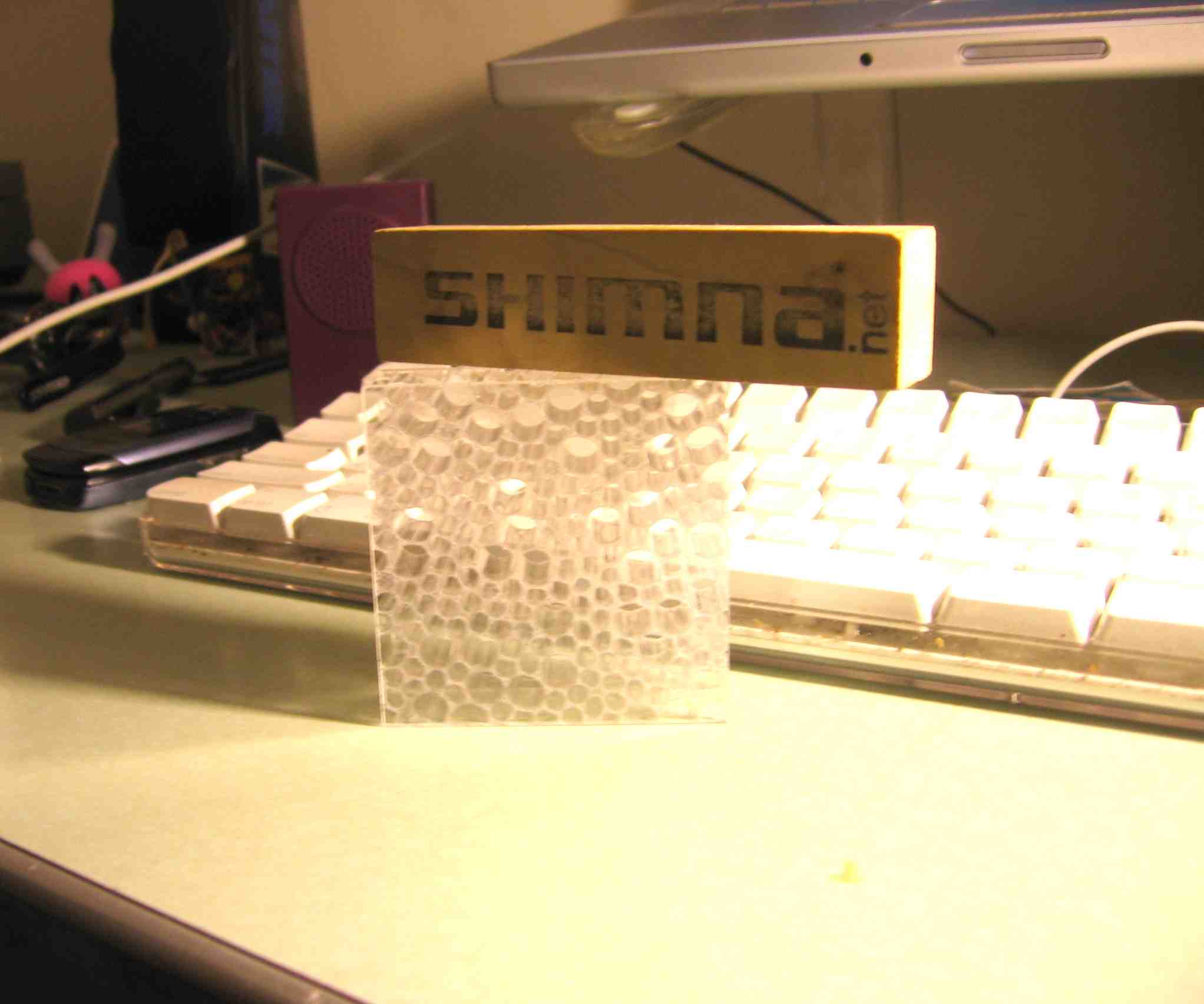 The mere mention of LEED sent a design-critic friend into a spaz attack on Monday—thankfully, there’s an alternative this year. One of my favorite booths (and, no, it’s not just because of the rabbit, or the business cards) was Shimna’s. They get their lumber from a family-run mill in western Pennsylvania and their metal fittings and glass tabletops from small businesses in the same town. (They’re keeping the location of this Rust Belt Cibola a secret.) Proof that high design can help the little guy, and look good doing it. 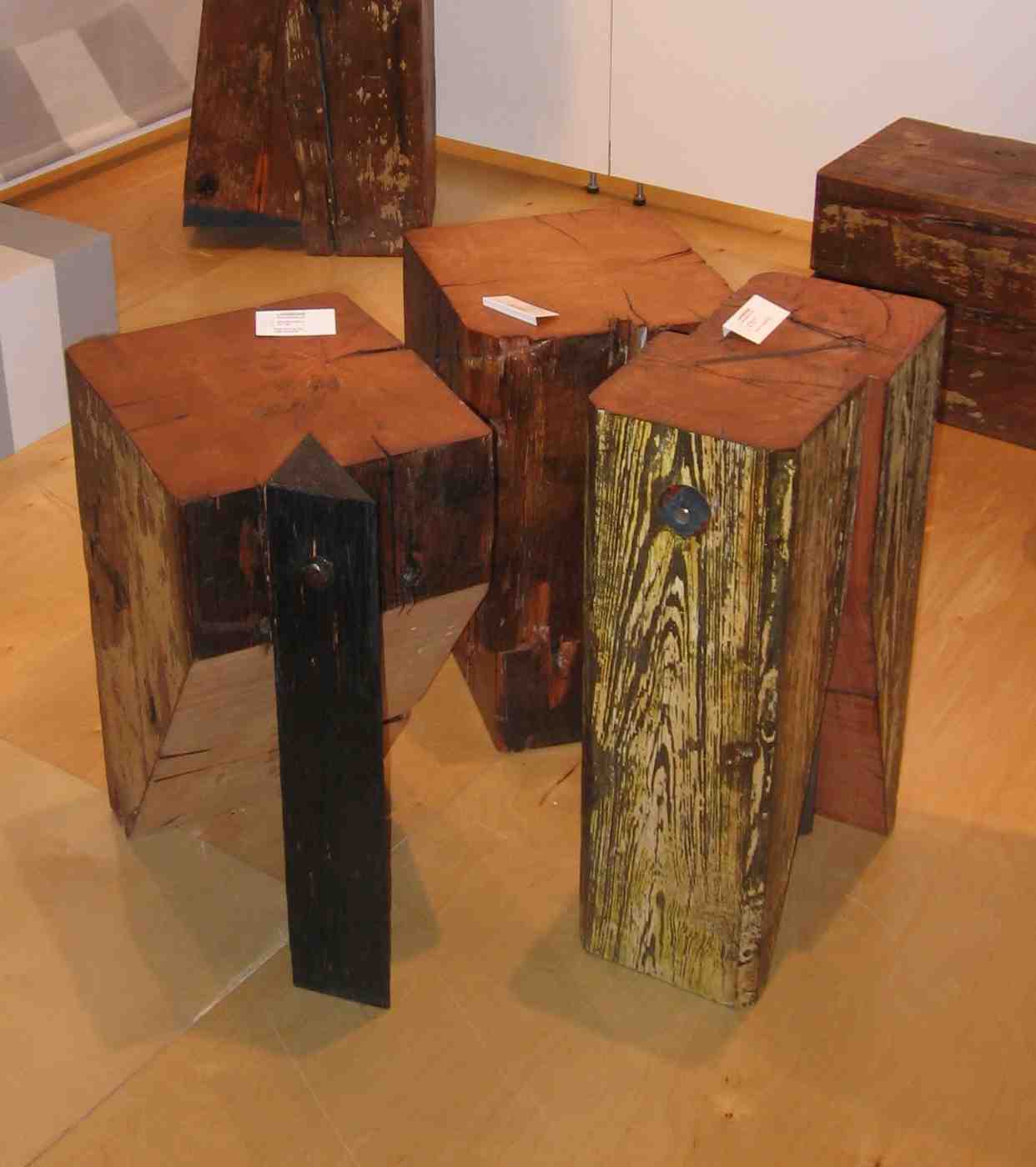 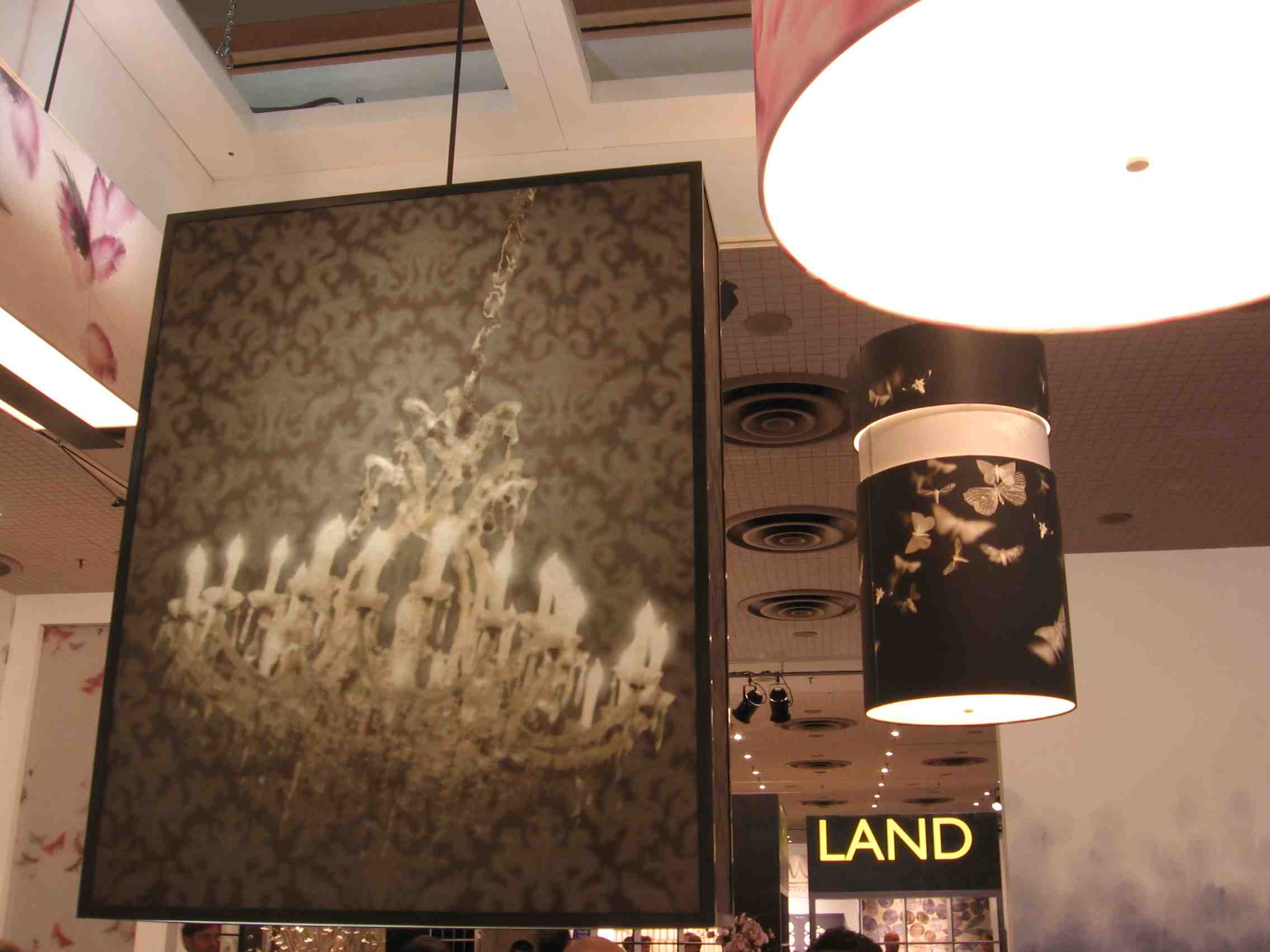 Like yesteryear’s woody décor, decorated walls are making a comeback. One of the coolest booths was from the New York wallpaper company Trove. They’ve recently expanded into prints for carpets and lampshades (above), and their booth was a jumble of all of them. Despite the predictable “we’re fine artists, not designers” spiel, the stuff was pretty awesome, especially since it offers the potential for a room carpeted, papered, and lit with the same pattern (“no need for drugs,” Jee Levin, Trove’s co-founder, told me). 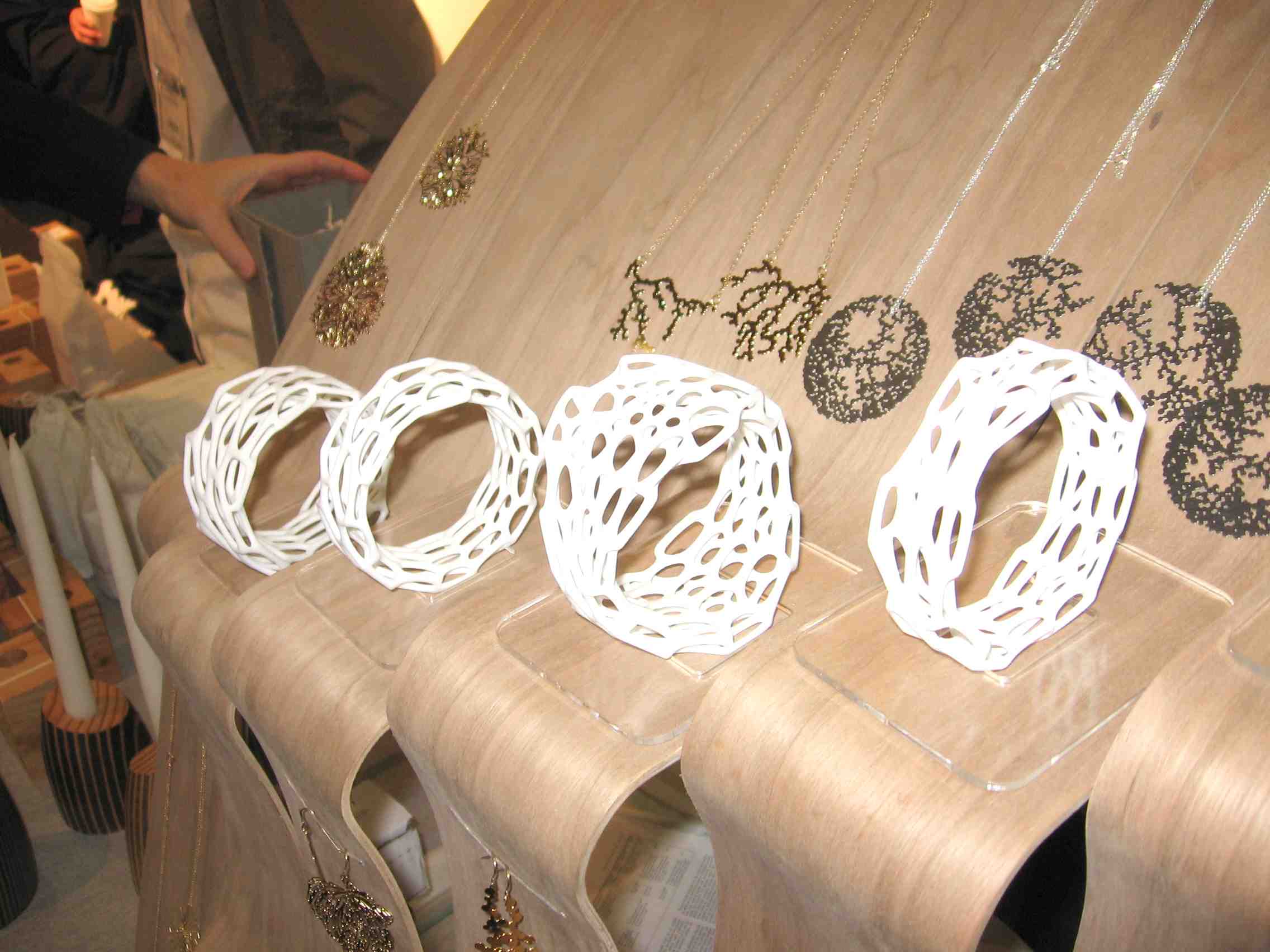 The Brooklyn neighborhood was all set to be the Next Big Thing, but never was. Similarly, rapid prototyping, like prefab architecture, has been a hot topic for years, but hasn’t amounted to more than hype. This year, I only saw one example: 3-D printed nylon jewelry (above) by Nervous System (started at MIT by a computer scientist and a biologist, natch). Their work is gorgeous—I wish there were more like it. (If I missed something, throw it in the comments.) 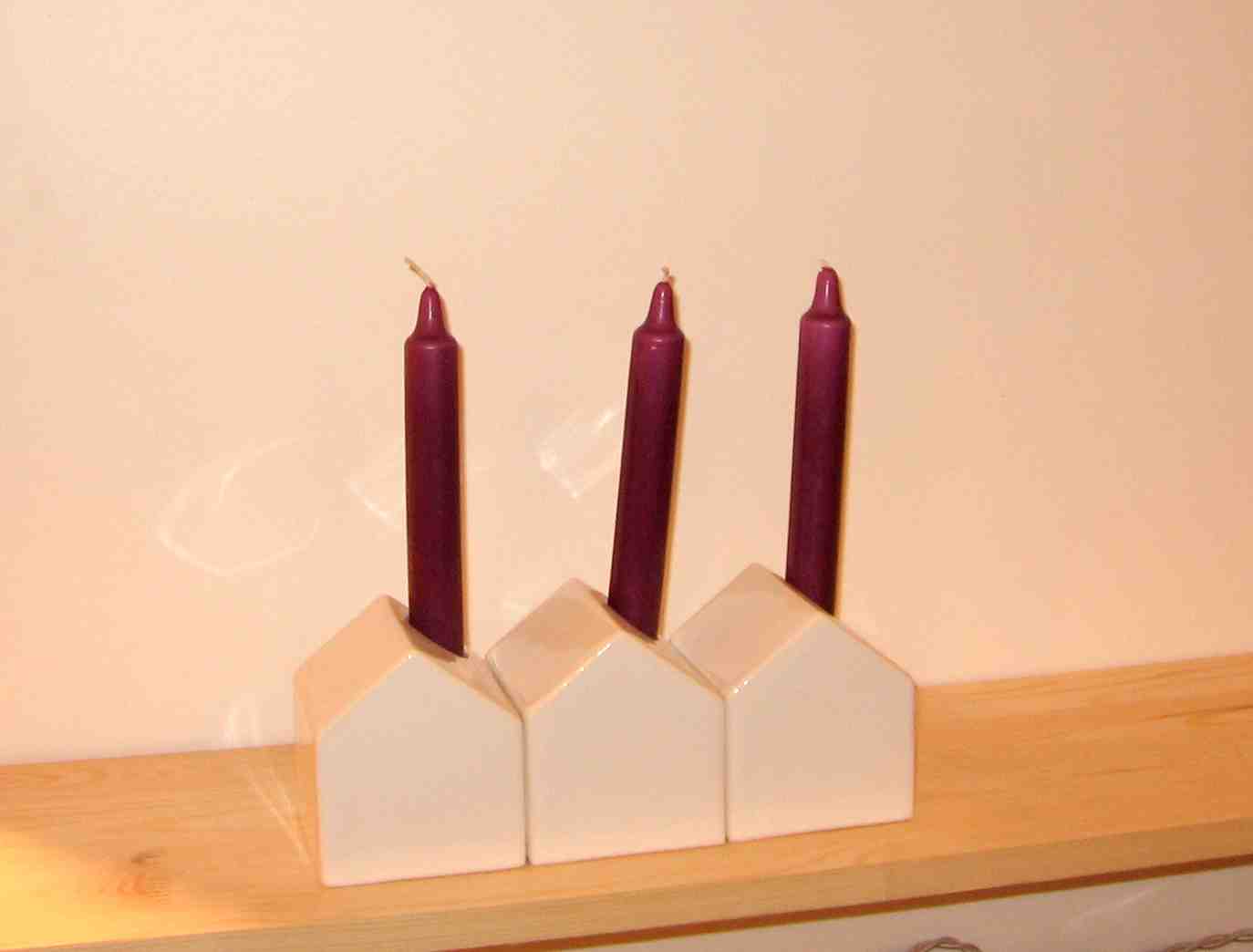 7. The energy crisis is so totally hilarious, you guys.

Brooklyn rock stars Design Glut can always be trusted with a global-warming joke, and they didn’t disappoint this year—I could’ve used their electrical-plug–shaped candles when my power went out last weekend. From the other side of the pond, with a more Dickensian theme, UK-based Sonodesign showed a candlestick (above) set in the shape of a smokestacked factory or a line of chimney-studded row houses. 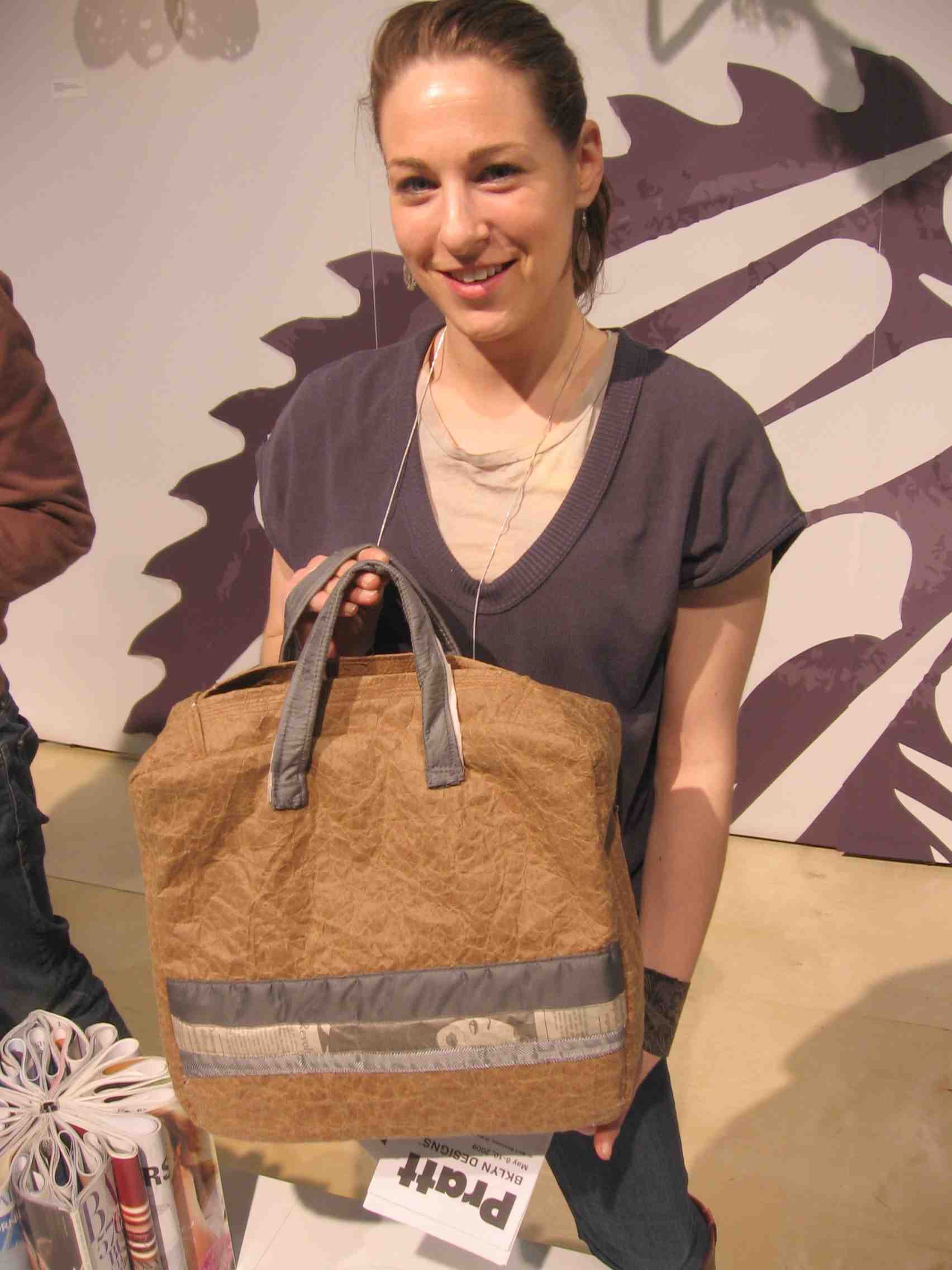 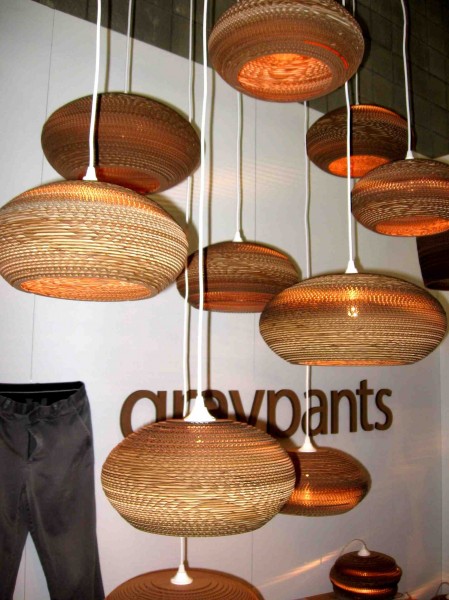 Pratt students clearly won this year’s eco-er-than-thou battle: their booth showcased housewares made from materials that cost less than a dollar. Most of the materials came out of the trash (old circular saw blades, old bottle caps, old magazines) and most were turned into stuff I’d actually use (scissors, fruit bowls, stools). True upcycling, not trash-to-future-trash (“Here,” says Mitch Hedberg, “why don’t you throw this away”). My favorites: Rebecca Marshall’s Paper Bailout Bag made out of oil-treated paper bags (above left) and Janelle Norton’s lawn sprinkler made out of an old office fire sprinkler. Then at the other end of the hall were Graypants’ scrap lights, beautiful UFOs of junked cardboard (above right). Hope it’s not a fire hazard—my sprinkler’s in the front yard. 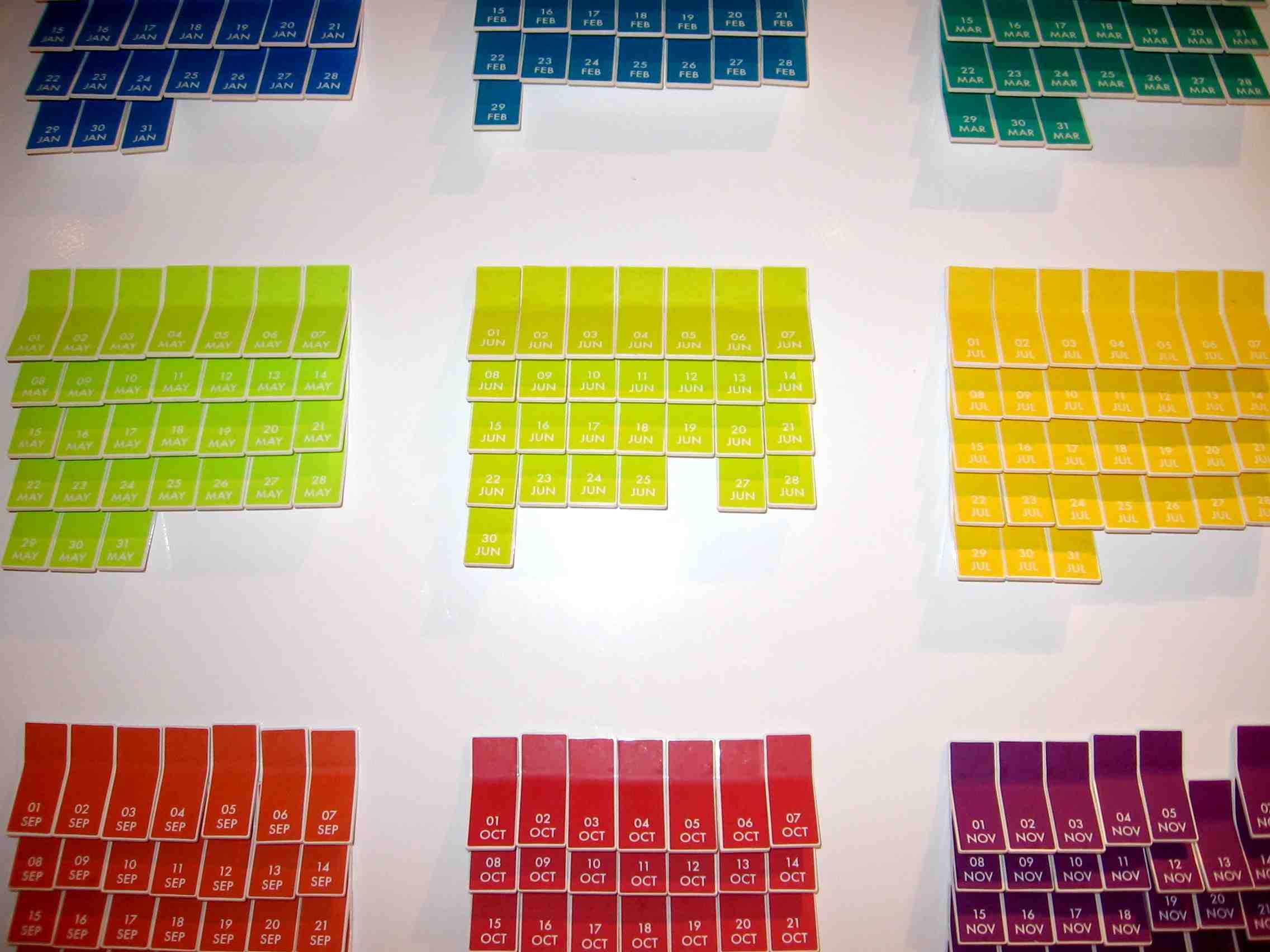 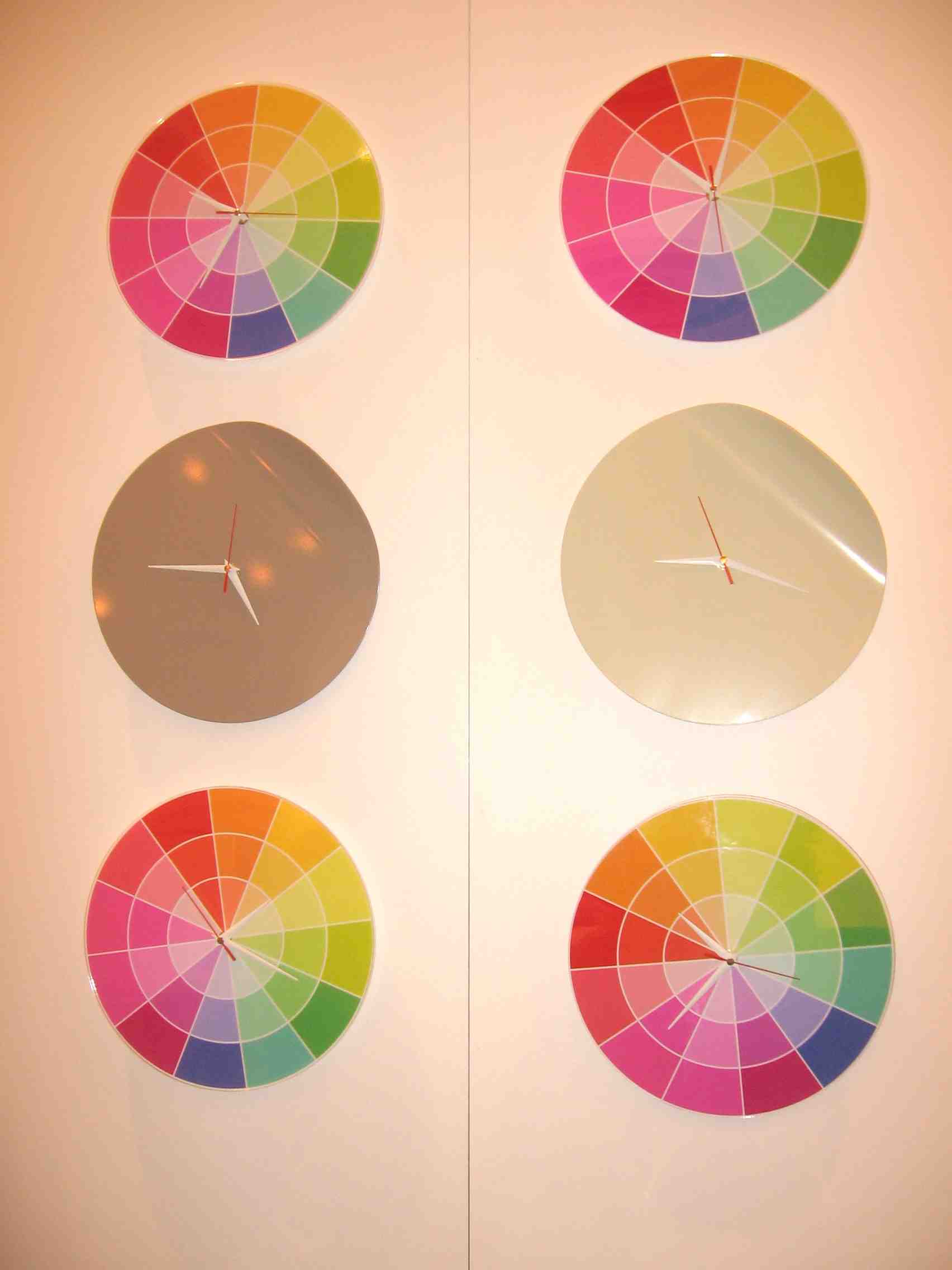 A couple designers didn’t look too far for inspiration—to the color chart pinned up above their desk maybe?—but I won’t hold it against them. Some days, oil bubbles right out of your backyard. But I wonder what it is about good old Roy G. Biv that brings time to mind. Both designs I saw were timepieces: StokkeAustad’s magnetic, Pantone-chip-themed calendar (above left) in the ABR booth, which I totally ruined when I tried to move the pieces around (stronger magnets next time, guys?) and Sonodesign’s color-wheel clock (above right). I guess you can rotate it however you want—just don’t forget what red-o’clock is (or would that be PMS185C-o’clock?) 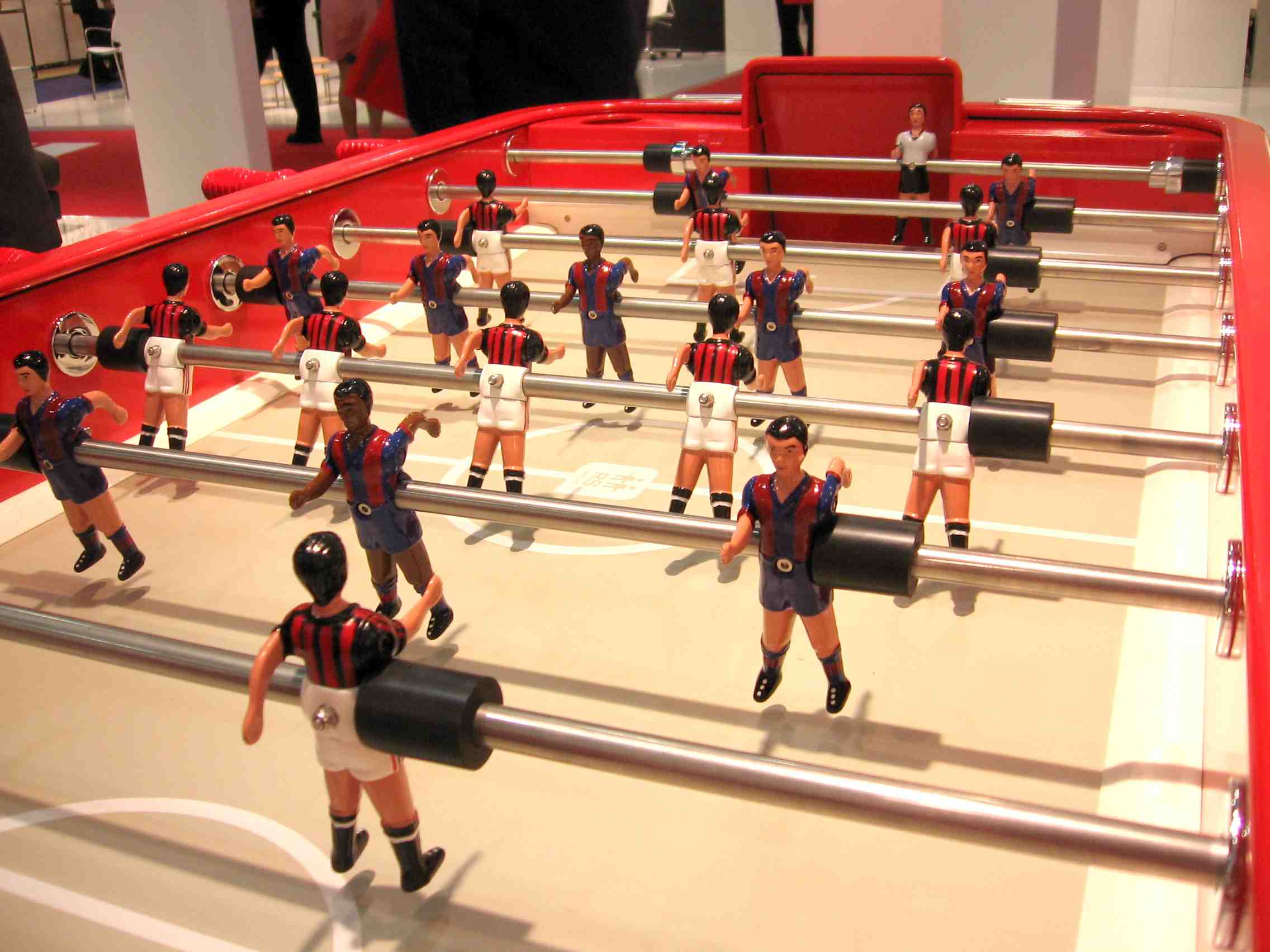 10. Spaniards have the most fun.

RS’s foosball table (above) was too awesome for ICFF—the fair organizers wouldn’t let the Barcelonans stage designer vs. designer (or writer vs. writer—I’m ready when you are, Eva) death matches. Something about it being too loud…or too FUN? Which, frankly, ICFF could’ve used. Overall, the fair was a bit more reserved, a bit more quiet, a bit more…dull than previous years. They tell me it’s the recession, but, frankly, I think design’s just getting boring. Some white plastic here, some varnished wood there (sustainably harvested, if possible) and you’ve got yourself a booth. If ICFF really is the “great social experiment” a friend told me it is, then where’s the experimentation?