The $5,000 Home for Developed Nations

The best thing about architects is not simply that they use cool software or design buildings or even that they can help create interesting spaces. The best thing about architects is that they solve problems. In school, as students, they are challenged to address social, cultural, racial, environmental, and not least, spatial, issues. Given the opportunity, they use their critical thinking skills to solve many different problems.

Based on this premise, architecture critic Guy Horton and I discussed the possibility of starting a round table or colloquium to brainstorm solving some pressing problems with architects and academics. Our efforts went nowhere. Then we read a column in the Economist suggesting that academics and corporations can do a lot when they combine their minds in “frugal innovation”. This includes things like the $300 house which, significantly, was a challenge put forth in a Harvard Business School blog, not aimed at architects.

Admirable as such projects are, they neglect poverty and homelessness in developed nations. This is a gross oversight. And it needs to be corrected. Pour populations in the U.S. haven’t received as much attention because, frankly, it’s less “sexy” to talk about urban poverty here than is in some exotic, far-flung place.

The U.S., Census Bureau statistics show that 19 million Americans live in extreme poverty (> $11,000/year income). Of these, children are disproportionately represented. Specifically, people under 18 comprise 25% of our population; according to the National Poverty Center, they are 35% of the  impoverished population. 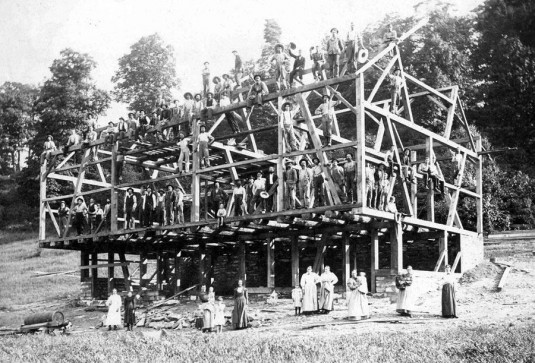 Poverty is over-represented in urban areas, not rural ones. So again, taking the U.S. as one example, about 70% of the homeless are located in urban zones, and of those, 30% are families. Additionally, homeless people with mental illness comprise anywhere from 1/3 to 1/2 of the homeless.

With such glaring statistics, how about turning our attention towards housing homeless families rather than criminalizing them? Maybe a group of critical-thinking architects along with economists, engineers, and social historians can’t solve this trenchant problem tomorrow. But architects do know a lot about creating space while taking into account social, cultural, economic, and environmental factors. And business people need to include them in any plan for “frugal innovation” which, apparently, can lead to positive economic and social outcomes.

The “Universal World House” (UWH) has had some success in developing nations like Angola and Zimbabwe. Made of cellulose (reprocessed cardboard and newspaper) and dubbed “SwissCell”, its pricetag is $5,000. But since in developed nations many of the poor live in dense urban neighborhoods or in industrialized zones, their needs are for permanence, security, and  not yards where they can slaughter animals.

Other architectural interventions include the sun shelter for L.A.’s Skid Row Lamp Community, a project I worked on and participated in milling the pieces, painting, and installation. While this project was successful, I kept wondering if there was something more we could have done, from an architectural perspective. Something that’s not about showing off our design “chops” at the expense of the intended users, like it happened with some attempts to help rebuild  New Orleans neighborhoods.

So the question I put to you here: Is it possible to design a home that is inexpensive, uses the newest technologies to control upkeep costs (as well as its carbon footprints) for that 30% urban homeless population? And I’m not thinking of FEMA-trailers and shipping containers.

We all know that the $300 house was an attention-grabbing gimmick. What’s more, it was for developing nations. So what is a fair figure for housing urban poor homeless families in developed nations? How about $5,000, a figure we arrived at independently of the UWH, which we came across while I was writing this blog.

Sherin Wing writes on the business and culture of architecture for ArchDaily.com where she is co-author of The Indicator. She is also co-author of the forthcoming book, The Real Architect’s Handbook: Things I Didn’t Learn in Architecture School. She received her PhD in the Humanities from UCLA.