The Garden That Climbs Stairs

Balmori Associates’ unusual design is one of 31 miniature urban parks built in Bilbao over the summer.

Bilbao might still be best known for a single museum, but civic leaders in the Basque capital have been aggressive in their efforts to revitalize the city through a series of broader urban redesign initiatives. In 2002, city fathers commissioned César Pelli, Eugenio Aguinaga, and Diana Balmori to produce a masterplan for the Abandoibarra area in the city’s downtown. Five years later, its government announced BilbaoJardín 2007, a contest that solicited designs for garden plots of up to 80 square meters (about 860 square feet), to be built on scattered sites throughout the city. And when that project proved successful–132 contestants entered, 27 proposals were built–the contest was renewed for the summer of 2009.

On the invitation of contest organizers, Balmori Associates (which worked on the downtown masterplan, and then judged Jardín contestants in 2007) contributed its own version to this year’s contest. Balmori’s park–descriptively named “The Garden That Climbs Stairs”–was completed over the summer, but photos just arrived in our inbox the other week. Sited between two Arata Isozaki towers, the miniature urban park is an arresting combination of native and exotic plants sidling up the steps leading to Santiago Calatrava’s Nervion River Footbridge. (Seen from above, it kind of looks like a cross between The Blob and the High Line.) For a look at the other winning entries–a total of 31 were built this year–visit the BilbaoJardín 2009 site; see more photos of Balmori’s climbing garden after the jump. 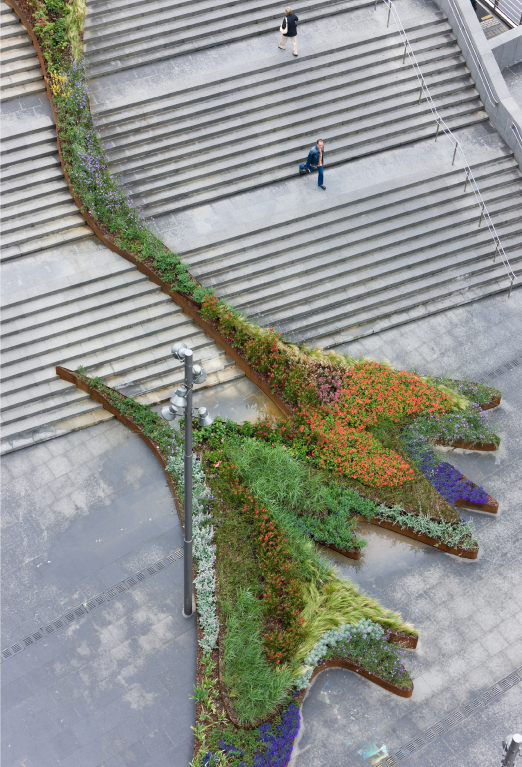 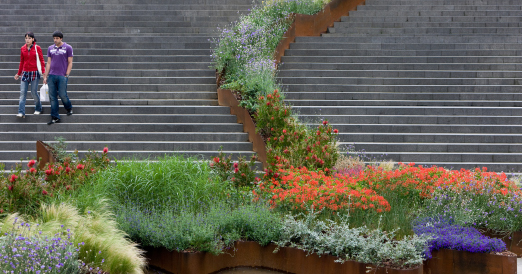 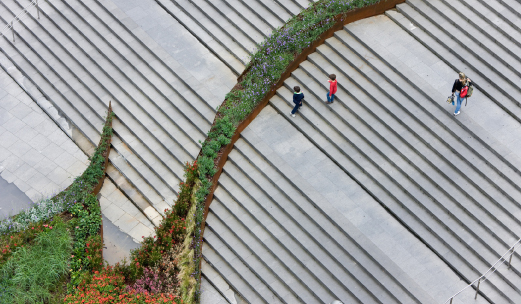