The Home of the Solar Decathlon

The 2009 Solar Decathlon at the National Mall. Photo: Richard King. The 20 international student teams participating in this year’s Solar Decathlon can finally breathe easy today. For the last month, the teams have been up in arms because the National Park Service revoked its permit to allow the Decathlon to take place at its […]

The 2009 Solar Decathlon at the National Mall. Photo: Richard King.

The 20 international student teams participating in this year’s Solar Decathlon can finally breathe easy today. For the last month, the teams have been up in arms because the National Park Service revoked its permit to allow the Decathlon to take place at its customary venue, Washington D. C.’s National Mall.

The Decathlon, an initiative of the U.S. Department of Energy, brings together students from all over the world to build innovative energy-efficient homes. It has gradually become the United States’ premier solar energy competition, a visionary platform for the sustainable technologies of tomorrow. And a big part of the competition’s prestige is that it is always held on what is often referred to as the nation’s front yard. But on January 11, the participating teams were told that a new venue had to be found, because the Department of the Interior (DOI) was worried about ruining the grass.

The National Park Service, which works under the supervision of the DOI, had found that the event just caused too much damage to the Mall. Apparently the trucks and cranes that delivered the houses left gouges and troughs on the lawns, and destroyed the grass. The Park Service revoked the Decathlon’s permit, and sent the organizers scrambling for a new venue. Alternative D.C. spots were suggested, like the Montgomery County Fairgrounds or the RFK Stadium. The DOE also began to consider other cities, like St. Louis, Chicago, or even Los Angeles.

The teams were not amused. For one, they had all already signed contracts that held them responsible for any damage to the National Mall. The Park Service’s concerns made no sense to them, especially when much more heavily attended events – such as an International Book Fair scheduled for the same time as the Decathlon – will still be held on the Mall. Secondly, in spite of organizing the Solar Decathlon four times in the past 10 years, it seemed like the DOE had not yet cottoned on to the fact that sustainability is inextricably linked to local conditions. For the homes to be energy efficient, they have to respond to the environment in which they are situated. The students had spent a year and a half planning precisely for the weather conditions on the Mall. A change in venue, especially to another city, would be disastrous!

The Decathletes mounted a vigorous campaign to bring the event back to the Mall. They got Senator Robert Menendez and Congressman Ed Markey to write two letters in their support, and then circulated those letters in the halls of Congress, soliciting the support of several other elected officials. They used the Washington Post and several other media outlets to put pressure on the DOI.

Finally, this morning, we have news that the DOI capitulated with a compromise. In a press release issued yesterday, the DOI and the DOE announced that the Decathlon will take place in West Potomac Park, a little south its usual location.  The venue, just south of the new Martin Luther King Jr. National Memorial, might even give the solar homes a better orientation. 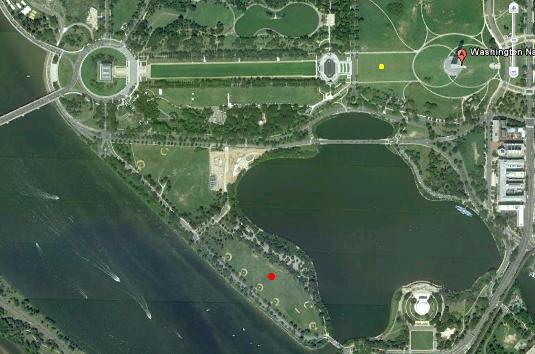 The proposed venue for the 2011 Decathlon, marked in red. The old venue, in front of the Washington Monument, is marked in yellow.

So may be all’s well that ends well. But the whole episode does leave a bitter taste in the mouth. It is incredible that the DOI would prioritize having an immaculate lawn over what has proven, year after year, to be a high-energy, much publicized showcase that has often pioneered the use of new technology in the service of the planet. It seems like our own supporters in government have yet to fully understand the significance of events like the Decathlon. Maybe it is time again to start a conversation about how we can truly bring the powers-that-be on the same page as architects and designers, so we can all equally commit to building a greener future.

Previously, Elizabeth Evitts Dickinson wrote about the 2009 Decathlon, and we’ve been following the progress of the winner, Lumenhaus. Plus, we got a preview of Empowerhouse, one of the entries for the 2011 Decathlon.