The Little House That Could

An innovative residence sandbags its competition to win the Curry Stone Design Prize.

In its inaugural year, the Curry Stone Design Prize, which seeks out designs that “improve the human spirit, increase awareness of the environment, or respond to areas of need in the world,”  bestowed its award to an ingenious shantytown composed largely of sandbags. The impressive roster of jury members–journalist John Hockenberry, architect David Adjaye, designer Renny Ramakers; and Michael Speaks, design scholar and dean of University of Kentucky’s College of Design–called the winning design “super-intelligent”. 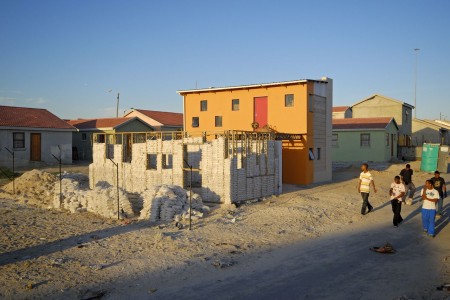 The winning design is a two-story timber-frame house with sandbag fill that requires no electricity or skilled labor to erect. It eschews traditional brick and mortar foundations in favor of the lower-cost structural frame, while also drawing from indigenous mud-and-wattle technique supporting higher thermal and sound-absorbing benefits. It is the work of South African Luyanda Mphahlwa and his pioneering architectural firm, MMA Architects.

The house was commissioned in 2007 by Design Indaba, South Africa’s premier design expo, as part of the 10 X 10 challenge pairing ten local and international design firms with ten families in Cape Town’s Freedom Park-a poverty-stricken shantytown on the outskirts of the city. It cost a low $6,900 to build, the meager amount budgeted by government subsidy for the construction of experimental homes. The current residents, the Jonker family, now live in their newhome with its built-in terrace and private garden–quite a step up from their one-room tin shack.

The fact that MMA has now received nine more commissions in Freedom Park based on their 10 X 10 Design Indaba house suggests the design has potential to become a prototype for broader efforts at low-cost, low-impact housing in South Africa’s poorer areas. Curry Stone’s choice to recognize a prospective prototype calls to mind the success of an earlier sandbag design. Nader Khalili’s Superadobe–the 2005 winner of the Aga Khan Award–consisted of concentric layers of sandbag reinforced by barbed wire. Highly insulated, resistant to earthquake and hurricane damage, and minimally labor-intensive to build, the Superadobe befit the needs of Muslim societies. But it was the technique of resourcefulness, not one specific house, that marked Superadobe as a socially innovative structure.

MMA Architects, headed by Mphahlwa and creative partner Mphethi Morojele, is a notable firm on the South African architectural landscape. As one of the few black-owned architecture firms in their country, they are both practically and symbolically vital to post-apartheid reconstruction. In Berlin in 2003, they built South Africa’s first embassy under post-apartheid governance. That building also represents the first major commission after the 1994 collapse to be awarded to a black-owned architectural firm outside the nation’s borders. Its incorporation of five elements (decorated stone, carved plaster, forged metal, basket weave, and carved wood) into one modern design earned it an Award of Excellence from the South African Institute of Architecture–again, the first award the Institute has granted any South African firm for a project on foreign soil.

MMA is also recognized internationally for their delicately soaring Faraday Station Precinct, Johannesburg’s multi-modal transport hub overhauled by the firm in 2003. MMA’s design provided a safer, more formalized infrastructure for commuters, transportation workers, and traditional medicinal herb sellers that dwell in the facility. It was featured in Tate Modern’s 2007 Global Cities exhibition as an example of positive structural growth in the complexity of diverse urban contexts, a topic enlightened by the Tate’s documentary video here.

Curry Stone finalists were unveiled at the Architecture Biennale in Venice on September 13 and the recipient of the $100,000 award was announced on September 25 in Louisville, Kentucky.